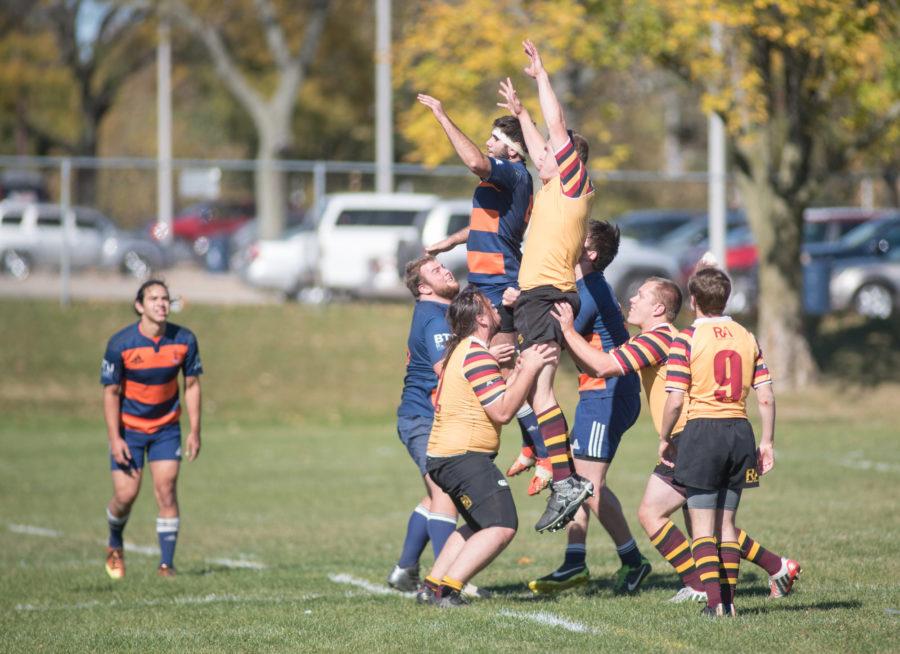 Richard Daniels gets lifted into the air by his teammates during a lineout in the game against Minnesota at the Complex Fields on Saturday, October 17.

Rich Daniels, the president of the Illinois men’s rugby team, circled April 2, 9 and 16 AGon his calendar as soon as the season schedule was set.

Those dates are the three seven-on-seven tournaments that decide if the team will receive an invitation to the Collegiate Rugby Championship in Philadelphia in June.AG

Michigan and Indiana, two Big Ten powerhouses, already received their invitations. AGThat leaves one CRC spot available from the Big Ten. With a healthier team this spring, Illinois hopes to capture that spot.

In there are seven-minute halves in a seven-on-seven game. AGThe pace is quicker than a game of 15-on-15. It also leaves more space on the field due to the fewer number of players, placing a greater emphasis on conditioning.

In 15-on-15, there are 40-minute halves. There is more emphasis on strength and technique.AG

“After the first game, we never really had a full lineup of everyone we needed,” said senior Mario LozanoAG. “We had to throw some of the newer guys (out there). They got some good experiences out of it which helps prepare them for this season.”

The Illini’s season ended at the Big Ten Championship Tournament when they lost their first two games against Michigan and Michigan State, placing them sixth overall.AG

This spring, Daniels is confident that the team will do better, especially with several key players returning.

One exception is senior captain Matt Ramsey, who has to sit out this season due to a torn ACL.AG

Although Ramsey may not be a contributor on the field this season, he is making an impact on the team by serving as the student coach for the seven-on-seven team.AG

He served as the student coach last season when he was healthy. His injury opens up the opportunity for him to coach full-time.

“It’s actually much easier now to only coach compared to having to coach and play because it gives you a much different perspective of the team,” Ramsey said.

By being a coach, Ramsey said he has to emotionally distance himself from the players. It was a tough transition for him but he considers it necessary because it allows him to push the players harder and correct their mistakes.

“Last year, I would have to make mental notes of what to correct for specific players and then give feedback at the next dead ball, but now I can pull them off to the side and nip it in the bud,” Ramsey said.

Lozano said that having Ramsey as the one guy to look over the team is critical for preparing for the upcoming tournament. Ramsey also designs and conducts the workouts.

“He has been putting guys through pretty rigorous (routines) and is really preparing them for this season,” Daniels said. “He’s been really on top of his game.”

Illinois began its season Saturday with a dominant team performance in the 10-on-10 Whiskey 10’s Rugby Tournament in Chicago. TAGhe team had two teams playing in the tournament: A team and the B team, with the A team featuring more experienced players.

The A team won the tournament convincingly, scoring a total of 165 points while allowing five. Each game had a margin of at least 30 points.AG

“We were a little shaky at first, but once we got our groove going, we were unstoppable,” Daniels said.

When Lozano exited the first game with a tweaked hamstring, the team had to move a couple people into different positions. Some players were forced to switch positions on the fly.

Lozano came back in time for the finals and helped the team secure the tournament win.

The B team played Eastern Illinois, Elmhurst College and Illinois State University’s A team, losing only to the Redbirds and not advancing to the semifinals.

The Illini have three weeks before they begin league play against Ohio State on April 2.AG