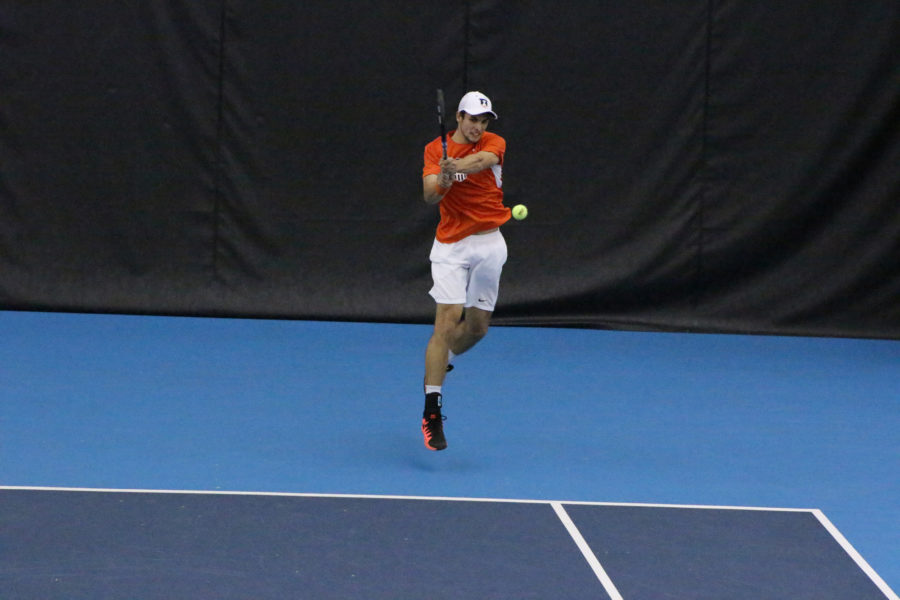 Illinois' Aleks Vukic returns the ball in the match against TCU at the Atkins Tennis Center on Sunday, Feb. 28, 2016

The Illinois men’s tennis team took care of business in its matchup against Northwestern on Jan. 23.JT

The Illini picked up a 4-0 victory against the Wildcats, capturing the doubles point and getting singles victories from sophomore Aleks Vukic, junior Julian Childers and senior Jared Hiltzik.JT

Saturday’s rematch was a different story.

The Wildcats jumped out to an 1-0 lead after winning two of the three doubles pairings.

On the singles side, many of the matchups were similar to the Illini’s previous meeting with the Wildcats.

Hiltzik, ranked No. 8 in the latest ITA National Player Rankings, competed in a rematch against No. 83 Sam Shropshire at second singles. Hiltzik was able to take care of Shropshire rather quickly in his last match, defeating him 6-2, 6-2.JT

The two players’ rematch had a much different outcome. Hiltzik took the first set 6-3 but dropped the next two sets. Head coach Brad Dancer said he saw a different Hiltzik on the court.JT

The Illini were behind 3-2 in the match after Hiltzik’s defeat. Vukic and freshman Asher Hirsch were still competing in their matches on courts 1 and 5, respectively.

No. 6 Vukic took on No. 11 Konrad Zieba for the second time this season. Zieba was unable to close out his top-10 opponent back in January, falling to Vukic in three sets. The two competed in a similar type of match this time around, turning to a third set to determine a winner.JT

The Australian native once again came out on top, taking care of Zieba 6-4, 4-6, 6-2.JT The dual match, tied at three, would come down to Hirsch and fellow freshman Ben Vandixhorn’s match.

Hirsch and Vandixhorn didn’t complete their match in the team’s previous contest.

On Saturday the two freshmen would take their match to a third set. Hirsch was unable to close out Vandixhorn after multiple match point opportunities in the second set, which went to a tiebreaker.JT

“I thought Asher had a good game plan going in,” Dancer said. “But once he lost a few of those match points, he got a bit tight and tentative.”

The third set was all Vandixhorn’s, who closed out the match with a 6-2 third set victory to seal a 4-3 win for the Wildcats.JT

The Illini fell to 7-6, while the Wildcats continued their hot streak, improving to 13-1.JT

This was the Illini’s Big Ten Conference opener, and they will play 10 more regular season matches against Big Ten opponents.