Illni fail to make their mark at nationals 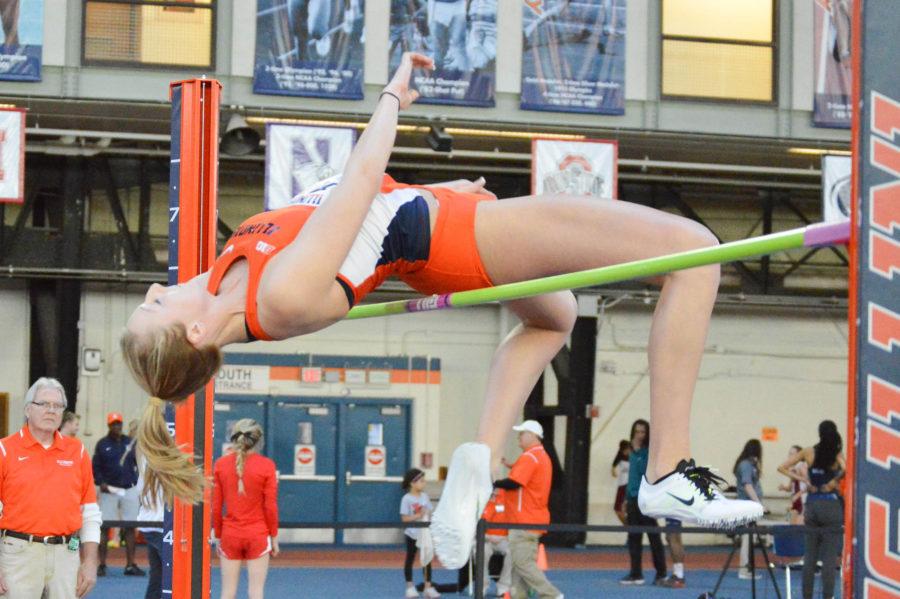 Illinois' Kandie Bloch-Jones clears the bar in the High Jump at the Illinois Orange and Blue meet in the Armory on Saturday, Feb. 20, 2016.

In their final performance of the indoor season, Illini sophomore Pedrya Seymour and junior Kandie Bloch-Jones were pitted against the nation’s best at the NCAA Indoor Track and Field Championships.

Seymour was the first of the two to compete — running the 60 meter hurdles — and she finished in 13thss. Only the top eight qualified for the finals.

She was unable to match her personal best time of 8.16 seconds that she set at the Big Ten Championships two weeks ago, but was able to record her second-fastest timess. She clocked in at 8.19 seconds, matching TCU’s Brianna McGhee and Florida’s Skylar Ross-Ransomss.

After feeling disappointed in her performance at the Big Ten Championships, Bloch-Jones was looking to improve her score and prove herself at the NCAAs. Instead, her cold streak continued — she was unable to clear 1.81 metersss, the mark she cleared at Big Tens.

Bloch-Jones had hoped to top 1.84 meters and match her personal best, but after clearing 1.76 meters she missed all three attempts at 1.81 meters. Despite that, she managed to tie for 12th nationally with North Carolina’s Nicole Greeness.

With the indoor season now over, Bloch-Jones and the Illini will jump right into the outdoor season at the Baldy Castillo Invite in Tempe, Arizona, next weekend. Seymour will not be traveling to Arizona, because she will be joining the Bahamian National Team at the IAAF World Indoor Championships next weekend in Portland, Oregonss.