Naleway's love for gymnastics and team keeps her involved 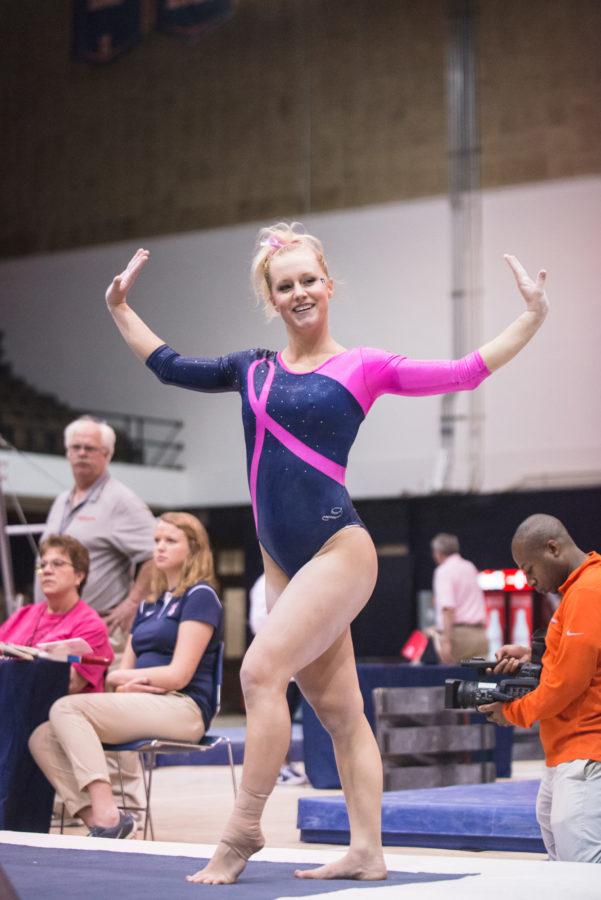 Illinois’ Jordan Naleway performs a routine on the floor during the match against Penn State at Huff Hall on Saturday, Feb. 1, 2015.  Naleway now works as an assistant student coach as she finishes up her undergraduate degree.

Then-senior Jordan Naleway felt a wave of sadness as the Illinois women’s gymnastics team prepared for its
final rotation Feb. 27, 2015.

She was set to lead off on floor, but this wasn’t just
another routine for her. The Illini were celebrating senior night, so Naleway
was about to perform in Huff Hall for the last time, leading to a buildup of
tears that inevitably spilled out of her eyes.

Naleway thought to herself, “Come on, you have another
event. Get it together.”

She did just that, taking the floor to perform her upbeat routine
at Huff one last time.

Over a year has passed since Naleway last competed at Huff,
but she has been a consistent presence at the team’s home meets this season.
She just hasn’t been sporting a leotard.

Naleway is in her fifth year at Illinois, completing her
dual degree of communication and social work. It’s the first time she hasn’t
been doing gymnastics — before completing her senior season, there wasn’t a
time she couldn’t remember not doing gymnastics. Now, as part of her degree, she
spends 32 hours a week doing generalist social work practice as an intern for the
Don Moyer Boys and Girls Club in Champaign.

She still makes time for gymnastics, though.

In between her internship sessions, Naleway heads to Kenney
Gym to act as a student assistant coach for her former team.

She approached head coach Kim Landrus about becoming a
student coach last year after her senior season ended, and Landrus was
immediately on board with the ideamp.

“She never does anything half-heartedly,” Landrus
said. “She puts everything into it, so I knew it would be a positive
influence.”

The gymnasts have felt Naleway’s positive influence in the
gym — a number of them mentioned Naleway being a positive person or bringing
positive energy to the team.

Sophomore Bridget Hodan and Naleway have a
“big-little” relationship like the ones found in sororities, which is
partially why Hodan said, for her, Naleway is “honestly one of the best
parts of this team.” Naleway has helped Hodan adjust to
leading off on balance beam, a position Naleway held last season.

Hodan isn’t the only one to rave about Naleway’s coaching
abilities on the event.

Sophomore Becca Cuppy has yet to officially compete at
Illinois thus far, but exhibited her beam routine Feb. 19 at Michigan
State. Naleway doesn’t travel with the team, though, so she wasn’t there to
witness Cuppy perform live.

The Illini already left Champaign when Cuppy found
out she’d perform on beam, so she texted Naleway about it. Afterwards, they talked on FaceTime, and all Cuppy wanted to do was “perform
well for (Naleway).”

She kept Naleway, who she called one of her favorite
coaches, in mind during her routine.

“I was thinking in my head all the corrections she’s
given me,” Cuppy said. “If I would fall or wobble, I would be like,
‘OK, what would Jo tell me to do?’ So it just really helped.”

Naleway does more than help prepare the gymnasts perfect
their routines, though. She also does her best to make sure they’re mentally
prepared.

Sophomore Jordyn Givens mentioned that Naleway is always
there for her when she becomes overwhelmed. In Givens’ first uneven bars
exhibition this season, Naleway reassured her of her abilities, telling Givens,
“Just relax. Trust yourself. Trust your training.”

Junior Erin Buchanan was watching her team’s 2015 highlight
video earlier this season, and she was caught off-guard when she saw Naleway, as if she didn’t recognize
Naleway as a gymnast anymore.

“It was almost weird seeing Jo in a (leotard) because
she has taken on the role of being a student coach so wonderfully,” Buchanan
said.

Naleway’s job is to help the gymnasts perfect their skills
in the gym, but she has done more than fulfill her role as a student coach. She
has gone out of her way to make sure the gymnasts are successful in and out of
the gym.

In the fall, Naleway tutored freshman Rachael Donovan in
Psychology 100 because Naleway had already taken it. This act is one reason
redshirt senior Sunny Kato thinks Naleway is, in some ways, still the “mom” of the team.

“No one on the team would’ve done that,” Kato
said. “But you know Jo would because she cares so much.”

Naleway gave up her title as “the team mom” last
spring, gifting her “Illinois Mom” T-shirt to Givens. But that hasn’t
stopped any of the gymnasts from still viewing her in that light — some of the gymnasts
still call her ‘Momma Jo’ sometimes.

Donovan, who wasn’t around when Naleway was officially the
“mom,” has witnessed her motherly qualities and agreed that’s a role
she still maintains. Buchanan can’t see Naleway’s mom role ever changing.

“I don’t think anybody could take that away from her,”
Buchanan said.

Naleway is accompanied by another student on the coaching
staff, Maci Sump.

During practices, the two coaches are never assigned to the
same event, but that distance doesn’t stop them from communicating. Amidst the
sounds of gymnasts practicing and various apparatuses separating them, Naleway
and Sump sometimes wave at each other from across the gym.

Sump joined the women’s gymnastics program at the start of
the school year as the volunteer assistant coach and is pursuing her
master’s degree in athletic coaching education, but has known Naleway for
years.

Sump is a Michigan native and Naleway hails from
Vernon Hills, Illinois, and the two competed against each other in the same region before college. They even took a recruiting trip to Illinois together
during their junior year of high school but went their separate ways
afterwards.

Sump was a gymnast at West Virginia for two years before
becoming the team’s student volunteer coach, so, unlike Naleway, she has some student coaching
experience. But that hasn’t stopped Sump from going to Naleway
for guidance.

Naleway said her job has been fun, partially because she has
Sump, her friend and someone of the same age, with her on staff. But even if
that weren’t the case, she’d still find her job enjoyable because she’s working
with the sport she loves.

Around 5 or 6 years old, Naleway stood on a low beam at the
Gymnastics Spot in Mundelein, Illinois. She went through motions from one end
of the beam to the other, thinking the people watching outside believed she was
performing her actual routine.

Naleway kept gymnastics in mind at home, too. She would pull
out a notebook and record whatever beam routines she made up.

At such a young age, Naleway had already developed a love
for gymnastics, and it only grew from there.

“I used to have fun looking through the Code of Points
(the artistic gymnastics rulebook), and I’d be like, ‘Wow, what routine can you
make up?'” Naleway said. “And me and my gymnast friends would be at
sleepovers, and we’d be like, ‘I’ll judge your beam routine.’ That’s what we
would do for fun.”

From there, Naleway only grew more passionate about the
sport.

Naleway’s club coach Jeanne Johnson was the head judge for
the state of Illinois during Naleway’s time at Aerial Gymnastics, where she competed in high
school. She made Johnson judge all of her uneven bars routines and
learned the Code of Points with Johnson’s help.

Naleway became so interested in judging gymnastics that she
once sat in on a judging clinic with Johnson. Most judges are older women, so
the clinic was filled with them. But sitting in the back was a young Naleway
sporting her leotard.

She eventually started judging other people’s routines
and realized she could excel at it.

Now, as a coach, Naleway finds her judging knowledge
especially helpful. She can pick out certain things in a routine and figure out
what deduction could be taken.

“Sometimes you see scores, and you’re like, ‘Where did
that come from?'” Naleway said. “Well you can’t get better if you
don’t know where it’s coming from.”

Naleway’s career as a gymnast has been over for almost a
year now, but she said she still misses it every day.

“Sometimes I’ll imagine myself doing things, and then
I’ll be like, ‘Yeah, I don’t have the muscle for that anymore,” Naleway
laughed.

She misses performing with the Illini team.

Soon enough, Naleway’s time at Illinois
will be done, but she knows “it’s time for new things.”

Next year, Naleway will be working in City Year Chicago,
an organization focused on improving education and helping students thrive.
After that, she’ll apply for graduate school to get her master’s in social
work.

But she isn’t going to step away from the sport.

Naleway plans to take the judging test in the next year or
two and start judging gymnastics, something she has wanted to do since was
little. She also hopes to coach elsewhere after leaving Illinois. And even when
she graduates, her legacy will remain even though her presence won’t.

Head coach Kim Landrus started the ‘Naleway Consistency
Award’ last season to replace the team’s “Consistent Beam Award,’ opting
to give out a general consistency award instead of focusing on one event.

Naleway had never fallen on any of her
routines throughout her Illinois gymnastics career.

It was the first time
Landrus, who’s in her fifth season as head coach, named an award after
someone.

“I had gone back for ever since stats were kept, so I
think I had gone back to 1996, and not one person had ever done it (hit all her
routines),” Landrus said. “So I’m like, ‘OK, nobody has done it in
the last decade and a half. I feel good about this.”

Naleway found out about the new award at Illinois
gymnastics’ annual pig roast last year, where the men’s and women’s teams and
their families come together for a post-season celebration. Senior Giana
O’Connor’s father told Naleway about the award, and it came as a surprise to
her but also brought her joy.

“Everybody on the team has a role, and my role was
never to be the top scorer. And so, it was really nice when I was done to kind
of have my efforts acknowledged. And going in and not falling was never
something I intended to do going into college, but that was my role: to be
consistent.

“It’s really exciting to know that when I leave here
next year, part of me and part of what I did is still with the program.”