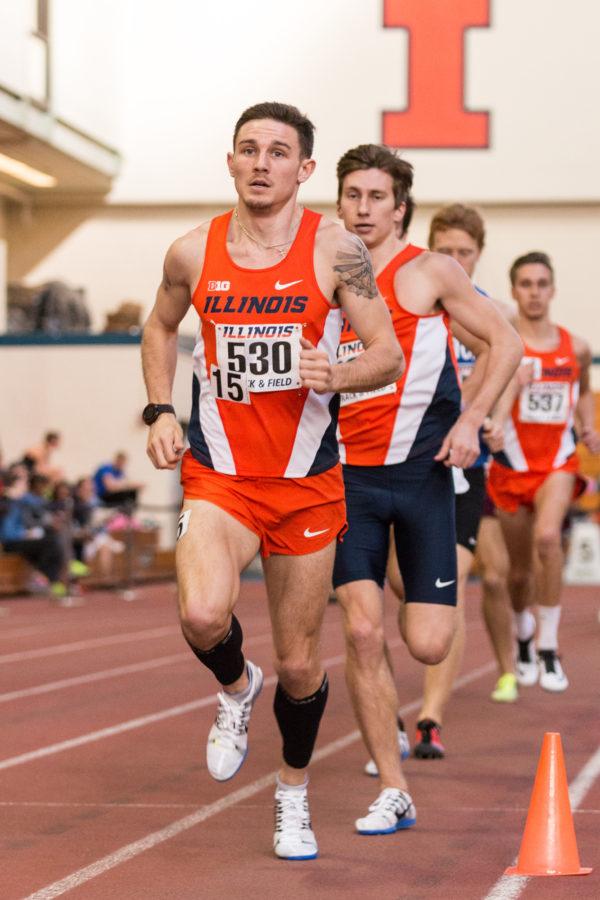 Illinois’ Dylan Lafond competes in the 3000 meter run during the Orange and Blue meet on Saturday, February 20, 2016.

Dylan Lafond and Jonathan Wells AGcapped their seasons off in Birmingham, Alabama on Friday at the NCAA Indoor Championships.

Wells walked away with the better performance of the two, placing eighth in a tightly contested high jump competitionAG. His finish earned him first team All-American honors. Lafond was not as fortunate as Wells, finishing 16th in the 5,000 meters.AG

“First team All-American is an accomplishment that isn’t just credited towards myself,” Wells said. “It’s definitely credited towards my family, my coaching staff and my teammates. I was just happy to go out there and put everything together.”

Wells had one of his better performances of the year and was a centimeter away from clearing his third jump (2.23 meters).AG If he had cleared the bar, he would have a shot at a first-place finish.AG Wells outperformed last years champion in the high jump, inching him to the podium over a tiebreaker.

Lafond, who set multiple school records throughout the season, struggled with a cold in one of his biggest races of the year, according to head coach Mike Turk.AG

“It wasn’t meant to be for Dylan this time around, but I’m proud of the way he represented us and the handled the whole situation,” Turk said. “He really acted with class and dignity. He deserved to be there.”

Despite his major success, Wells may not compete for the rest of year. He plans to work on competing in the decathlon, something that may take him a season or so to be ready for. In order to focus on it, there is a strong chance Wells will redshirt, spending the rest of the spring free of competition and focused on practice for the future seasons.

“He’s a little young and a little raw,” Turk said “He’s always been a team first guy, but right now it’s time to put his personal betterment at the forefront. I do believe he has the ability to win a national title in the heptathlon and decathlon.”

Lafond, on the other hand, will lead a distance team that seems to be one of the few bright spots on a team that struggled throughout the indoor season and is losing one of their most important competitors.