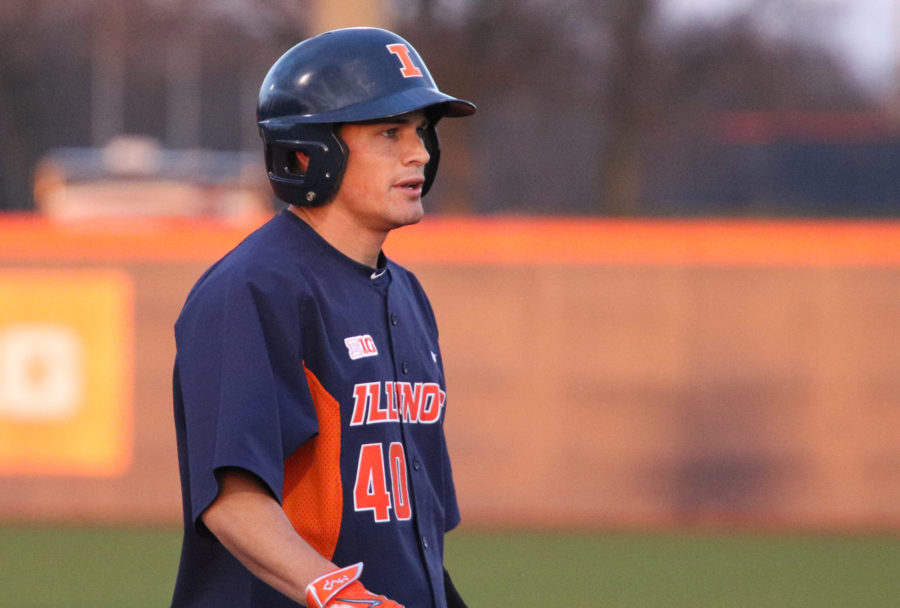 Will Krug waits on third base during the baseball game against Northwestern at Illinois Field on Friday, April 3, 2015. Krug still contributes to Illinois baseball as an assistant coach.

Tweet: Former outfielder Will Krug had a hard time staying away from @IlliniBaseball. He is back as an #Illini assistant coach

Off the diamond, he is Will, their best friend, who they share an apartment with. Mamlic and Will are both civil engineers. Hurwitz and Will “do everything together.”

But on the diamond, Will becomes assistant coach Krug.

“It is a pretty fun dynamic,” Mamlic said. “Out here he is coach Krug, but in the roommate situation we are best friends. We have been in the same classes for four years. On the field there is a different dynamic, but we still have our fun.”

Krug is set to graduate this spring with a bachelor’s degree in civil engineering and a business minor. He has one class left to finish his major — the business minor has been his main focus this semester.

The former Illini centerfielder spent his fourth and final year of eligibility with the 2015 Illini, starting in 49 games. Fourteen of his former teammates left after last season. But Krug had a hard time staying away from Illinois Field.

“I still wanted to be a part and help out the team however I could,” Krug said. “Whether it’s sharing knowledge or just associating with the team, it is such a great program and it is a lot of fun to be around.”

Krug plans to try out for the Frontier League — a independent league — on April 25, and until then, he is using Illinois’ practice facilities to stay in shape.

He spends a fair chunk of his time working with the outfielders — his area of expertise. As the student assistant coach he can share his knowledge of the position with the players while also keeping his own game in top shape.

In order to become a more versatile fielder, Krug also spends time practicing with the infielders.

He wants to get as much work in as he can, but he doesn’t want to overstay his welcome. So now, he stands in during bullpen sessions to keep his eyes adjusted to the speed instead of taking reps off pitchers.

Head coach Dan Hartleb is pleased to have the veteran on his staff. Krug started in 139 games over his four years at Illinois, but Hartleb thinks having the younger players see Krug’s intangibles is just as important.

“It’s awesome having Will here,” Hartleb said. “He was such an important part of our program for four seasons. His work ethic and the type of person he is both on and off the field is second to none. It’s good to have people that have a history with the program that want to hang around.”

Krug said his dynamic in the locker room has changed. He no longer holds the senior leader role. While there are still a lot of players from the 2015 team in the locker room, he now walks a line between the players and the coaches.

“It is definitely a different feeling,” Krug said. “I am still really good friends with a lot of guys on the team, but I am a lot more of a mentor now for the younger players. But I can get a sense of where they are at in school. As a former student-athlete, I know what they are going through.”

The on-field work is not the only thing preparing Krug for his Frontier League tryout. Watching the Illini’s games from the dugout through a coach’s perspective has taught him nuances about the game he didn’t know when he was a player.

He has not refrained from telling the other Illini coaches about how his short time coaching has improved the way he thinks about the game, either. Krug, unlike Mamlic and Hurwitz, went four years at Illinois without redshirting.

“Coaching will help me with anything I do,” Krug said. “I tell the coaches that if you could have a player experience coaching in the front end rather than the back end they will learn so much more. That is just how life is, though. You do things and then you learn after.”

After the season, Krug’s time with Illinois baseball will likely be finished. The Park Ridge, Illinois, native has a job lined up with a construction management firm in downtown Chicago for the summer. He hopes to be playing for a Frontier League team by fall.

Until then, Krug will continue being the bridge between the players and the coaches for the rest of the 2016 season. While the situation benefits Krug’s game, Mamlic sees how the arrangement might benefit him.

“I don’t think there is anything I need to get in the coaches’ heads right now,” Mamlic said. “Down the road if there’s something I want, I’ll pass it along to Will.”