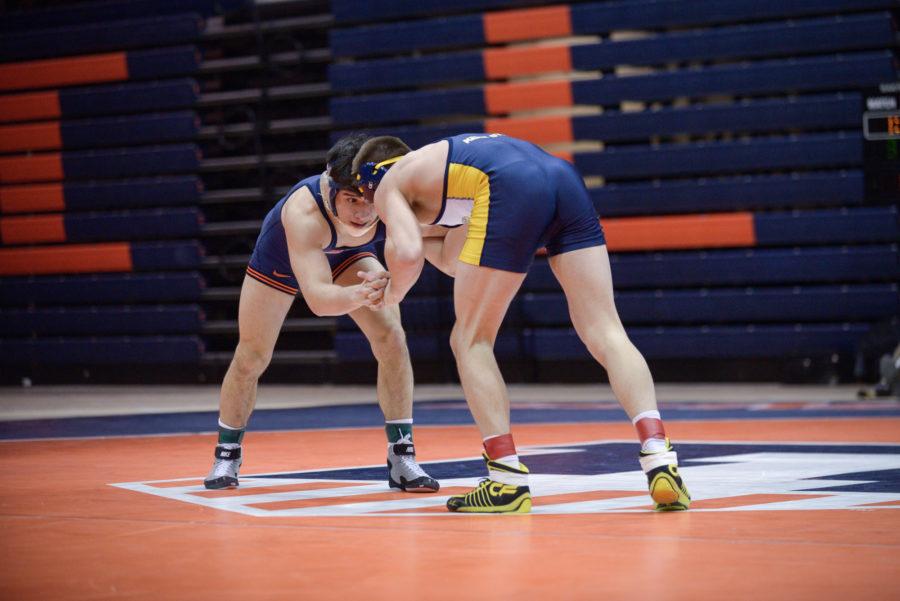 Illinois’ Isaiah Martinez looks for an opportunity against Kent State’s Ian Miller during the match at Huff Hall on Sunday, February 15, 2015.The Illini won 38-0.

Six Illini will represent the wrestling team at the NCAA Championships Thursday in New York City, with four of the six wrestlers earning seeds.

Of all the storylines going into this weekend, two that emerge are from the 133-pound and 157-pound weight classes.

Illinois’ Zane Richards is the No. 3 seed in his weight class. Cornell’s Nahshon Garrett is the No. 1 seed with a 32-0 record and was the top-ranked wrestler in his class all season.

On the lower half of the 133-pound bracket are Richards and No. 2-seeded Cory Clark, who beat Richards in the finals of the 2016 Big Ten Championships.ch

Richards opens up competition against Joey Palmer of Oregon State. Palmer enters with a 24-10 record.

Richards is 11-1 over his last 12 matches, Palmer is 9-3 record during that stretch.

A win over Palmer in the first round could force a third matchup for Richards against Maryland’s Geoff Alexander in the Sweet 16.

At 157 pounds, No. 1-ranked Isaiah Martinez begins his NCAA title defense as the top seed with a 27-1 record.

Martinez squares off against Robert Henderson of North Carolina, who is 11-12.

For Martinez, a third-straight face-off against Jason Nolf would come in the championship final on Saturday night if both grapplers go the distance.

Nolf is the No. 3 seed in the bracket, with Thomas Gnatt of North Carolina State earning the second seed.

The NCAA Championships will be a homecoming for senior Steven Rodrigues in the final tournament of his collegiate career.

All three losses for Rodrigues have come against an opponent with the last name Jordan and both are on the lower half of the bracket with Rodrigues.

Wisconsin’s Isaac Jordan (25-0) enters the tournament as the second seed in his weight class. The reigning Big Ten Champion at 165 pounds defeated Rodrigues by a 5-2 decision in the regular season.

Bo Jordan of Ohio State is the third seed at the NCAA Championships with a 16-2 record. He has beat Rodrigues twice.

Rodrigues has mentally prepared himself for what he hopes is a tough “five wars.” Five matches — “wars” — separate him from the national title.

“It’s extremely exciting,” Rodrigues said of competing in his hometown. “It’s something that, you know, I’ve dreamed about since I was little and it’s time to go get what I deserve.”

This tournament will be the final run for Jeff Koepke at 184 pounds. He will face No. 4 seed Domenic Abounader of Michigan, whom he’s faced twice this season.

Koepke (20-8) enters unseeded, but has battled Abounader well in their previous two bouts. Koepke lost by six and seven points, respectively, both by decision.