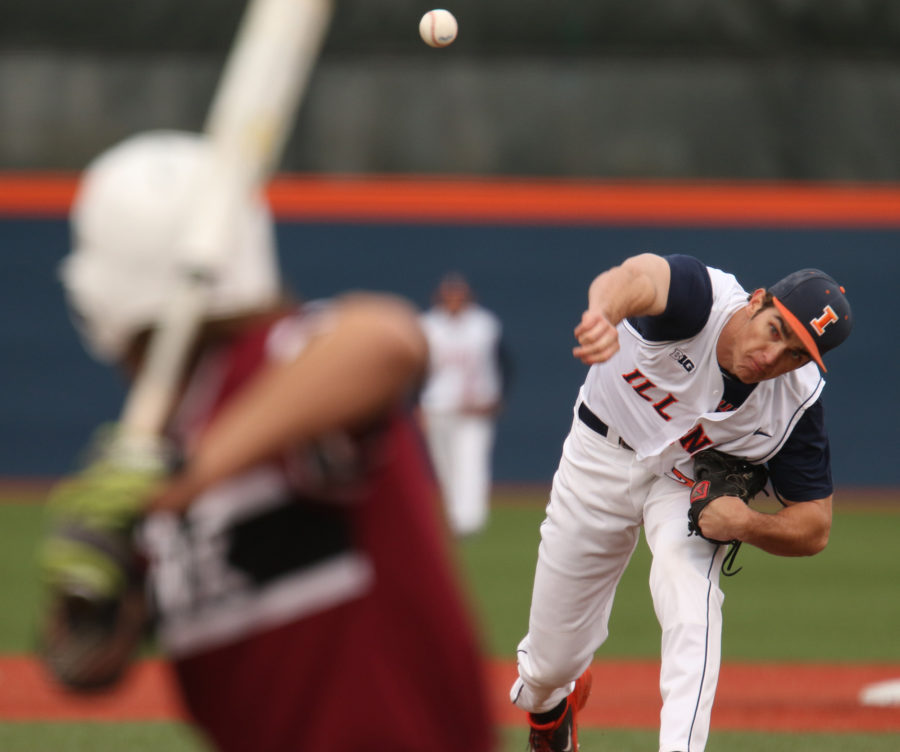 Illinois’ Cody Sedlock (29) pitches during the game against Lindenwood University at Illinois Field, on Wednesday, March 18, 2015. The Illini won 7-1.

Teeing up a fastball or occasional curveball came easy to Jalin McMillan during his high school days.ch

Things are a little different for him now, though, as he transitions into collegiate baseball with the Illini.

“You get yourself out in high school,” said McMillan, who split his high school days at De La Salle Institute and Simeon Career Academy, two South Side Chicago schools. “The pitchers make more mistakes. They think they can get you out with a 84-85 mile per hour fastball down the middle, or with a curve, so there’s not many adjustments to make.”

McMillan has had to make more adjustments early on in his freshman campaign, but has fared well. He is 3-for-9 at the plate (.333) and hit his first collegiate home run in Sunday’s 12-4 loss to Coastal Carolina during a pitch-hit appearance in the seventh inning.ch

The Chicago native knew he’d gotten ahold of a hanging curveball but was cautious as he rounded first base.

Upon his arrival to the dugout, McMillan was greeted with congratulatory hugs and back pats. His roommate, sophomore Dan Rowbottom, was one of the most excited teammates in the clubhouse. As McMillan put it, “the two really root for one another.”

Bellair gets the nod

Freshman Cole Bellair sent an excited text message to his dad before Illinois’ second game of the weekend against UNC Greensboro.

The right-handed hurler notified his father immediately after receiving word from head coach Dan Hartleb that he would be starting for the Illini.

Bellair made five appearances out of the pen prior to his first collegiate start. Despite Illinois losing 5-4 in extra innings, Bellair was satisfied with his outing.

“I feel like I gave it everything I had,” he said. “I hope I earned myself a few more starts.”

Bellair said his goal is to be a starting pitcher, although he is comfortable coming out of the pen for Illinois if that’s what Hartleb wants.

The right-hander went seven innings and struck out three batters while allowing four hits and one unearned run. Relief pitcher Nick Blackburn was credited with the loss.

Not much seemed to go right for Illinois in its last weekend series. The team gave up 13 unearned runs, lost a game in extra innings and was outscored 47-21 over the four-game span.

The struggles began in Friday’s 20-9 loss to UNC Greensboro. Ace Cody Sedlock, who came in with a 2-0 record, surrendered 12 runs, six of them earned, in five and 2/3 innings.

“He didn’t have the same location he had during the first three weekends,” Hartleb said. “He got himself in a lot of jams and left a lot of pitches in the zone. We also didn’t help him defensively.”

His next opportunity to bounce back will be this weekend when the Illini face Northern Illinois and Southern Illinois in Carbondale.