Illini hurdler leaps past injuries to have a breakout season 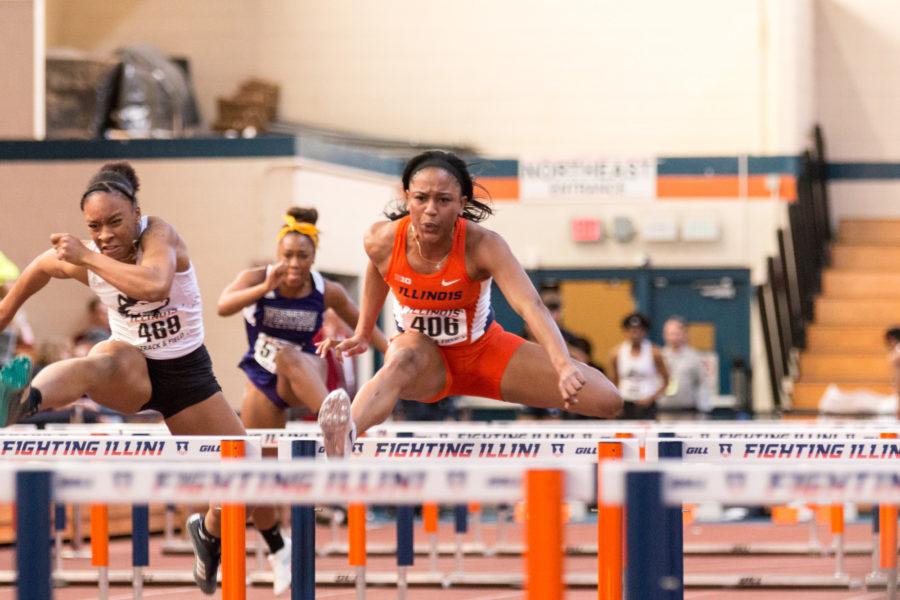 Illinois' Pedrya Seymour leaps over a hurdle during the Orange and Blue meet on Saturday, February 20, 2016. Pedrya won the 60 meter hurdles with a time of 8.27 seconds.

[email protected]’s Pedrya Seymour transitioned to the U.S. from the Bahamas and has been excellent for the #Illini since returning from injury.

After she graduates from college and finishes her track career, Illini hurdler Pedrya Seymour MG wants to become a mortician.

“When I was younger, I liked doing people’s makeup and hair,” Seymour said, “But my mom didn’t want me to be a cosmetologist.”

Her father played dominoes with a few morticians, so Seymour spent time at funeral homes, eventually deciding she wanted to do the job herself.

Seymour was born and raised in the Bahamas, where she was discovered as a runner during a competition between local churches. A coach witnessed her run the second leg of 4X400 meter relay race and contacted her mom, wanting to enroll her in a track club.

“(My mom) enrolled me in my first track club, Striders, and from there I just continued to do well.”

Seymour was eventually recruited by the Illinois track team. Her Illini career got off to a shaky start due to a recurring hip injury. She has put her problems behind her and has come into her own since recovering.

She has been on a hot streak since rejoining the Illini for the outdoor season last year, when she finished ninth in the Big Ten in the 400-meter hurdles with a personal best time of 1 minute, 1.66 seconds.MG

She kept her momentum going into the indoor season this winter, where she set a personal best in the 60-meter hurdles at the Iowa State Classic, only to top that time at the Big Ten Championships. Seymour’s time of 8.16 seconds earned her third in the conference and a trip to the NCAA championships. MG

The key to Seymour’s successful recovery: lots of rest.

“My trainers were instrumental in helping me get better,” she said. “But the biggest thing for me was rest. I needed to make sure I was getting sufficient rest.”

Seymour went on to finish 13th in the nation in the 60-meter hurdles last weekend.MG
She said that she was proud to represent her parents and her family but also to represent what the team calls “The Hurdle Gang.” Seymour now holds seventh place all-time on a decorated list of Illini hurdlers.MG

While the indoor season is over for the Illini, Seymour will have one more chance to compete indoors, only this time she will be representing not only her university and her family, but her whole country. She will compete on the Bahamian national team at the IAAF World Indoor Championships this weekend.

Seymour was initially hesitant to join the national team when the Bahamian Association of Athletics Associations called to notify her of her selection.

“When I got invited, at first I hesitated,” she said. “I thought, ‘am I ready to compete on the national stage, with professionals?’ But I talked to (Illini) coach (Randy) Gillon and my mother, and they both told me to go for it.”

Seymour will be running the 60-meter hurdles for the Bahamian women this weekend in Portland, Oregon.MG After that, she will return to Champaign-Urbana and join up with Illinois again for the outdoor season.

Seymour credits a lot of her success to her parents. Her mother originally pushed her into the world of track by signing her up for her first track club, and they have been there helping Seymour through every part of her career since. Today, they remain her “spiritual advisers.”

“They are kind of like coaches but more like my spiritual advisers,” she said. “They don’t know too much about track, but they always help me as best they can.”

Seymour hopes that the hurdlers have a strong outdoor season. She says that they are a tight-knit group, and her teammates are some of her closest friends.

She is also happy to be finished with her second Illinois winter, which are quite the opposite of Bahamian winters. Her word of choice to describe the winter weather?