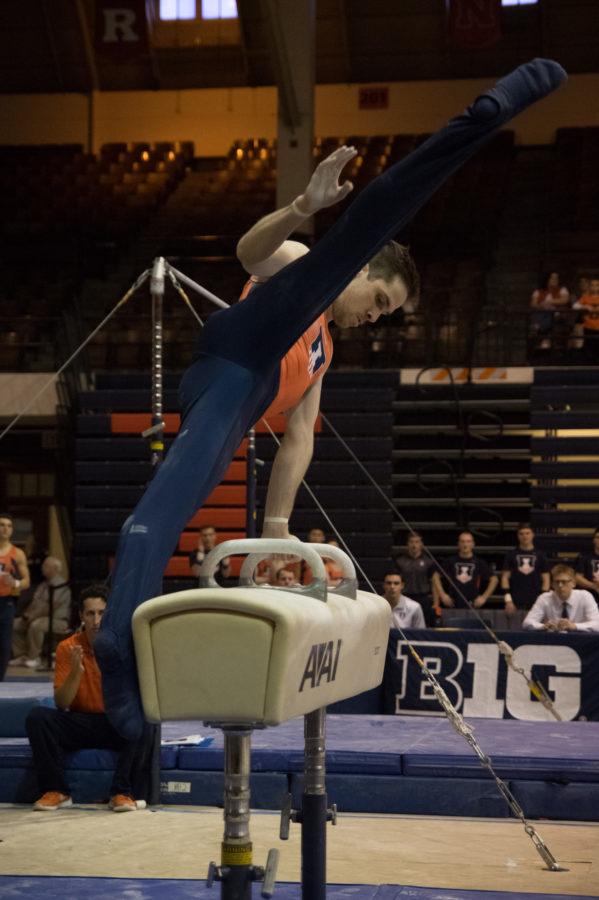 Illinois' Logan Bradley performs his routine on the pommel horse at the meet against Michigan on March 12, 2016.

When classes end this Friday, the University of Illinois will officially be on spring break. But before members of the men’s gymnastics team can join their peers on vacation, they must first square off against the No. 1 team in the country.

Oklahoma has finished in the top two at the NCAA National Championships in each of the past five seasons, and after being the runner-up for four consecutive years, the Sooners finally earned the NCAA crown last year.

Looking to continue their undefeated season, the reigning NCAA champs will enter Huff Hall this Saturday, fresh off of a first place finish against Ohio State and Air Force in a three-way meet. The Sooners are averaging 449.05 points per competition, higher than Illinois’ season-high and school record of 442.300.

“(Oklahoma) is going to have great energy. They’re going to be hitting routines, they’re going to be doing what they’ve done all year long,” head coach Justin Spring said. “We need to be able to fire back within those momentum swings and be doing our job.”

An upset of the Sooners would solidify the Illini as one of the best teams in the country, but for some gymnasts on Spring’s squad, it could mean a lot more. Saturday marks the final home competition of the 2015-16 season and for three Illini seniors, an underdog victory would be a sweet end to their collegiate careers.

Spring reflected back on his time as a student-athlete at Illinois and said that he expects Saturday’s Senior night will mean a little bit extra to his seniors. As much as Spring wants to approach it as “just another meet,” he wants to acknowledge this moment for the men he’s coached over the last four years.

Spring expects they’ll give it all they have one last time.

“My brother was on the team. He graduated back in 2009, so I remember coming to Huff Hall, watching meets when I was 10 or 11 years old,” senior Logan Bradley said. “It’s sad, like I never actually thought I would be sad. But at the same time, it’s exciting to move on to the next part of my life.”

In its last competition before the Big Ten Championships, Illinois will look to bounce back from a sloppy victory over Michigan, in which the team had 10 falls. Not feeling 100 percent when his team faced its Big Ten foe, sophomore standout Bobby Baker was responsible for three of those falls.

“The routines were great. He’s got dismount issues. We’ve got to fix his dismount,” Spring said. “So we’re going to hit tons of numbers of those (in practice), and make sure he walks into next weekend … feeling comfortable finishing a set start to finish.”

In his quest for redemption, Baker will be joined by sophomore Brandon Ngai, who also had a rough meet against the Wolverines. The 17-year-old recorded his lowest pommel horse score of the season after falling off of the apparatus in the middle of his routine.

Neither Spring nor associate head coach Daniel Ribeiro are concerned about how the sophomore will respond. Ribeiro equated Ngai’s mistake to “missing a three-point shot,” and Spring simply said that Ngai’s mistake was due to him being human.

Both expect the event specialist to return to his national title-contending form this Saturday.