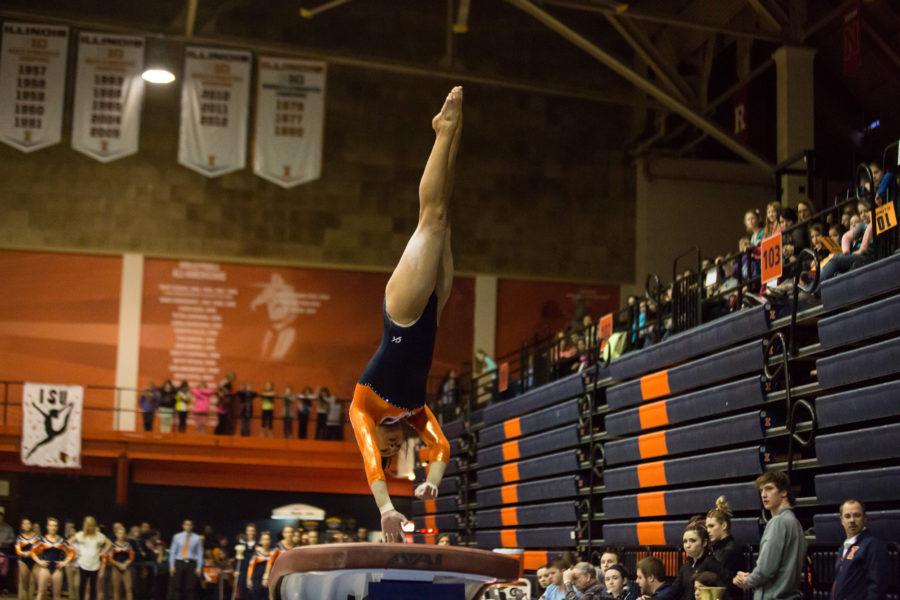 Last weekend, Illinois went up against Nebraska, Michigan
State, Maryland and Ohio State at the Big Five Meet. The Illini were in
the running to place in the top three at the meet, until senior
Giana O’Connor sustained an injury on floor.

O’Connor’s injury on the last run of her floor routine forced
the team to make some last minute changes in the lineup, which slowed
down the team’s momentum and led to a fourth place (195.950) finish.

With a finish outside the top three, the Illini placed in
the first session of the Big Ten Championships this weekend in Lincoln,
Nebraska.

The morning session of the championships will put No. 25
Illinois up against No. 18 Iowa, Maryland and Rutgers. The Illini have
seen each of these programs in competition this year, losing only to
Iowa, at the beginning of February.

For the Illini to make a run for the championship title, they
will need to shine above the teams in their session and have the best
performance of their season.

A major factor of the meet will be whether or not the team can
properly account for O’Connor being out of competition. O’Connor’s
absence leaves an open spot in each of the four events for head coach
Kim Landrus to fill.

“We have people to fill those roles,” Landrus said. “It will be a total team effort for people to step up.”

Last meet, Landrus put in freshman Julia Hutcherson on vault
and sophomore Bridget Hodan on the uneven bars and plans to stick to
those choices this weekend. As for the remaining events, Landrus has
freshman Brielle Nguyen and senior Heather Foley in mind as possible
substitutions to compete in beam and floor this Saturday.

Even with the event spots filled, the team will be without one
of the major team leaders in competition. O’Connor ranks No. 24
nationally in the all-around, No. 6 in the Big Ten, and leads the team
with 21 individual event titles this season.

“I think (O’Connor’s injury) is difficult for us because these
last competitions are the most important and she was a big part of the
team,” freshman Lizzy LeDuc said. “But it’s nice to have her cheering
for us on the sidelines.”

The team’s performance this weekend will also depend on whether
the gymnasts can put together a successful bars rotation. In the past three meets combined, the Illini have averaged 48.442 on bars. The
team has been struggling to hit six routines in the event, leading to
lower scores and a lack of confidence in the rotation.

“I think one of the biggest things is bars; the confidence
isn’t there,” LeDuc said. “I feel like if we just get that (confidence)
up, it’ll help the team.”

On other events, the Illini have been performing consistently
well. Senior Sunny Kato, who leads the Big Ten on beam and nationally
ranks No. 4, has led the beam rotation through five straight meets of
event totals 49.150 or higher. The Illini have also been producing
points on floor and vault, setting season-high totals in each of the
events in recent meets.

If the gymnasts can manage to come together on bars and if they
keep the consistent performances on beam, floor and vault, they will be
a competitor against teams in the second session of the championships.

“I want to see them go out and be confident, making sure that
they put everything in it,” Landrus said. “I want them to have fun and
really go back to their training and the ‘why’ and everything that we’ve
worked on all year.”