Vecvanags gets pair of wins in Illinois softball's home-opening doubleheader 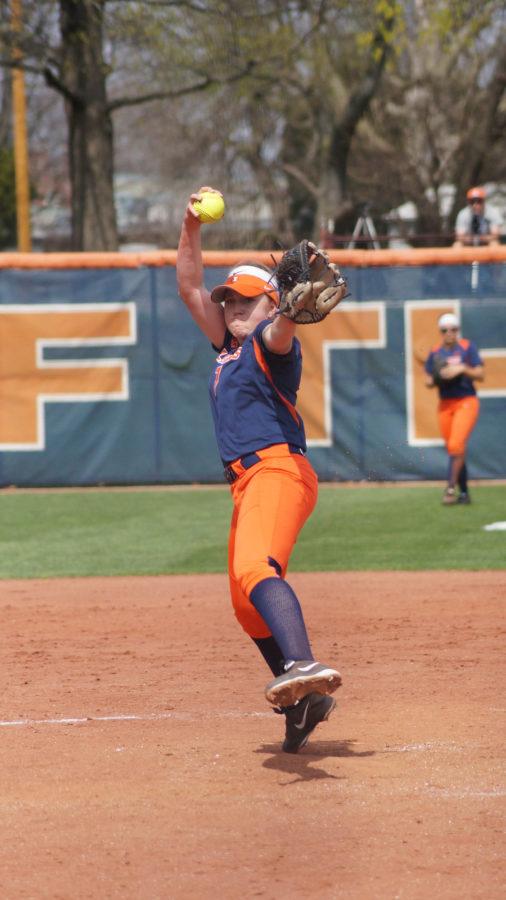 Jade Vecvanags got wins in both ends of Illinois softball’s Tuesday doubleheader with IUPUI, and they came under very different circumstances.

The junior combined with sophomore Kate Giddens to no-hit the Jaguars and the pair came one error away from a perfect game.

In game two, Vecvanags replaced starter Breanna Wonderly with two outs in the eighth and retired the one batter she faced. The Illini walked off with two runs in the bottom of the eighth to give Vecvanags the win.

She threw a three-hitter against DePaul last season, but had never been part of a no-hitter with Illinois before.

The Jaguars’ bats woke up in game two, but some late heroics gave the Illini the back end of their home opening doubleheader.

Down 3-2 with half an inning to play, the Illini took the game into extra innings after a fielding error brought sophomore Sam Acosta home, tying the score 3-3.

Illinois once again came down to its last three outs, down 4-3 going into the bottom of the eighth inning. Junior outfielder Nicole Evans doubled down the line to bring in the tying run and with the game on the line, shortstop Ruby Rivera hit a sacrifice fly to right to end the game.

The two victories give Illinois a 5-0 advantage in the all-time series versus IUPUI — the teams last played in 2014.

Both victories add to an already strong month for the Illini.

The team grabbed its 500th all-time victory with 11-0 victory versus East Carolina in the Under Armour Invitational. This is the program’s 17th season.

The offense has been clicking for Illinois as well — the team is second in the conference in batting average, and third in slugging percentage. Three of the team’s victories from last week were mercy rule victories.

ccThe Illini’s return home is short-lived. They return to the road for the San Diego Classic on Friday.