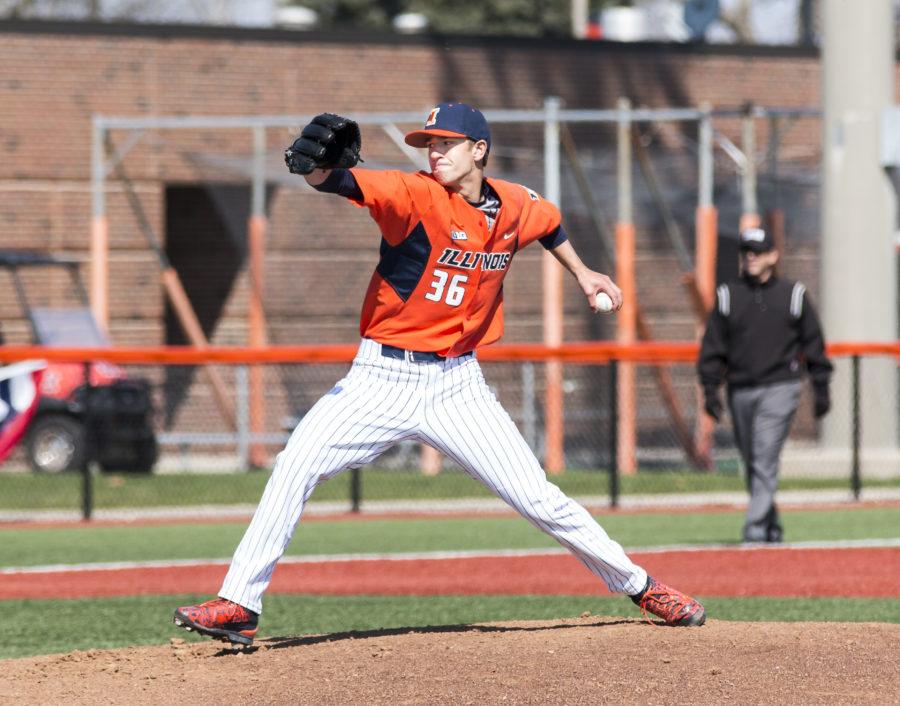 Illinois starting pitcher Doug Hayes delivers a pitch during game one of the team’s doubleheader against Penn State on Saturday, March 26. Hayes threw the first Illini one-hitter since 2007.

Illinois baseball (10-10, 2-0 Big Ten) took advantage of multiple Penn State (9-12, 0-2) miscues Saturday behind a dominating pitching performance by Doug Hayes in game one of a doubleheader that took just under two hours to complete.

Hayes earned the win in the 6-1 victory at Illinois Field. The southpaw retired the first nine batters he faced, eight of which came via a ground ball – he induced 18 ground balls total, and gave up only one hit and one walk in the first complete game of his career. It was the first one-hitter tossed by an Illini hurler since 2007 when Mike Stankiewicz accomplished the same feat against Northwestern.

“My focus was to try and get use back in the dugout quickly,” Hayes said. “I was looking to go at every batter early, and they were swinging early so that helped me out.

“The one hitter unfortunately ended up scoring, so that was too bad,” he continued. “But I’m just glad to get the win.”

How they scored: Right fielder Jack Yalowitz walked to start the third inning for Illinois. He swiped second and advanced to third on a throwing error by catcher Nick Graham, and later scored with two outs when shortstop Adam Walton reached on an error from third baseman Jim Haley.

Catcher Jason Goldstein kept the train rolling in the fourth with a leadoff home run to left. Afterward, first baseman Pat McInerney reached on an error by Nick Riotto, who bobbled and dropped the ball in short right field. Doran Turchin followed up with a double, and designated hitter Anthony Drago drove them in with the second homer of the inning.

All of Illinois’ runs up to that point came off Penn State starter Sal Biasi. Second baseman Michael Hurwitz drove in one more run in the eighth inning off reliever Jared Fagnano.

The Nittany Lions scored their lone run in the fourth. Haley hit a leadoff triple and was driven in following a fielder’s choice.

What it means: Illinois received back-to-back strong starts from Cody Sedlock and Hayes. The team is one win away from sweeping the Nittany Lions for a fourth straight season. If the Illini complete the sweep, they will match their longest winning streak of the year – three – and go one game over .500.

Up next: Illinois and Penn State will play game two of their doubleheader at 3 p.m. Cole Bellair will take the hill for the Illini. The freshman has yet to earn a decision this season. He’s surrendered only one earned run over his previous two starts. His counterpart, Justin Hagenman, is 3-1 with a 1.12 ERA. He is the first U.S. born pitcher to earn a win over a Cuban National Series team. The hurler picked up that win while pitching for Penn State at the Cuba Baseball Friendship Tournament in November.