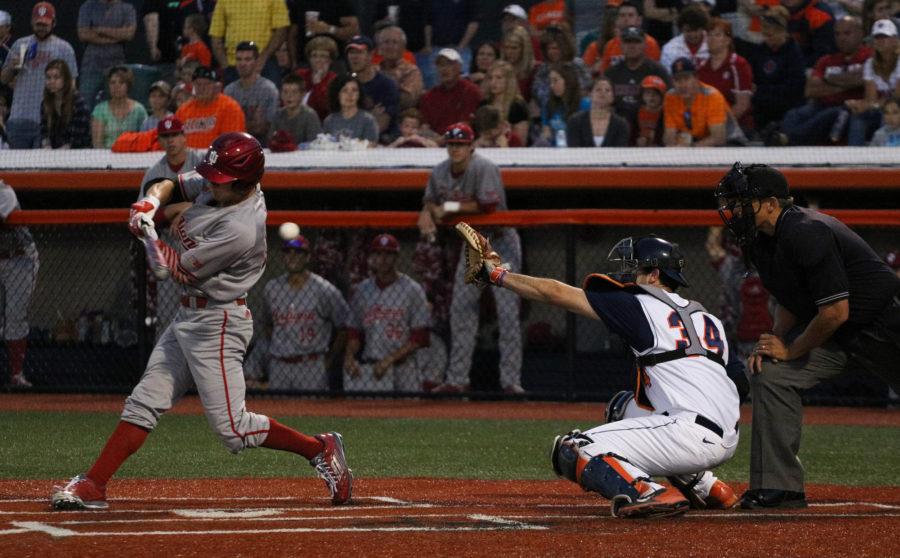 Illinois’ Jason Goldstein (34) reaches out to catch the pitch during the baseball game v. Indiana at Illinois Field on Friday, Apr. 17, 2015. Illinois won 5-1.

After taking the first two games in its weekend series against Penn State, Illinois (10-11, 2-1 Big Ten) AGdropped the third after surrendering four runs in the ninth inning.AG

“It’s disappointing, it really is,” Goldstein said. “Nothing against Penn State, but they’re not one of the top teams in the Big Ten. It might be one of our easier series all year in conference play. Granted we play a lot of the top teams all year, so it would’ve been really nice to come out of here with the sweep.”

Dissimilar to last season’s historic run, the Illini have lost multiple games late in the opening third of their schedule. Their 11 loses is more than the team had last season (10)AG. Tyler Jay, first round draft pick of the Minnesota Twins in the 2015 MLB Draft,AG is no longer the team’s stopper, but the tandem of J.D. Nielsen and Nick Blackburn were projected to be a solid pairing in the back end of the bullpen. Nielsen went 3-1 with a 2.92 ERA and picked up two saves in 24 appearances last season.AG Blackburn, who was drafted by the New York Mets in the 22nd round last year but opted to stay at Illinois for his senior season,AG is on this year’s National Collegiate Baseball Writers Association (NCBWA) Stopper of the Year watch list.AG

The starting trio of Cody Sedlock, Doug Hayes and Cole Bellair did provide promise on the bump this weekend. AGThe hurlers combined for 24 innings and 18 strikeouts while allowing 11 hits and two runs. Sedlock (4-1) AGand Hayes (3-2) Agearned wins in their outings, Bellair (0-0)Ag has yet to receive a decision this year despite his 0.65 ERA in 27.2 innings pitched.AG

“They were outstanding all weekend,” Goldstein said of the starters. “There was only one walk from them all weekend, and that’s what we ask of them. We want them to go out and attack the zone and let our defense go to work.”

For most of the weekend, Illinois’ defense was nearly flawless. But letdowns in the ninth inning of Saturday’s loss led to a debacle.

Penn State (10-12, 1-2) third baseman Jim Haley led off the ninth with an infield single AGoff of reliever Andrew Mamlic.AG The next batter, Greg Guers, who was attempting to bunt, walked,AG and Tyler Kendall followed up with an infield single. Third baseman Trent Hammond was playing too far back to retrieve the ball and throw out Kendall in time.

J.D. Nielsen came in following a fielder’s choice to replace Mamilc.AG The side-armer hit the first batter he saw, then allowed a bases-clearing double from pinch-hitter Willie BurgerAG – all the runs but one were credited to Mamlic. It was Burger’s only plate appearance of the series. The reigning Big Ten Player and Freshman of the Week was a late scratch in Friday’s contest.

Illinois takes on the Indiana State on Tuesday in Terre Haute, Indiana. AGThe Sycamores are 14-11 and come in riding a four-game losing streak.AG