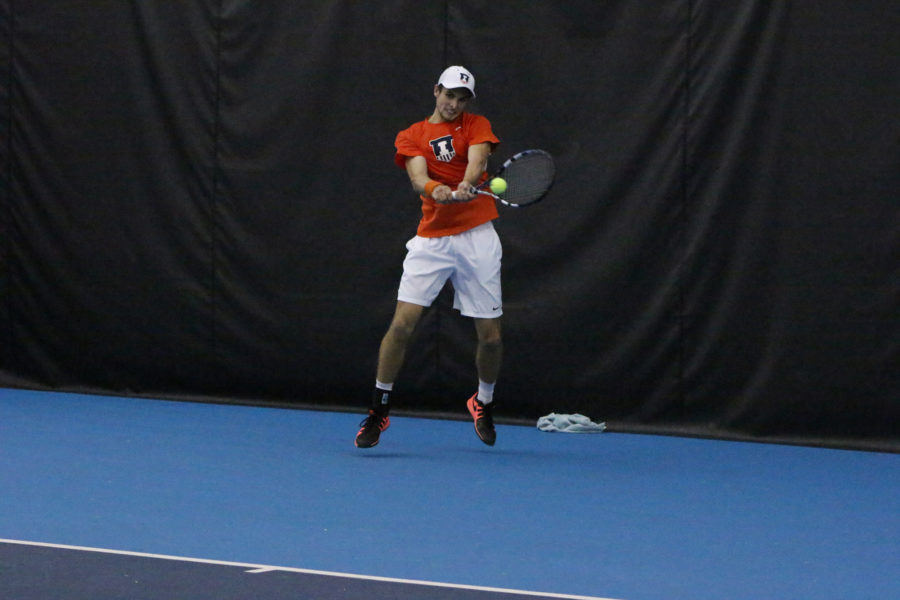 Illinois’ Aleks Vukic returns the ball in the match against TCU at the Atkins Tennis Center on Sunday, Feb. 28, 2016

On Sunday afternoon fans gathered outside the Atkins Tennis Center in Urbana, Illinois, to watch the 10th-ranked Illinois men’s tennis team take on No. 54 Purdue in the first Big Ten home match of the season.EJ

The meet started with doubles play and all eyes were centered on the matchup between Illinois’ top pair of Aron Hiltzik and Aleks Vukic competed against Dominik Scochurek and Ricky Medinilla. EJ

The two Illini sophomores went point-for-point with the Boilermaker duo and the match was decided by a tiebreaker.EJ

With the score even at six during the tiebreaker, Hiltzik returned a serve that Purdue could not control, giving Hiltzik and Vukic the win and one point to begin the afternoon.

“We started off a little bit shaky,” Vukic said. “It’s tough conditions. We were playing indoors and coming outside and playing in windy conditions took us a little while to adjust to.”

Fans and teammates rallied behind the duo late in the match and into the tiebreaker – Vukic credited their support for helping the Illini get the win.

Illinois head coach Brad Dancer said that Hiltzik and Vukic did a great job of competing even though it wasn’t what he may have wanted out of them.EJ

“They didn’t play as smart as I’d like to see them,” Dancer said. “They made some critical mistakes and we got to get better at doubles, so that we can win big matches against teams and so forth. We’re not quite there yet.”

The win set the tone for the rest of the match and Illinois never looked back.

In singles, the No. 59 Hiltzik made quick work of Medinilla, winning 6-3 in both sets.EJ

The match marked Illinois’ second victory in three days, as it also picked up a 4-0 win on Friday at Indiana.EJ

“Anytime we win a conference match and the fact that we were able to sweep the conference match is great because Purdue has a lot of talent on their team,” Dancer said. “We have a lot of respect for their players and their lineup and so, I think we feel great about that and other than that, we just need to keep moving forward and progressing with what we’re trying to do with this team.”

Following their loss today, Purdue is 11-3 in their last 14 games.EJ Three of those 11 wins came against teams ranked in the top 75.EJ

Hiltzik said that the wind played a big role in his doubles match and made playing a lot trickier than usual.

“Warming up this morning, it was nice and warm and no wind at all,” Hiltzik said. “Then, we came back out for the match and it was a little windy, so I think that it will take a little better preparation in the future.”