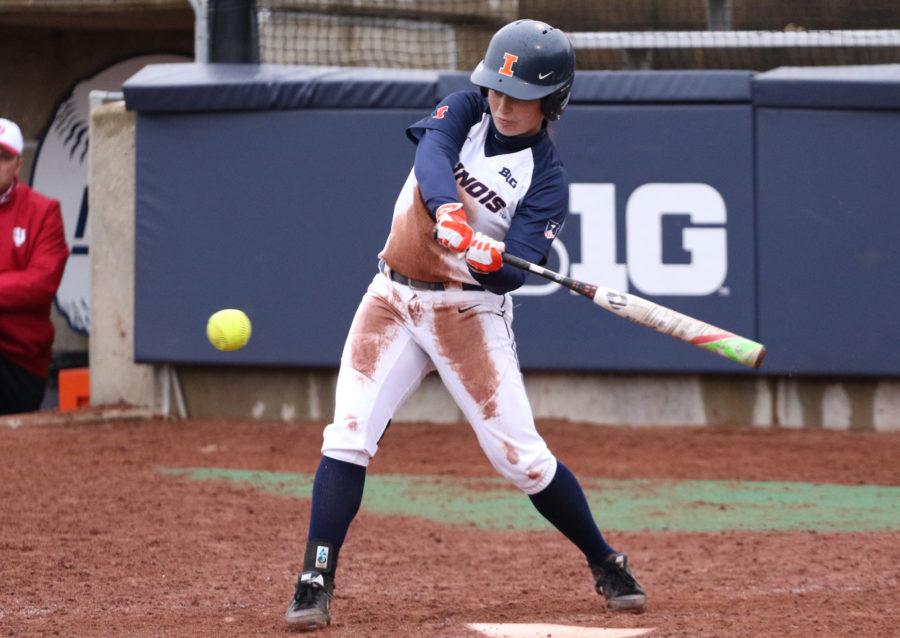 While Illinois students left campus for home and various vacation destinations, the Illinois softball team played 10 games over the break.JT

Illinois faced off against mid-major teams from across western conferences, finishing with a 4-1 record on the weekend.JT

The Illini opened the classic with a doubleheader against Long Beach State and Weber State, and Illinois squeezed out wins in each, 5-4 and 7-5, respectively.JT

Junior Alyssa Gunther went 4-for-6 on the first day, notching her second home run of the year to go along with five RBIs.JT

Day two of the Classic featured the Illini’s lone loss in San Diego. Following a 9-3 win over Saint Mary’s College in game one of the day, Illinois dropped the nightcap to San Jose State, 7-6.JT

The Illini were down 7-1 entering the final inning against the SpartansJT, but a Nicole Evans grand slam brought Illinois within striking distance. With two outs and the bases loaded, a line-out caused the comeback to fall short, and the Illini dropped their only game of the Classic.

Illinois then closed out its time in San Diego with a 9-1 win over Seattle in the finale.JT

Before returning home, the Illini traveled to Cal State Northridge for a doubleheader against the Matadors. Illinois split the two-game set, dropping the first game 4-3, before winning the second by the same score in extra innings.JT

Redshirt freshman Emily Brodner played the hero in game two, lifting a two-run home run in the tenth to seal the win for IllinoisJT along with junior pitcher Breanna Wonderly who struck out a career-high 10 batters in the victory.JT

The Illini also opened their Big Ten portion of the schedule this past weekend with a home series against the Nebraska Cornhuskers.

Illinois kicked off the three-game set on a disappointing note, dropping the first game 10-2. The Huskers hung eight runs on junior pitcher Jade Vecvanags in the second inning, which was highlighted by a two-run double and a three-run home run to finish out the frame.JT

Despite the rough opening game, Illinois rebounded the following day in a double-header against the Big Ten foe. Wonderly commanded the pitcher’s circle for all 13 innings of the day, giving up five runs between the two games.

The Illini took game one, 8-3, but it took until the team’s final at-bat to find the majority of the offense. In a back-and-forth game through the first five frames, Illinois came to bat in the bottom of the sixth and proceeded to break the game wide open. Evans blasted her second grand slam in a week to give the Illini the lead.JT Sophomore Annie Fleming added an RBI triple to finish the scoring and give Illinois its first conference win of the season.JT

In game two, the Illini continued the theme of late scoring they showed in game one. The Huskers jumped out to an early 2-0 lead, but Illinois came to life with four runs in the fourth inning behind a two-run home run from junior Ruby Rivera. Two more runs followed in the fifth with back-to-back solo shots from senior Allie Bauch and Evans to stretch it to 6-2.

Illinois capped off the short game in the bottom of the sixth. Doubles from Bauch and Evans combined with a triple from sophomore Carly Thomas helped the Illini finish out the double-header sweep, 10-2.JT

The Illini finished spring break with a 7-3 record, bringing the team’s overall record to 20-10 on the season.JT