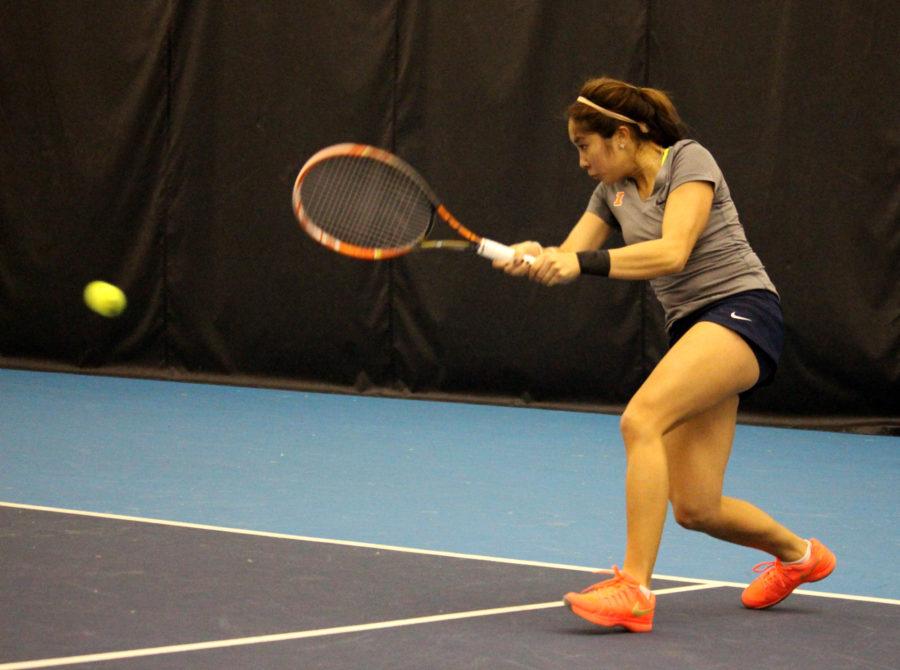 Louise Kwong does a two handed rally at the Atkins Tennis Center on Febrary 26, 2016 against Northwestern. Illini lost 3-4.

The Illinois women’s tennis team completed its undefeated spring break with a 5-2 victory over Maryland on Sunday morning.AG

Earlier in the week, the Illini defeated the College of Charleston and Rutgers. The team is now on its first three-game winning streak since late January.AG

Illinois picked up two victories in doubles and got its other three in singles.JT

For doubles, the top pair of No. 46 Louise Kwong and Ines Vias won 6-1. The second pair of Jerricka Boone and Madie Baillon also won steadily, beating the Terrapins 6-2. Illinois’ third pair, Alexis Casati and Daniela Pedraza were unable to finish their match but were tied 4-4 at the time it was called.JT

Kwong and Vias have 17 wins this year and are undefeated in Big Ten play.JT

Following their victories, the Illini are now 27-8 on the season in doubles competition.JT

In singles, the Illini picked up wins from their top-two players.

Aside from the three-set win from Casati, all of the Illini wins took only two sets.JT

The team is now 8-6 overall and 2-1 against Big Ten opponents.JT

Head coach Evan Clark said in that he was happy with the team’s play on Sunday and that he was glad to see them rebound from its weak effort on Friday.

“Overall, I am very proud of the team going 3-0 over this very long week on the road,” Clark said in a statement from FightingIllini.com. “We are excited to get back home to Champaign for a couple weeks.”

The Illini will be back in action at home on April 1 when they take on the Iowa Hawkeyes for a Big Ten showdown.JT