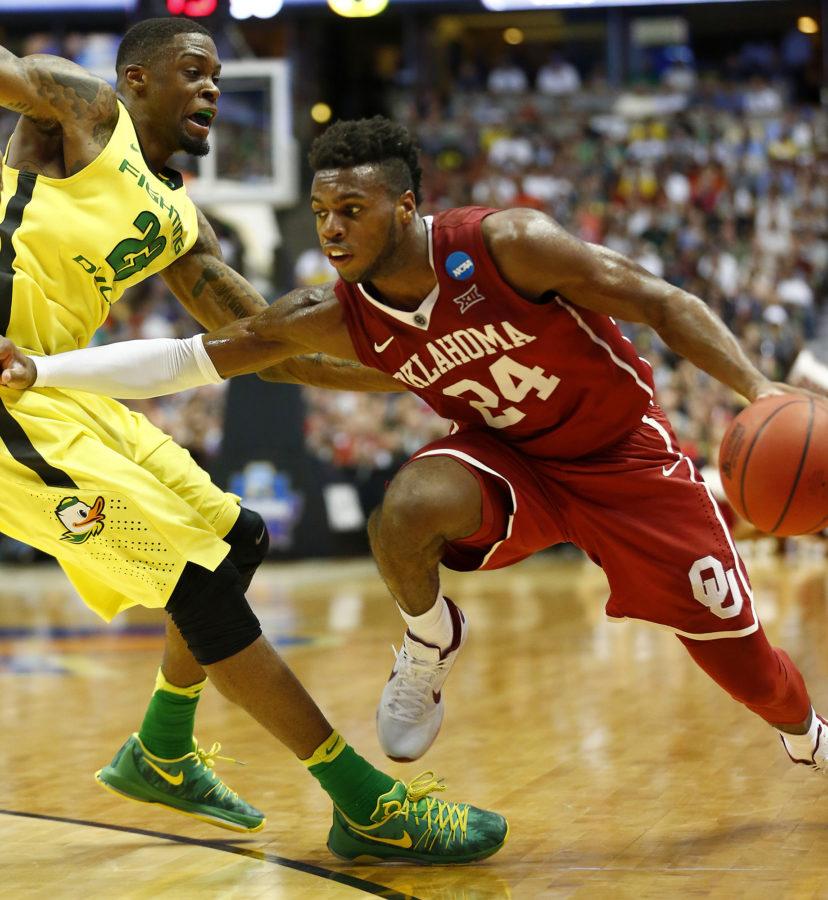 Oklahoma's Buddy Hield, right, drives to the basket against Oregon's Elgin Cook during the first half in the finals of the NCAA Tournament's West region at the Honda Center in Anaheim, Calif., on Saturday, March 26, 2016. Oklahoma advanced, 80-68. (Luis Sinco/Los Angeles Times/TNS)

Tweet: .Who should you root for in the Final Four? Check out @danescalona77’s column to find out.

Yet another wild, unpredictable NCAA tournament has produced a Final Four that very few people can claim they predicted. Now, if you are a neutral observer with no strong interest in any of the remaining contenders, you’re probably wondering who you should root for.

With each of the four teams bringing fascinating subplots with them to Houston, here is the rundown of the teams you should root for in the Final Four.

North Carolina: The Tar Heels have steamrolled to their 19th Final Four appearance by winning all four tournament games so far by at least 14 points. Outside of a few minutes against Notre Dame, North Carolina has not been challenged much at all. It does not help opposing players that North Carolina is significantly more physically imposing than almost every other team in the nation.

The Tar Heels do not rely on a single star, but rather a revolving door of talented athletes who can take over a game when called upon. How you defend versatile players like Marcus Paige, Justin Jackson, Brice Johnson and Joel Berry is a strategy I’m glad not to be tasked with devising.

North Carolina is the deepest and most balanced team left in the tournament, making them the likely favorite to win a sixth national championship.

If you are a fan who admires watching the greatness of a storied college basketball brand name in action, then by all means root for the Tar Heels.

Oklahoma: Comparing a college standout to an established NBA superstar should be done with caution. However, how can you not compare Buddy Hield to one Steph Curry? Hield has had the best scoring tournament since Curry’s exploits propelled him to stardom in 2008, and it does not help that both players boast an eerily similar style of play.

If watching star players is your thing, the Sooners are your team. Hield has willed his team to the national semifinals, averaging 29 points per game while shooting 56 percent and 47 percent beyond the arc. The Sooners are not solely reliant on Hield, which makes them so much tougher. Of course, if Hield erupts for 30 points, they are nearly unbeatable.

Villanova’s only chance to sneak past Oklahoma is to deny Hield the ball off screens and to stalk him whenever he is on the floor. The Wildcats must be physical with him on every opportunity they get. Hield is such a mesmerizing ball-handler, though he can easily create his own space to nail demoralizing step-back jumpers as he did to Oregon.

Villanova: The Wildcats may be a No. 2 seed, but they emit an aura of a gritty, defensive-minded, team-oriented underdog without a definitive superstar. Its lack of a star player makes up for a championship combination of team defense, crisp ball movement and a killer instinct at the end of games.

Villanova played a nearly perfect defensive game by continually frustrating Kansas. The Wildcats forced the Jayhawks into 16 turnovers and only 27 percent shooting from the three-point range. Most impressive of all, the Wildcats limited Jayhawks star Perry Ellis to just five field goal attempts and six points.

Plus, is it possible not to enjoy watching senior captain Ryan Arcidiacono commandeer his team? His high basketball IQ and ability to affect games in the smallest of ways has developed him into one of the stars in this year’s tournament. The timely turnover he forced in the final seconds against Kansas was just one example of what makes him and his team so compelling.

If you are a fan of teams that lack the star power and talent that other teams may have, but compensate for it with a grind-it-out attitude, you just have to pull for Villanova.

Syracuse: Syracuse in 2016 is a spitting image of UConn in 2014. Both squads were sources of Selection Sunday controversy prior to making an unprecedented run toward a national championship.

The Orange are repeating the usual NCAA storyline of the lucky team that narrowly receives a tournament bid only to find a groove once they get in. It was definitely surprising to see Syracuse dominate the opening weekend, not to mention seeing them make a late comeback against Gonzaga.

Then it was downright shocking to witness the magic of Syracuse’s jaw-dropping comeback against a defensive stalwart in Virginia. At the 9:33 mark in the second half, the Cavaliers led by 15. At the 5:51 mark, the Orange were up by one. In the final nine and a half minutes, Syracuse only allowed four points.

Chalk another one up to the genius of head coach Jim Boeheim and the puzzling mystery of the 2-3 zone.

It’s difficult not to root for teams that make a championship run out of nowhere, even if that team is a traditional basketball powerhouse. If you dig ugly yet effective basketball, Syracuse should strike your fancy.

National Championship Game Prediction: The masterful shooting of Buddy Hield and the balanced offensive barrage of North Carolina will be too much for Villanova and Syracuse to handle. The championship matchup will create a heavyweight bout between two high-octane offenses and two highly-respected coaches in Oklahoma’s Lon Kruger and North Carolina’s Roy Williams.

Champion: The size, versatility, athleticism and balance of the Tar Heels leads Williams to his third national championship.

Dan is a senior in Media.