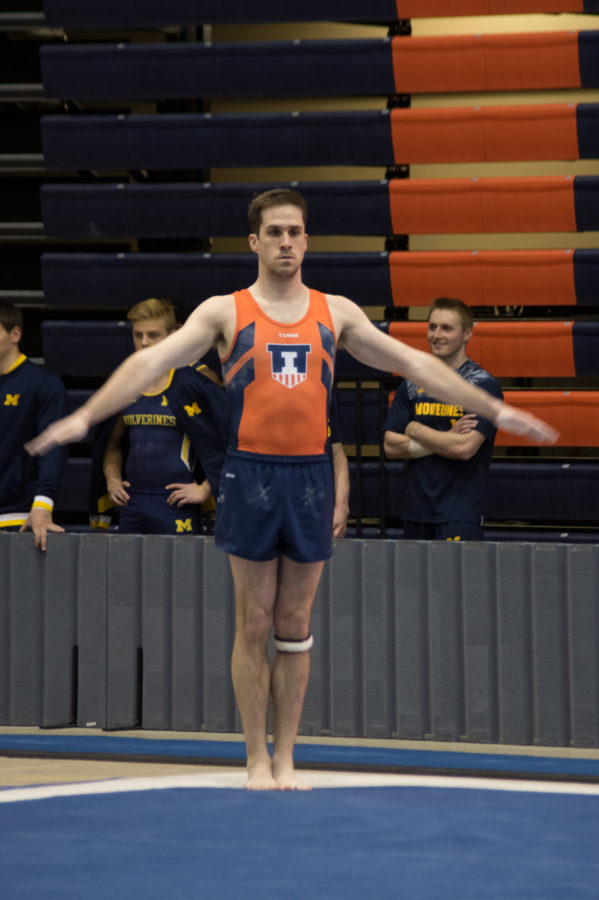 Illinois’ Logan Bradley pauses in his routine at the meet against Michigan on March 12, 2016.

Sophomore Brandon Ngai’s rise to
pommel horse prominence has been one of the most talked about stories
of the Illinois men’s gymnastics team this season.

Aside from his one missed routine
at home against Michigan, the 17-year-old has won or tied for the event title at
every competition this year, including a career-high 15.600 against the undefeated and No. 1 Oklahoma – bringing his career crown total to
sevenmp.

Illinois head coach Justin Spring
says that Ngai’s recruitment which was complicated by his age was unlike any other coaching experience he has
ever had and is one he surely won’t forget.

“After the first email, I believe
my response was, ‘Are you 14 or are you a junior in high school?’” Spring said.
“And (his response) was ‘Yes.’”

Spring says the event
specialist’s weird response threw him off at first, but after Ngai explained to
him that he had skipped two grades, things started to make more sense.

“I think I had to triple
confirm,” Spring said. “I was like, ‘So you’re going to graduate high school
with this date of birth?’ And he said, ‘Yes.’ So I was like, ‘Okay let’s
do this.’”

When he came to Illinois at 16 years old, Ngai was the youngest member of the Illinois men’s varsity gymnastics team ever and the youngest known athlete to compete for the University.

Ngai has become one of the best pommel horse gymnasts in the country
and his head coach does not believe it has been by chance.

Spring says that the
event specialist’s attention to detail and relentless work ethic has allowed
him to perform very well throughout his sophomore campaign despite his age. It is something he expects Ngai to continue when Illinois heads to Columbus, Ohio, for the Big Ten Championships this weekend.

After dozens of competitions throughout
his four years at the University of Illinois, senior Logan Bradley is itching
to compete in his final Big Ten Championships.

Earlier this week the Illini
team captain tweeted that he can’t keep his mind off of Friday’s competition
and believes his team will be ready.

Bradley went on to say that he is
certainly focused on the upcoming meet, but admitted that he does find himself
getting nostalgic about the little time he has left with his team. The senior
said that he is trying to soak up every moment, because what once seemed
so far away – the end of his collegiate career – is just around the corner.

Entering one of the biggest meets
of his life this Friday, Bradley believes that as Illinois’ leader, he must not
let the finality and nostalgia of the event turn him into a prisoner of the
moment. Balancing his emotions has proved to be a tough task for Bradley over
the last few weeks, but one image helps to keep the senior grounded when he
feels himself getting a bit overwhelmed.

“For me it all just comes back to
my dream of holding that trophy up,” Bradley said. “I think of what I’d do.
Whether I’d like kiss it or something like that that … It’s every athlete’s
dream … so whenever I get sidetracked, I think of that idea and it brings me
back to what I need to do.”