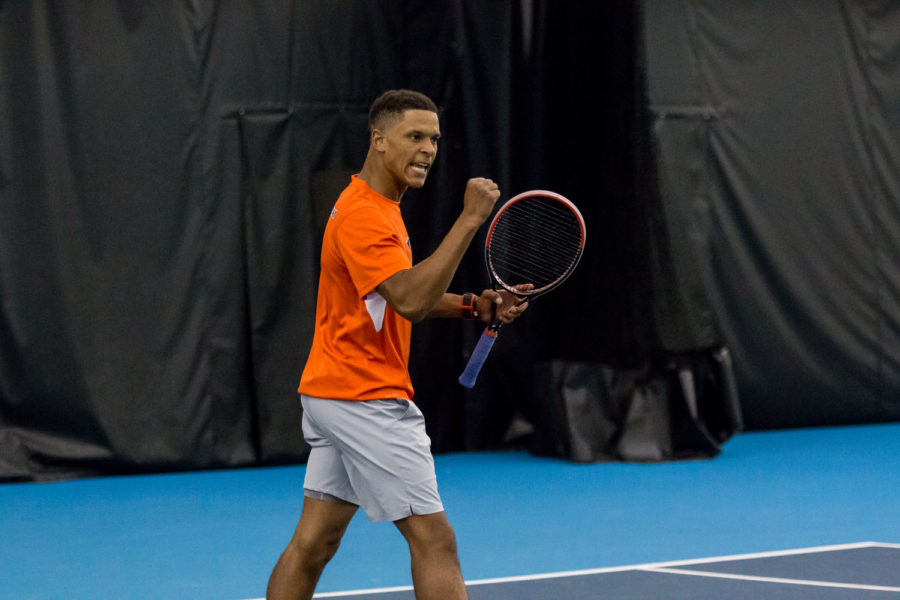 Illinois’ Julian Childers celebrates after scoring a point in his doubles match against Notre Dame at the Atkins Tennis Center on Friday, January 22, 2016. Illinois won 4-0.

The Illinois men’s tennis team faces Big Ten foe Minnesota on Friday at Atkins Tennis Center and will be the Illini’s first of three matches on the weekend.

Despite coming off a win Sunday against Purdue the Illini fell five places in Tuesday’s International Tennis Association (ITA) rankings to No. 15.

The Golden Gophers come into Friday’s match unranked and have yet to win a conference match this season.

Minnesota has lost its past two matches to Nebraska and Iowa. The Gophers have also lost four out of their last five matches and are just 1-7 on the road this season.

In the last five meetings between the two teams, Minnesota has a record of 3-2 against Illinois, with the most recent victory coming last season.

In last season’s matchup, the Illini entered with an undefeated Big Ten conference record at 6-0.

The lllini tied the Gophers in singles play during last season’s matchup before losing both of their doubles matches.

Minnesota sophomore Matic Spec upset then No. 23 Jared Hiltzik in singles play in three sets. Spec finished last season with a 31-5 record and ranked No. 60 in singles play.

Hiltzik, on the other hand, finished last season with a 33-13 record in singles play and ended the year ranked 23rd in the country.

With Minnesota’s struggles this season, junior Julian Childers said that the team is still going to treat this match like any other match.

“We lost to Minnesota last year and as a result, we had to share the Big Ten title with them and Ohio State,” Childers said. “We want to avoid something like that from happening this year, so we’ll come at them with everything we got.”

Childers did not play against the Gophers last season because he redshirted.

Childers has a .500 record in singles play this season and is 9-8 with three different partners in doubles play.

In order for the Illini to come away with a win on Friday, Childers said that energy is the key to success. Minnesota will take on a different Illinois team from last year because it lost four players to graduation.

“It’s hard to compare us to last year’s team because we are such a different team,” Childers said. “I redshirted last season and didn’t practice or travel. I think this year’s team is doing a good job of showing that we can battle with the best in the country and we just need to put a few more pieces together to get to where we want to be – an elite team.”