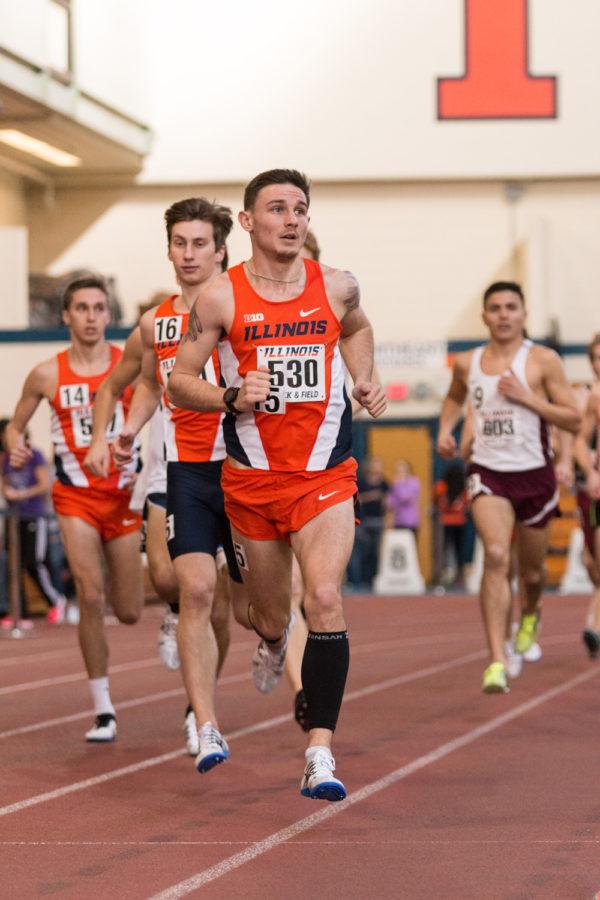 Illinois’ Dylan Lafond competes in the 3000 meter run during the Orange and Blue meet on Saturday, February 20, 2016.

Tweet: .With a roster missing some of their best athletes @IlliniMTrack heads to California for the Stanford Invite. #Illini

After an indoor season where the Illinois men’s track team struggled to stand out, the team will be starting off the outdoor season at the Stanford Invite and fielding a roster that looks very different from the indoor one.

While athletes like Jonathan Wells and Dylan Lafond offered many of the silver-linings to an otherwise uneventful indoor season, neither will compete after being redshirted for the rest of the year. All-American hurdler and sprinter Dave Kendziera, who spent much of the indoor season struggling with injuries, will redshirt. Garrett Lee will redshirt as well.

Head coach Mike Turk explained that he uses the redshirt as a useful tool to further players’ personal interests and the team’s championship interest.

“The pursuit is to win championships, whether it was last year, next year or the year after,” Turk said. “ If all things were perfect, we would have the talent in the program to win this year, and certainly I feel great about next year with almost everyone coming back.”

Despite the fact that the current roster isn’t nearly as competitive as it could be, the U.S. Track and Field Coaches Association has the team ranked ninth nationally. The rankings are pulled from data of the Illini’s last outdoor season, where Illinois had a top-ten finish at the outdoor national championship.

Other NCAA coaches may be unaware of Turk’s redshirting plans which sideline some of the team’s best athletes. While the Illini could still be a competitive team, most Illini athletes and coaches make it clear that this season is one for growth.

“This is a rebuilding year,” sprinter Devin Quinn said. “It’s kind of a weird year, but next year we are planning on jumping out there and getting in front of the Big Ten again.”

While the team may be losing a good amount of its veterans, there is a pool of young talent to focus on.

Quinn, after racing indoors for the first time, will finally get to compete in the outdoor setting he was so used to in his home state of Florida. Redshirted for the indoor season, Jesse Reiser, who won Big Ten Freshman of the Year in cross-country, should bolster a long distance roster that is suddenly missing two of its best runners.

This weekend will test that distance team. The Illini will take on not only one of the toughest long-distance teams in Stanford, but participate in a meet that often has some of the best times in the 5000 meters and 10000 meters.

While Turk is always optimistic with his team, he recognizes that the Illini have had trouble starting the outdoor season before, so it might take a meet or two for Illinois to reveal its true form.