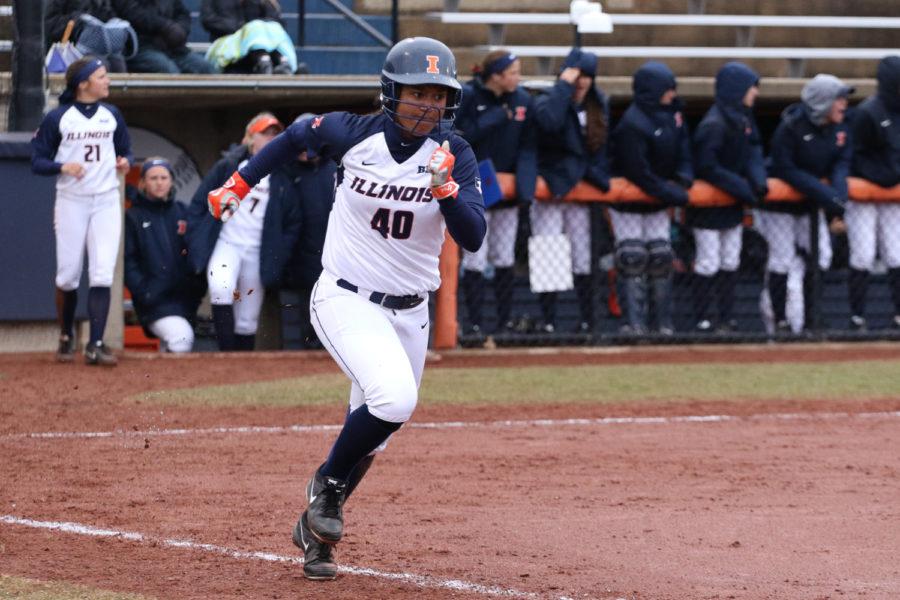 Tweet: [email protected] brings hot streak at the plate into this weekend against RutgersAfter nearly a week of downtime, the Illinois softball team will resume Big Ten competition this Friday at home against Rutgers.

This weekend’s matchup follows some much needed rest for the Illini after playing a spring break schedule that featured 10 games in nine days. Illinois finished 7-3 over the span and kicked off Big Ten play with a series win over Nebraska.

Lately the Illini have been producing strong offensive numbers. In its double-header against Nebraska, the offense put up 18 runs in just 13 innings against the Huskers.

Leading the team on offense has been junior Nicole Evans, who has produced well in the cleanup spot. Evans is 5-8 in her last two games with seven RBIs and two runs scored. She is batting .455 in conference play – the third highest in the starting lineup trailing only hitters Carly Thomas and Alyssa Gunther. Evans also sports the highest slugging percentage on the team amongst starters.

It’s not just the top of the lineup that’s coming through for Illinois. Eight Illini are hitting over .300 on the season along with eight players who are in double digits in the RBI department.

The Scarlet Knights are sitting at 15-18 overall, with a 0-3 conference record. Rutgers plated 10 runs in its first Big Ten series against Penn State, but eight of those came in a game-one loss.

Rutgers began the year 0-8, and although the Scarlet Knights have shown flashes of potential, they have not been able to gain momentum. They are 0-6 against ranked teams on the year. Although the Illini aren’t in the top 25, they did receive a vote and could be on the brink of breaking into the rankings.

One of the big differences on paper between the Illini and the Scarlet Knights is the pitching staffs. The Illinois staff boasts a 3.13 ERA on the season, while Rutgers is over a point higher at 4.16. Illinois has relied on their juniors all season, as Jade Vecvanags and Breanna Wonderly have carried the pitching staff.

The Illini will take the field Friday at 6 p.m. to open the series with Rutgers at Eichelberger Field.