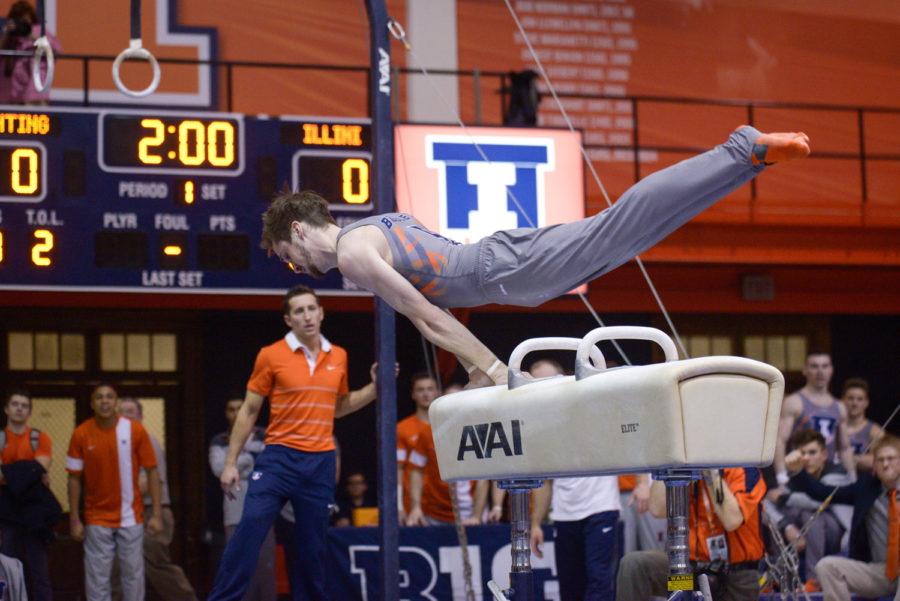 There is a giant orange poster on the wall at Kenney Gym. But unlike the many other orange advertisements around Illinois’ campus, it does not feature Illini athletes, and it has nothing to do with the recent hiring of head football coach Lovie Smith.

It simply reads, “0.6” in big black letters, and for the Illinois men’s gymnastics team, who finished runnerup to Penn State in the Big Ten Championships last year, it has been a constant reminder of what could have been.

“I won’t forget,” senior Logan Bradley MG said. “I remember looking up at that scoreboard … last year, and seeing six-tenths. You immediately think through every routine that there was during the meet, all 30 sets, and I immediately thought of what I could have done. Six-tenth’s is so little.”

Battered and bruised, Bradley and the rest of the Illinois men’s gymnastics team will be seeking redemption this weekend in Columbus, Ohio. MG

Since beginning the year 7-0, Illinois finished the regular-season with a 13-4 record – sustaining only one loss at home to NCAA powerhouse Oklahoma.MG

During the second half of their season, the Illini faced a slew of top competition, and they were rarely at full strength.

Aside from the general soreness that many gymnasts feel at this point in the year, sophomores Bobby Baker and Chandler Eggleston MG are suffering from much more serious injuries – potentially putting Illinois’ hopes of bringing a Big Ten title back to Champaign in jeopardy.

“(They) have injuries that I think are going to be limiting, as far as their ability to compete at Big Tens on all of their events, which hurts us quite a bit,” head coach Justin Spring MG said. “Chandler’s ankles still aren’t back to normal … Bobby’s finger most likely was broken from his warmup against Oklahoma.”

Because of his injury, Eggleston has not competed on floor in nearly two months after winning the event title at home against Temple and UIC. The sophomore standout has also been shut down on vault, after scoring a 13.850 against Michigan three weeks ago – a score well below his season average.MG

Floor exercise and vault are two events that Eggleston dominated earlier in the year, but Spring is doubtful that the sophomore will even compete this coming Friday.

“Without Chandler, I might have to (step in on the floor exercise),” Bradley said. “You just have to be confident in yourself … We don’t need to have all of our talent out on the floor. You really just need the heart and the will to want to hit you set, and hit it to the best of your ability.”

Baker will still suit up in his orange and blue despite a broken right ring finger. Spring says the sophomore will participate in every event except the parallel bars – an event that he believes is Baker’s best.

Throughout his six years of coaching, Spring said that injury-free seasons are rare in gymnastics, and even though his team has had some unfortunate events take place, he still expects guys who haven’t been in lineup to step up if their number is called.

“That’s a tough spot to fill if for the first two months of competition you weren’t competing,” Spring said. “But I think the team has done a good job staying resilient, staying positive and keeping the focus and energy on being ready.”

In spite of the adversity, and regardless of how beat up they look on paper, for Spring it all comes back to losing by six-tenths to Penn State. In his eyes, that should give his team more than enough motivation to give it their all in Columbus no matter who is out there.

“Every athlete needs to do what he needs to do to feel prepared and confident to compete in the competition,” Spring said. “I take it personally, I always did … You put your life on hold to train for this post-season event.”