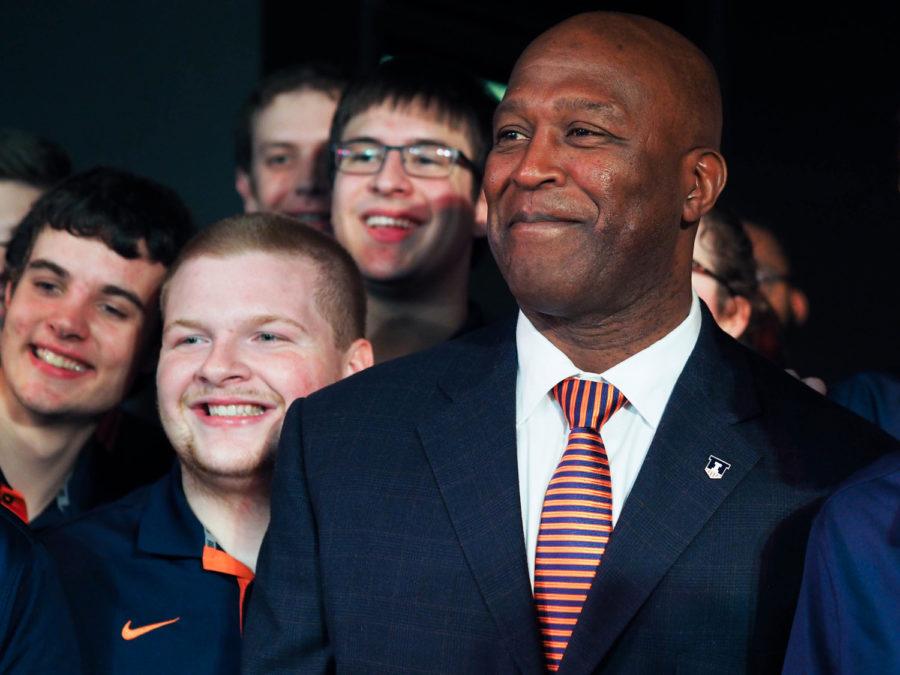 Lovie Smith thanks the Illini Marching Band in the Illini Union on March 7.

Tweet: .#Illini columnist @KevOMcCarthy was given a tall order from Lovie Smith. Now, he needs your help.Lovie Smith called upon me to do a service for him.

First, allow me to provide some context. During Smith’s time in Tampa Bay in the late 90s, he helped run Tony Dungy’s cover-2 hybrid defense. It was coined the “Tampa 2” defense at the time and still is referred to as such. Smith installed the defense during his time in Chicago, too.

I asked him a question after Tuesday’s press conference about his plans to use the “Tampa 2” in Champaign.

“That’s kind of a misnomer when people say Tampa 2 — since we don’t run much cover 2,” Smith said. “That’s how everyone describes it though. But, this is an Illini defense we’re trying to put together now.”

So, I asked, if not the Tampa 2, what should we call it from here on out?

Lovie Smith, a childhood hero of mine, just assigned me with a task. I began to perspire immediately.

When I thanked him for his time afterwards, and he shook my clammy hand, I should have thanked him for handing me a column idea on a silver platter. Also, confession, I’ve listened to the recording of our interaction about 20 times. I also had to resist the urge to ask him to snap a selfie with me — maintaining professionalism can be difficult for me.

Anyway, my wheels started spinning after he asked me that. So I thought to myself, “Self. What is this defense going to be about?”

In Chicago, Lovie always preached the importance of taking the football away.

“If you’re on the defensive side of the football, you can’t have a defensive mentality. It’s gotta be an offensive mentality,” Smith explained. “Taking something and scoring. That’s the goal of every play: score.”

I thought that was brilliant when Lovie said it — it was some form of football poetry. Few would compare Lovie to Shakespeare, but that quote was beautiful.

The idea of having an offensive mindset is smart. Take the ball and try to score with it. Don’t sit back.

Smith will have the help of his new defensive coordinator, Hardy Nickerson. Nickerson made five pro bowls during his 16 seasons as a linebacker in the NFL. He was coached by Smith in Tampa Bay and coached under him during Smith’s time as head coach of the Buccaneers.

“Taking the football away is something we will work on every day,” Nickerson said. “It’ll be a part of our DNA.”

The defense Smith and Nickerson envision should excite Illini fans. Not to mention, both of these men are going to attract top defensive talent to Champaign. Their NFL pedigrees make their recruiting pitch so simple: Want to play in the NFL? We know what it takes to get there.

A Super Bowl-caliber head coach paired with an all-pro linebacker — it doesn’t get much better than that.

Beyond their experience, both of these guys are honorable men. Smith’s calm demeanor carries with it an unusual charisma. Nickerson’s smile and honest tone make him as charming as they come. There’s not a mother in America who wouldn’t want their son to go and play for these two men. They preach character, academic diligence and strive to be successful on the field. It’s not cliche from these two, it’s genuine.

This defense will be talented and tenacious with an eye on taking the football away for years to come.

So, back to the beginning of this column. What should we nickname this new defense?

You might be thinking to yourself, “Kevin, you creative-genius, what stroke of brilliance has dawned upon your great mind?”

I can’t share it with you. If I told you, I’d have to eliminate you. Or maybe I really just can’t think of anything. It’s one or the other.

Either way, I want your help. I’m now the middle-man between you and Lovie Smith. So, you’re working for me. But, I’m working for Lovie on this one. We both got a pretty sweet deal.

Help me come up with a name. Preferably, the name should include “Illini” with some verb in the present participle before it. It would be a cool play off the name “Fighting Illini.” Or, you could also think of an alliteration.

I need your help. Because once upon a midnight dreary, while I pondered weak and weary, I couldn’t come up with diddly-squat. Maybe you will.

Please comment your ideas on Facebook, tweet them at me, send me emails, contact me via carrier pigeon — or whatever you kids do these days. Just send your ideas. I’ll write a column about the best ones next week. The challenge is on.

Lovie needs you. And so do I. One of those should motivate you.

Kevin is a sophomore in Media