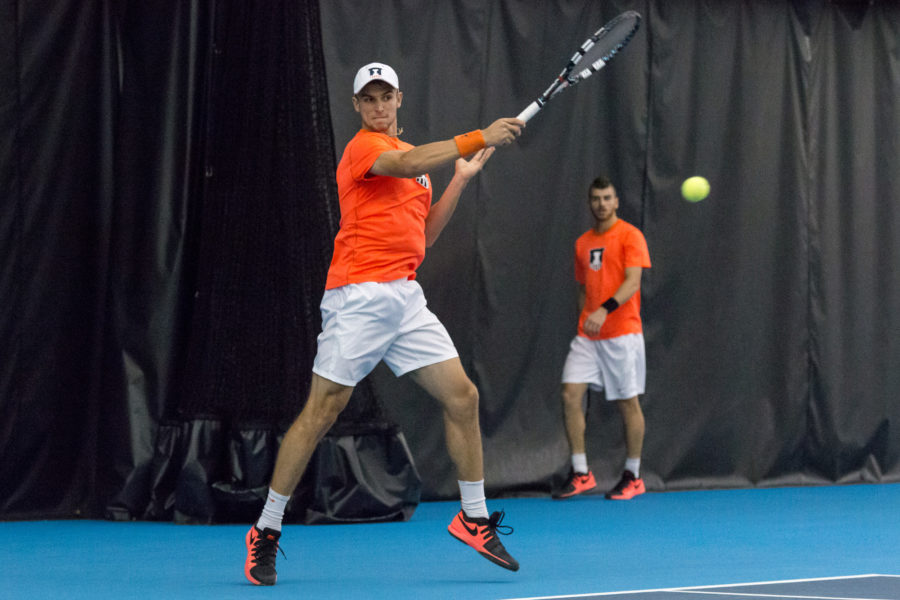 Sunday afternoon, No. 15 Illinois men’s tennis played not one, but two matches inside the Atkins Tennis Center.ej

In the first game of the doubleheader, the Illini took on No. 30 Wisconsin.ej The Badgers came into the match with only two losses, but left with three after falling to the Illini.

Wisconsin, on the other hand, suffered its second straight sweep, as the Badgers also lost 4-0 to Northwestern on Friday.ej

“They came out really excited,” Dancer said. “That’s kudos to them for really showing up. They tested us in doubles and tested us in spots in singles as well, so it was good to show up the way we did.”

The duo of Aron Hiltzik and Aleks Vukicej started off doubles play by defeating Josef Dodridge and Lamar Remy, 6-2.ej

That performance was followed up by Pengxuan Jiang and Jared Hiltzik’s match-clinching win, which gave the Illini the elusive point in doubles.ej

Both Illini pairs won in doubles play in the second half of the double-header against Ball State as well.ej The Illini have earned the doubles point in each of their last six matches.

Illinois continued to ride its doubles momentum into singles play against Wisconsin, winning in straight sets in all three of its clinching matches.ej

The Illini have continued their domination of the Badgers in recent years. They have now won their last eight matchups, three by shut out.

In the second half of the doubleheader against Ball State, the Illini rested starters Jared Hiltzik and Alecks Vukic in singles play. ejFreshmen Pablo Landa and Pengxuan Jiang competed in their spots.ej

Coming into the match, Jiang had yet to win in three opportunities.

Jiang changed that on Sunday, as the Chinese native defeated Marko Guzina, 6-0 and 6-3 to earn his first win in singles.ej

Freshman Asher Hirsch also contributed to the win over Ball State with a 6-1, 6-3 victory over Conner Andersen. The win was Hirsch’s fourth of the season in singles play.ej

With his brother watching, sophomore Aron Hiltzik delivered a win of his own over Lucas Andersen.ej

Aron Hiltzik’s match was also the first time he played as the No. 1 singles player, which he was excited about.ej

“It’s really fun to play at the top of the lineup,” Aron Hiltzik said. “I get to play against good players and I think I played pretty well today. I was really working on my forehand a lot and it just worked out for me.”

Aron Hiltzik had a battle early on, as the first game with Andersen went into a tie-breaking set — which Hiltzik won — but the sophomore battled back to dominate the final set, 6-1.ej

He said that the first set was tough because he couldn’t read Andersen’s serve early on.