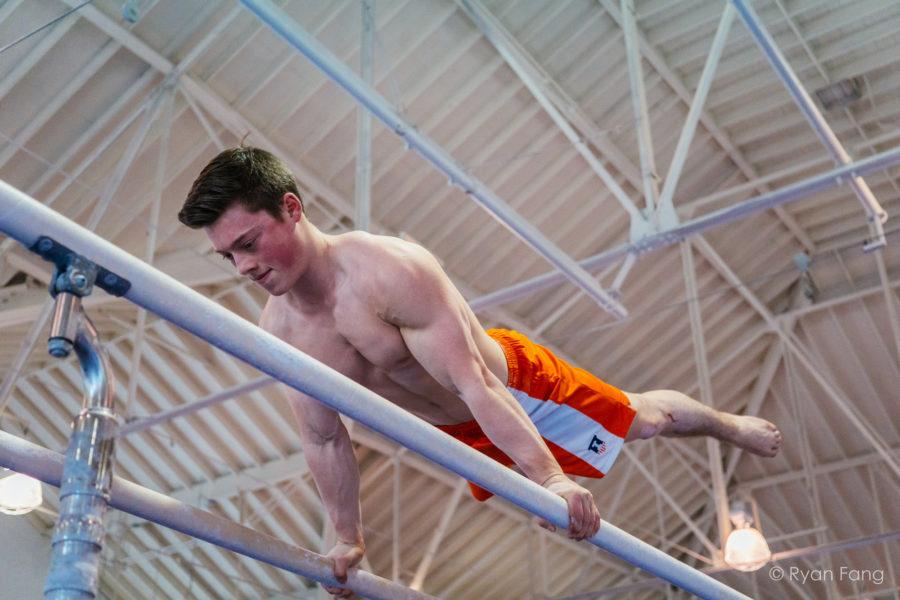 Alex Diab at his practice.

His teammates call him a dad. His school calls him an Illini. The Big Ten calls him a still rings champion.

Following a weekend in which the Illinois men’s gymnastics team came up short of the Big Ten team title for the second year in a row, freshman Alex Diab didn’t leave Columbus, Ohio, empty-handed. MG

Diab led the team in scoring on three of its six events this past Saturday, and despite the close loss to competition favorite Ohio State, the Glen Ellyn native’s MG efforts did not go unnoticed.

His strong all-around performance earned him a spot in the Big Ten event finals for the floor exercise and still rings. The following evening, he took home his first career Big Ten crown.MG

Diab’s father Mark was back-to-back still rings National Champion in 1985 and 1986 for the Iowa State Cyclones, MG and although Alex couldn’t exactly follow in the footsteps of his father – men’s gymnastics was dropped at Mark’s alma mater in 1994MG – Alex still made headway of his own.

“My dad was at the competition,” Diab said. “My whole family was there. They were super excited and super proud of me. Just happy that all my hard work has paid off and I’m succeeding in something I love to do.”

Leading off on the apparatus, Diab scored a 15.125 MG and with eight gymnasts still left to compete, a lot of things had to happen before he would know the title was his.

One after one, scores were posted, but when it was all said and done, no other gymnasts would touch his high score – earning Diab his fourth still rings title and eighth title of his career in just his first season with the Illini. MG

“We’ve had some crazy, wild, freshman stories where guys have come in and done exceedingly well that first year out” head coach Justin Spring MG said. “Alex is one of those success stories.”

Unlike other gymnasts who have had great first year campaigns, Spring says Diab’s willingness to step up and be a vocal leader is what separates him from other outstanding freshmen.

Spring said the only reason Diab can get on his teammates, without team captains senior Logan Bradley and junior Tom Gibbs feeling like he is stepping on their toes, is because he holds himself accountable as well. Day in and day out, the all-arounder doesn’t cut any corners, and when the lights shine their brightest, like they did this past Saturday, he rises to the occasion, Spring said.

“That is exactly why they call him dad,” Spring said. “And it’s not to say that he’s not young and having fun, but at the end of the day, you know 100 percent his heart is dead set to make this team the best it can be. Through his eating habits, preparation and things you can’t even identify, you just know.”

Diab was the only who had the opportunity to stand highest on the podium, after being named First Team All-Big Ten for his fantastic display on still rings.

“It feels awesome,” Diab said. “It’s a huge accomplishment. One of my goals coming into the season was to win the Big Ten title. I’ve got two more weeks to keep on going and hopefully push for a national title.”