Illinois softball team travels to Minnesota for a conference matchup 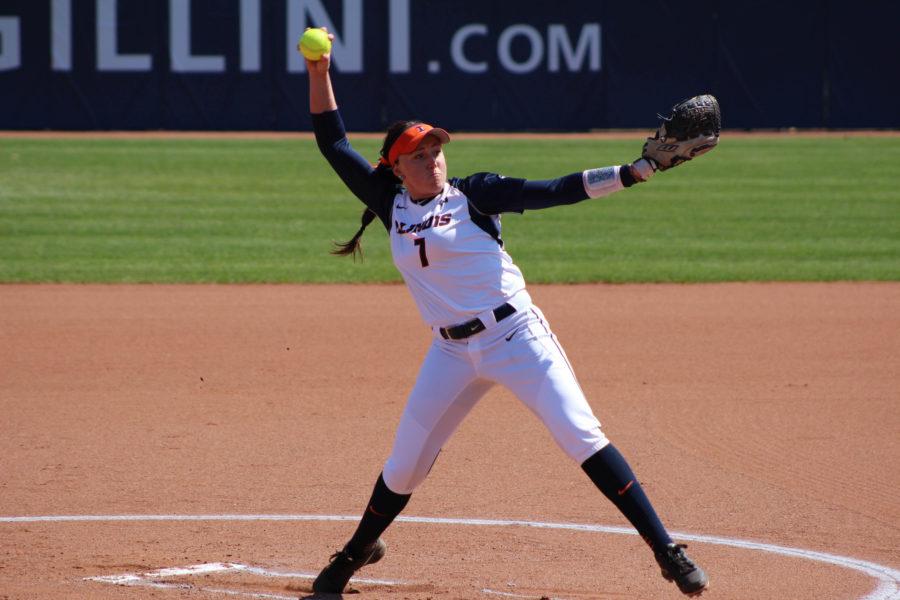 Illinois' Jade Vecvanags pitches in the game against Rutgers at Eichelberger Field on Sunday, Apr. 3, 2016

Illinois softball will get its first big test of the season this weekend with a trip up north to Minnesota, where the team will take on the Golden Gophers in a three-game set.

Minnesota sits at No. 22 in the ESPN.com/USA Softball national rankings, third-highest among Big Ten teams, while Illinois is currently unranked. Ranked second in the Big Ten, the Gophers are fresh off a series win against Northwestern last weekend, and the team moved to 5-1 in conference play.

Illinois will come in as the underdog, but is riding high after a 7-1 win over Illinois State on Tuesday. The win was much-needed after Illinois dropped its last two games against Rutgers and only managed one run in the series finale.

Illinois’ offense came alive in Tuesday’s matchup against the Redbirds, and it centered around the usual suspects. Junior Nicole Evans and sophomore Annie Fleming went a combined 7-7 from the fourth and fifth spots in the order, adding three runs and four RBIs to the Illinois tally.

Junior pitcher Jade Vecvanags picked up the win, throwing six innings of one-run ball and only allowing four hits. Strong offensive outputs have been common for Illinois throughout the season, which Vecvanags and the pitching staff have been happy to see.

“There’s not really a weak spot in our lineup. We think that no matter where we’re at, we’ll have a leader out there who can get on base,” Fleming said. “We just feed off of each other.”

Illinois’ hitters will need to be at the top of their game beginning Friday, when the team likely faces one of the best pitchers in the conference. Junior Sara Groenewegen has commanded the pitcher’s circle all season long for the Gophers, going 18-4 across 24 games. Groenewegen has tallied 15 complete games, and her 1.87 ERA is second in the Big Ten behind Lilly Fecho of Purdue.

In order for the Illini to truly get the offense going against the Gophers, head coach Tyra Perry said the team must execute some small ball strategies.

“I feel like we need to execute a little bit more consistently,” Perry said. “If we get more efficient at our bunting, hit-and-runs and slap-and-runs, I think it will help our overall game.”

Although the starting pitchers are not set for the weekend tilt, Perry said the team has usually gone “Jade, Brea (Wonderly), Jade” in three-game series, and she said it is likely the coaches will stick with the same game plan for Minnesota.