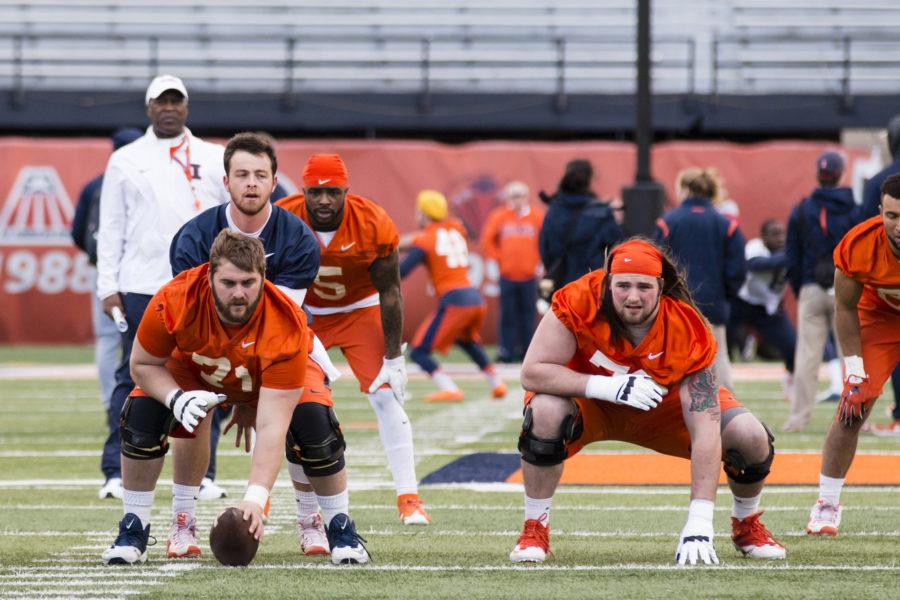 Instead, you’ll see an innocent, peach-faced kid who would probably have a tough time striking fear into the hearts of many defensive linemen.

But now, with the beard of a lumberjack, Megginson’s intimidation factor is much greater than when he was first recruited by Illinois — and he probably knows it.

“I just had such a babyface, and a pretty big head, too,” Megginson said with a wide grin. “So I thought (longer hair) might cover it up a little bit.”

Clocking in at 6-foot-5 and 300 pounds, Megginson has all the makings of a full-time offensive lineman and will have the opportunity to be just that for the Illini this season. The departures of long-time starting guard Ted Karras and felllow senior Chris Boles left large holes in the Illini offensive line, and Megginson is an early favorite to fill one of those starting spots.

Since the start of spring ball, Megginson has seen most of his reps come with the first team. The Illini just had their first full-pad practice of spring Tuesday, and offensive coordinator Garrick McGee has already taken notice of the redshirt freshman’s potential.

“He’s doing really good, I like him,” McGee said. “He’s playing guard for us right now. It looks like he fits in really well with the group; they have good chemistry.”

Megginson was recruited by former head coach Tim Beckman and committed to Illinois as a consensus top-20 lineman in the nation.

Hailing from Jacksonville, Illinois, Megginson has been about a two-hour drive away from the University for as long as he can remember. Now, in his second full year on campus, Megginson is still taken aback by the fact he can call himself an Illini.

“I still think about it,” Megginson said. “I’ve walked these halls in Memorial since probably sixth grade — it’s really a dream come true. I’m very blessed with the situation we’re in, and the future just keeps looking better and better every day.”

The four-star recruit came to the University thinking he would be spend his collegiate career taking orders from Beckman and was excited to do so. But following Beckman’s controversial exit, Bill Cubit became Megginson’s first official head coach and the man under whom he redshirted.

Now, not even into his second official season with the team, Megginson will have his third college head coach: none other than ex-NFL head coach Lovie Smith.

Megginson admitted he’s never followed the NFL too closely, but as an Illinois native, Smith was one of the few head coaching names he knew. The 18-year-old lineman is still nearly speechless when reminded he’ll be playing for Smith in 2016.

“I mean, wow,” Megginson said. “Every time we see him out here, you can kind of catch all of us grinning. When he walks in the meeting room it’s like, ‘Wow it’s really true.’”

The shell-shocked sentiments of playing for Smith are shared by freshmen and seniors alike, and they’ve added to the team’s overall chemistry.

Regardless of who they play for, though, chemistry isn’t something Megginson and his fellow linemen have to worry about.

Their tight-knit culture is apparent through moments like freshman Nick Allegretti scaling senior Joe Spencer to form a 600-pound totem pole in the middle of Megginson’s post-practice interview with the media. Megginson made sure to give his teammates high-fives for their efforts after the attempted piggy-back ride ended in a pile of linemen on the ground.

“The guys are just like that,” Megginson said. “They’re great to be around, not just in the meeting rooms — I love being around them outside of that. I’m going to really enjoy that.”

With the chance to step into an offensive line that was superb at pass protection last season, Megginson realizes that run blocking will be a major focus. After Tuesday’s practice, Megginson said running back Reggie Corbin brought up the idea of the running backs and linemen taking care of each other, extending the respective brotherhoods of each position.

“We’re really out here looking out for each other,” Megginson said.

“I believe in the big boys,” Vaughn said. “The line will help us go get a lot of rushing yards this year.”