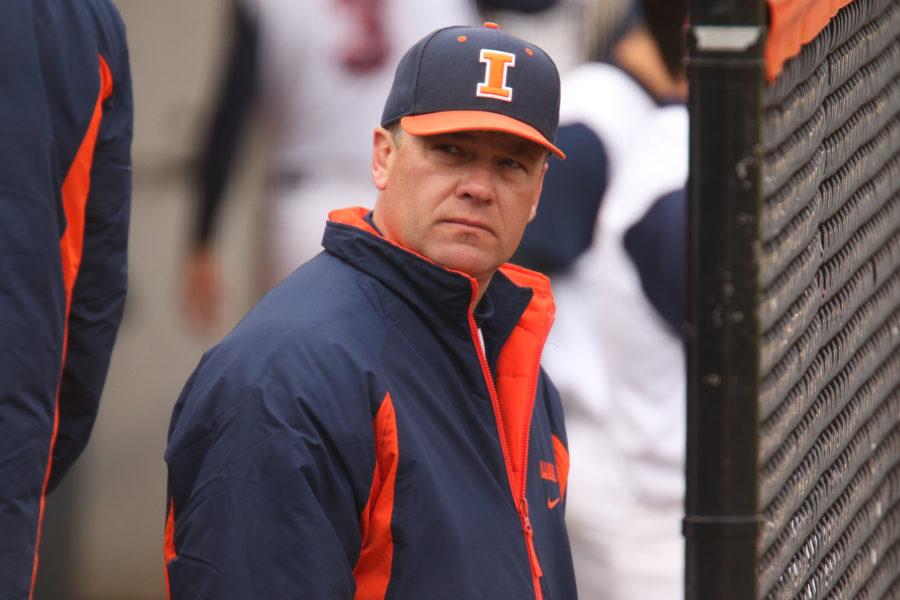 Illinois' head coach Dan Hartleb watches on from the dugouts during the game against Lindenwood University at Illinois Field, on Wednesday, March 18, 2015.

Tweet: Despite the opportunity, @Illinibaseball could not capitalize when they needed to and lost in its matchup with Iowa.

The Illinois baseball team had a chance to take back the
lead against the Iowa Hawkeyes in the top of the ninth Sunday, but was
unable to capitalize. Illinois finished its weekend series with the Hawkeyes with two losses and one win.ag

The Illini (13-16, 4-5 Big Ten) were losing 4-3ag to the
Hawkeyes (13-14, 4-4 Big Tenag) in the final frame, but were threatening with
bases loaded with one out and junior Matthew Jamesag at the plate. James struck
out, and then freshman Doran Turchin grounded out to the pitcher to end the game.ag

Head coach Dan Hartleb said he was not happy with his team’s
situational hitting, or lack thereof, in Sunday’s game.

“We had every opportunity to win the game,” Hartleb said. “We
had three situations with less than two outs and runners in scoring position,
which means we had three opportunities with two outs. That’s six opportunities
to score, and we just didn’t situational hit.”ag

Freshman Cole Bellair made his fifth start of his career
Sunday, pitching 5 1/3 innings and giving up four runs on five hits. Bellair kept
the game close for the Illini, but stumbled a little bit in the fifth.ag He
started the inning by leaving two pitches up in the zone, allowing the
Hawkeyes to put two runners on base.ag

After grinding to pick up two outs, Bellair left another
pitch high up in the zone. Iowa’s Joel Booker punished the rookie for his
mistake, sending the botched pitch over the wall, and giving the Hawkeyes the 4-2
lead.ag

“Cole competed today,” Hartleb said. “He just has to
continue pounding the bottom of the strike zone. He does not have to be perfect
by any means, but he does have to make good pitches in crucial situations.”

Since moving out of the bullpen and becoming the Sunday
starter, Bellair is averaging close to six innings per game, but in
his last two he has only been able to go five. ag

Hartleb has no problem
keeping his young arm in the game for as long as possible.

“I want every starter to be efficient and keep their pitch
total low,” Hartleb said. “If they keep their pitch total low, then I am down to
let them pitch complete games. Now is that realistic, I don’t know, but that is
what you strive for. Efficiency and going as deep as you can.”

After Illinois lost the series to Nebraska last week,
Hartleb said he needed his upperclassmen to step up their play and be tougher. Senior
Michael Hurwitz heard the message loud and clear. Hurwitz has been on fire in
Big Ten play. He is seven for his last 11 and batting .438 in Big Ten play.ag

Catcher Jason Goldstein is back to 100 percent after
sustaining a hamstring injury before the conference season began. The
Illini need his production to return to Goldstein’s usual high levels. Before
the injury, the Illini captain was batting over .400.ag

But the increased level of play from those two isn’t enough
for Hartleb.

“Other than (Goldstein and Hurwitz), it hasn’t been good,”
Hartleb said. “You are not always going to produce, but having a good mental
and physical approach, you can do that every time.”

Hurwitz went 2-for-4 with an RBI on the day.ag He was also
walked in the ninth, and was stranded on third base when the final two Illini
got out to end the game. He was on base for two of the three situations that
the Illini stranded bases loaded.

“I thought it was a well-played game,” Hurwitz said. “Not
coming up with a big hit in a big situation killed us today.”