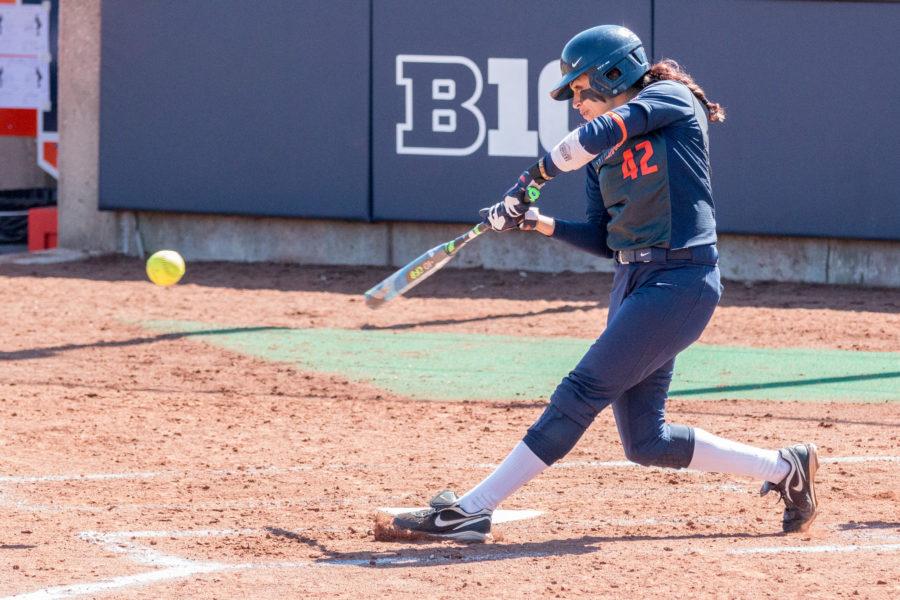 Illinois’ Ruby Rivera hits a ground ball to second base during game one of the doubleheader against Nebraska at Eichelberger Field on Saturday, March 26. The Illini won game one 8-3 and game two 10-2.

Big Ten play has not been kind to the Illinois softball team so far.

Coming off another series loss against the Minnesota Golden Gophers, the Illini currently sit at 3-6 in conference play.SO For most teams, this would be cause for panic, but for Illinois softball, this is not an uncommon occurrence.

Last year’s team finished Big Ten play with a 14-9 record, but the team’s start was anything but hot.SO Minnesota swept Illinois to open conference play in 2015. The Illini then rebounded by winning eight of its next nine and finishing fifth in the conference.SO

Illinois’ next two conference series will be against unranked Northwestern and Purdue teamsSO, which will provide the Illini their best shot at getting back on track.

Just as fast as the Illinois offense burst onto the scene during the team’s first three conference wins, the offense has completely gone away.

The Illini have averaged just two runs per game over their last four conference losses.SO Illinois has still managed to keep eight players north of the .300 mark at the plate in conference play, but many of the numbers have dropped significantly. SOSophomore Annie Fleming’s batting average has dropped nearly 80 points since the first conference series against Nebraska.SO

Despite the rough series at Minnesota, cleanup hitter Nicole Evans is not worried about the team’s ability at the plate.

“We’re still very consistent, even though we had that one bad showing,” Evans said. “We’re very confident. Every single person in our lineup can hit, and I feel like we’re about to go on a big streak here.”

Pitching has faltered alongside hitting

On the flip side, Illinois pitching has come at a premium along with the offense. Led by starters Jade Vecvanags and Breanna Wonderly, the pitching staff surrendered 25 runs last weekend to the Gophers, but assistant head coach Kassie Stanfill said they aren’t going to let that result linger in their minds.SO

“We’re just going to move on and use it as a learning opportunity,” Stanfill said. “It just doesn’t help when you give up so many extra base hits; it’s hard to recover from that.”

The team ERA has swelled to 5.98 in conference play, one point higher than two weeks ago.SO