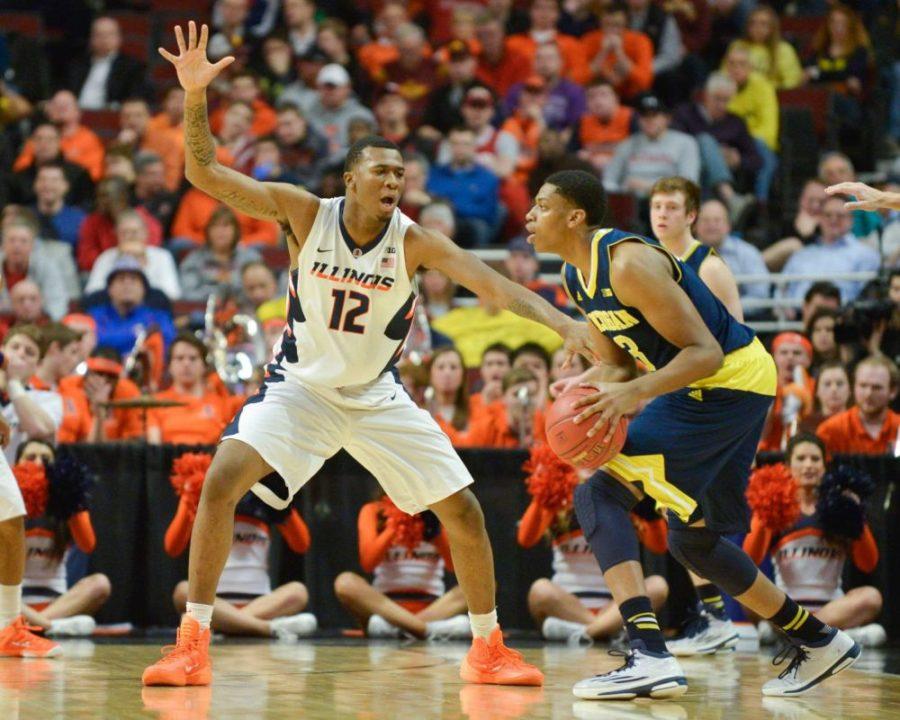 The majority of Illinois student-athletes made headlines for the right reasons in 2015-16, but six arrests stained several Illini athletic programs in the last year.

Four members of the Illini men’s basketball team — one third of head coach John Groce’s allotment of scholarship players – were arrested over a seven-month span, three of whom were accused of violent crimes.

Junior forward Darius Paul was arrested on the team’s summer European trip on Aug. 15 for public intoxication, vandalism and resisting arrest in Deauville, France. It was Paul’s second alcohol-related arrest as a member of the basketball program, and it was reported that he was damaging luxury cars in the French tourist town before he was apprehended. Paul was sent home early from France and was dismissed from the team Aug. 21.

Sophomore forward Leron Black was arrested Feb. 19 following an altercation with a Canopy Club security guard at a Lil Durk concert in Urbana. Black allegedly threatened a bouncer with a knife, but pleaded not guilty to a felony charge of aggravated assault. In April, Black pleaded down to a misdemeanor charge of aggravated assault and was sentenced to 12 months of conditional discharge after being accepted into a diversionary program. He remains suspended indefinitely from team activities.

Junior guard Jaylon Tate was arrested three weeks later on March 12 on domestic battery charges. Tate pleaded not guilty to the charges, and his trial is set for June 7. He remains suspended indefinitely from team activities.

Junior guard Kendrick Nunn was arrested on domestic battery charges on March 17, just five days after Tate was booked for a similar crime. Nunn is accused of pushing and striking a female victim in the back of the head during an altercation at her apartment. Nunn pleaded not guilty to the charges, and his attorney is hopeful the case will be resolved before it reaches a jury trial.  Nunn’s next court appearance is scheduled for May 18, and he remains suspended indefinitely from team activities.

The school’s other revenue-generating sport wasn’t spared from the police blotter. Illini football player Julian Jones was arrested following an October incident in Georgia and was suspended from the football team in mid-November. The freshman linebacker was arrested on campus on Nov. 11 for being a fugitive of justice on a charge of aggravated sexual battery and simple battery. Jones’ suspension was lifted and he was cleared to return to practice in early April.

Then early Feb. 7, junior softball player Ruby Rivera was charged with criminal damage to property after surveillance video captured her breaking one of the arms of the Illini Chabad’s outdoor menorah.

Rivera was originally charged with a felony due to the crime taking place outside a house of worship. She later apologized to the Chabad’s rabbi and was placed in a diversion program similar to Black’s, and will be able to plead down to a misdemeanor if she meets the terms of the “second chance” program.

The high-profile nature and sheer frequency of the crimes stood out. Basketball head coach John Groce came under intense scrutiny following the spate of arrests, which occurred on top a miserable 15-19 season on the court.

Illinois athletic director Josh Whitman felt the need to address the situation and held a joint press conference with Groce on March 24. Whitman reaffirmed his commitment to Groce as the coach heading into next season, while both expressed a shared concern over the hovering allegations.

“We live in an instant-gratification society,” Whitman said. “People want to assume the best way to handle a situation is often construed as the easiest solution. They want a clean slate. That’s not always the best decision. My job, as you all can appreciate, isn’t to make the easy decision. It’s to make the right one.”