2016 Illini of the Year: Isaiah Martinez 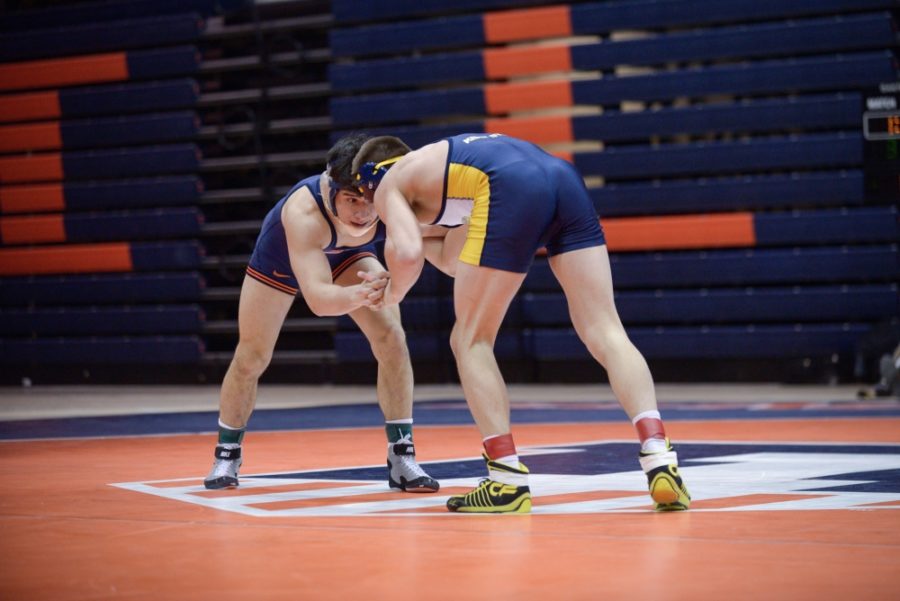 Sonny An | The Daily Illini

Illinois’ Isaiah Martinez looks for an opportunity against Kent State’s Ian Miller during the match at Huff Hall on Sunday, February 15, 2015.The Illini won 38-0.

Entering his sophomore campaign, Illinois wrestler Isaiah Martinez was one-fourth of the way done with the goal he set coming into college: go undefeated and win four national championships.

But on Jan. 23, one part of Martinez’s could no longer be accomplished.

The two grapplers stood face-to-face on the mat at Huff Hall as a 157 pound bout commenced between then-No. 1 (Martinez) and the then-No. 3 (Nolf).

Both men came into the match undefeated and only one came out victorious.

Nolf worked around Martinez’s shots throughout the entire match and countered some of his attacks in the process to eventually take control of the match as it entered the second period.

In the second period, Nolf still continued his attacks and found himself in complete control and would end the match by pinning Martinez to the mat at the 4 minute, 56 second mark of the bout.

As Martinez’s hand wasn’t raised for the first time in a college match, the crowd at Huff Hall was in complete shock.

Preparing for the match, Martinez knew he was going to be in for a fight, but thought if he wrestled the way he knew how then all the cards would have fell his way.

Just two months later, the two would face each other again, but this time with more on the line than just bragging rights.

Martinez went into the 2016 Big Ten Championships as the No. 2-seed and the defending Big Ten champion at 157 pounds.

He came out as a two-time Big Ten champion after avenging his early season defeat to Nolf.

The first part of Martinez’s goal was no longer an option but the second part of his goal was still in his sights as he walked out of Carver-Hawkeye Arena with yet another accolade.

Fast forward three weeks later and Martinez was in the same position against the same opponent again, as the sophomore battled and defeated Nolf for the second time in three attempts.

However, his father, Alfred Martinez, was not there to embrace his son’s victory. Martinez’s father passed away from cancer just one month before his sophomore campaign.

Even before his father passed, Martinez said that he knew how hard it would be to repeat as a national champion.

“It was different than the first one,” Martinez said. “The first one was easy almost, it was easy compared to this one. This one was a lot harder. The challenge wasn’t really harder, as far as guys or anything like that, it was harder to stay consistent and to keep that fire and that drive. It’s hard to keep that level of excellence and standard for multiple years and now I understand that I am a little bit better and am more motivated and focused going into the next year, knowing what I have to do in the offseason.”

Now, Martinez feels that he is more mature than he was a year prior.

After his collegiate career is completed, his next step is to become an Olympic athlete and represent the United States in 2020.

To Martinez, competing in the Olympics would mean a lifetime of hard work finally being paid off.

Martinez said that he wasn’t right physically to compete at the 2016 Olympic trials in Iowa City, Iowa, and instead watched others compete.

“It was probably the worst thing that I could have done,” Martinez said. “Watching other athletes compete for something that I’ve wanted to do since I was four years old, but I’m looking forward to the next quad.”

Assistant coach Mark Perry has been with Martinez since he stepped foot on campus and said that the target that has been on Martinez’s back for, the past two seasons should not matter to him in the end.

“He needs to set his sights on bigger and better goals down the road,” Perry said. “Not only winning the NCAA championship, but becoming the baddest man on the planet and that’s what, I think, if he kind of flips that switch where you’re focused on being the best in the world, then these college kids shouldn’t be too much of a struggle.”