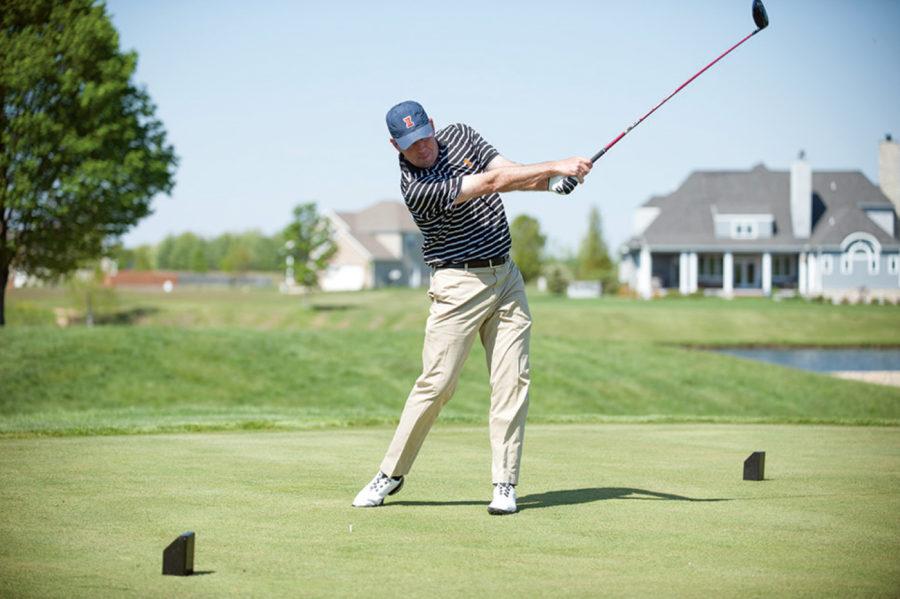 Illinois’s head coach Mike Small tees off from the first hole during a team practice at the Stone Creek Golf Club in Urbana on April 18, 2012.

In Mike Small’s 16 years coaching the Illinois men’s golf team, the team has won seven Big Ten titles and seemingly everything else at least once.

As a result, Illinois needed to add a few more trophy cases in the Demirjian Golf Practice Facility since he started.

While the Big Ten tournament titles still remain above a mantle and under a TV in the practice facility, there’s one title that has not yet found a home in any of Illinois’ trophy cases at the facility: the NCAA title trophy.

The Illini finished tied for fifth in the NCAA tournament last year, tied for third the year before and placed second in 2013.

“We will make a spot (for the trophy),” Small said. “There is a designated spot once it comes.”

Small has helped Illinois through some of the worst times of the season and he’s followed that up by coaching the team to some of their best performances of the year.

The first instance came in the middle of the spring season when Illinois tied for eighth and fifth at two-straight tournaments. The team’s eighth-place finish was its worst of the season.

“As a coach, I want to be sure that this doesn’t become a habit,” Small said after the Southern Highlands Collegiate Masters — the worst of the two tournaments. “We’ll get to the bottom of it and hopefully chalk it up to a tough week.”

After every round, Illinois holds a team meeting to talk about its progress.

“We kind of reaffirm what our program is about, and why we’re here,” he said. “We just need to get our focus and our mindset matched up with our talent level.”

Whatever Small told the team during these meetings has worked this season. Perhaps it has something to do with his ability to emulate his players’ swings and find areas of improvements.

Or maybe his team is just feeding off of his competitive spirit, Assistant coach Zach Barlow said. He is, by the way, “sneaky good” at everything, including basketball and ping pong, and he’s still playing professionally.

No matter the reason, Illinois won three of its next tournaments to win out the spring season. The last win of the regular season also came from one of the more notable coaching moves by Small.

It was in the Big Ten Tournament, when his team suddenly lost hold of a first-round lead in the second round. The Illini were eight strokes behind the leader at a tournament they’ve won six of the last seven years prior to this season.

After day two the tournament, he called a team meeting near a driving range separate from any other team. Every member of the team voiced their concerns about the team’s play, including Barlow, leaders Charlie Danielson, Thomas Detry and the younger players.

“I think a lot of them were scared at the meeting, because I’m sure they were thinking that coach was going to be a little disappointed  — a little mad at them,” Barlow said.

Like before, whatever was said at the 45-minute “gut check” worked. The team shot a course-record 24 under the next day to reclaim the lead and win the Big Ten Tournament.

“The Big Ten Tournament was kind of a microcosm of the season,” Small said. “We played really well all season; we won seven times. At times during rounds, we kind of check out a little.”

All of this helped Small earn his second-straight Big Ten Coach of the Year award and eighth in his 16-year career at Illinois.

There may be times when Small has to regroup his team, but at the end of the day, coaching is more than just a job than to him.

“When I coach, I’m alive,” he said in his 2013 induction in the Illinois Golf Hall of Fame. “My life is very, very full in the game — whether I win or lose.”