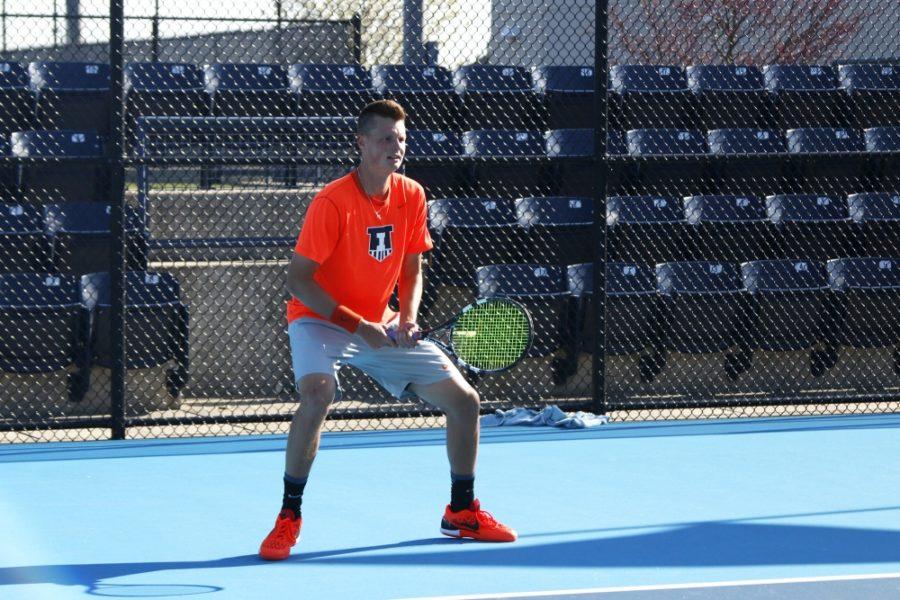 Illinois’ Brian Page (Sr.) waits to hit the ball back during the game against Michigan State at Atkins Tennis Center on Friday, Apr. 15, 2016. The Illini won 4-0.

After a match against Michigan two weeks ago at Atkins Tennis Center, the Illinois men’s tennis team celebrated its two seniors on the team, but one player didn’t feel like that match would be the last at the complex.

Jared Hiltzik said he felt that he and his team would host a regional site.

On May 3, Hiltzik and his teammates found out their NCAA Tournament fate and the result was one that was expected: The Illini will be back at Atkins Tennis Center on May 13, as they are one of 16 teams in the country to host regional matches.

No. 15 Illinois will battle Western Michigan that Friday at the outdoor complex of the Atkins Tennis Center for the second-consecutive season. Western Michigan comes into town as the No. 4 seed in Illinois’ regional.

Sophomore Aleks Vukic said that the environment at Atkins Tennis Center is one aspect that is seemingly always in the Illini’s court.

“The passion that everyone in Champaign has for us is unreal, and it resonates when we play,” Vukic said. “The players feed off that, and I’m looking forward to it.”

Illinois went 11-2 at home over the course of the regular season and have only lost three home matches in the last two seasons combined.

The Illini finished the 2015-2016 regular season with 19 wins with an 8-3 conference mark. The team finished at .500 away from Atkins Tennis Center.

Illinois’ only two defeats at home during the regular season came against No. 5 TCU and No. 14 Texas A&M..

Despite the 10 losses, the Illini did have their share of marquee wins over the season.

The first one came against the now-No. 1Virginia Cavaliers in February. Illinois won that match 4-3.

With wins over South Florida and Baylor early in the season, the Illini ended the nonconference season with wins over high-profile teams and held their own in the matches they lost.

Entering the Big Ten season, the Illini had a target on their back as the defending conference and tournament champions.

Illinois started off with a tough road match against Northwestern, who ended up with the best season in their program’s history.

The Illini lost 4-3, but followed that up with a sweep of Indiana in their second Big Ten match of the season.

A win against the Hoosiers marked what would be a nine-match winning streak for the Illini, eight of those matches being in the conference.

During the winning streak for Illinois, the team would go on to sweep six-straight opponents. Nebraska ended the string of sweeps for the Illini, as the Cornhuskers took the doubles point.

After going 2-2 to end the season, the Illini were looking to repeat last season’s Big Ten Tournament magic and repeat as tournament champions.

After losing the doubles point, the Illini tied the match up, as sophomore Aron Hiltzik became the only man to defeat an Ohio State player during the course of its season.

Now entering the NCAA Tournament, the Illini are riding momentum and have the first two rounds of the regional tournament at home with a chance to go to the Sweet Sixteen on the line.

A win over Western Michigan would put the Illini into the round of 32, where they would take on the winner of No. 22 Mississippi State and Memphis.

Head coach Brad Dancer said that playing in front of the home crowd is the only thing that matters to him and his team and is what they are really looking forward to doing.