Watching Simon: The state of Illini football a year later 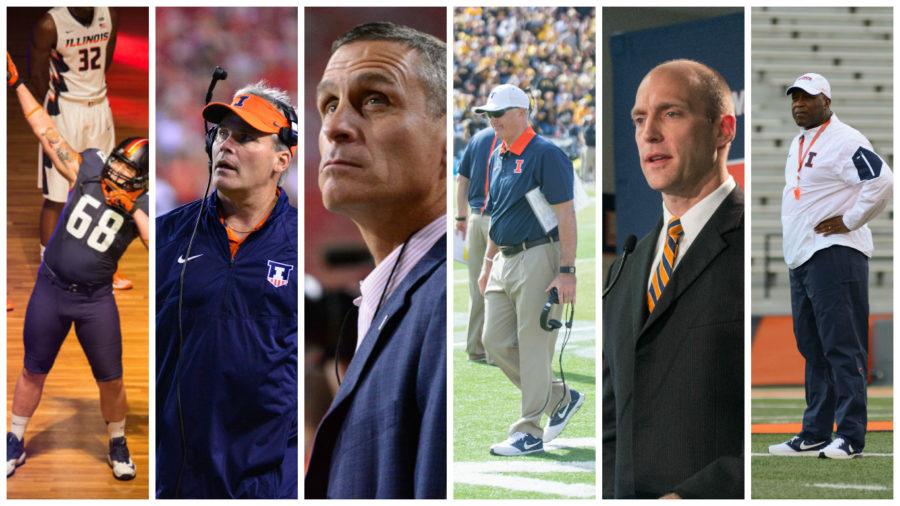 Editor’s note: Peter Bailey-Wells was The Daily Illini sports editor from March 2015-March 2016. He covered Simon Cvijanovic’s accusations of mistreatment at the hands of Tim Beckman and much of its fallout in the past year.

If hindsight is 20/20, foresight needs a new pair of glasses, especially when it comes to Illini athletics.

One year ago Tuesday — May 10, 2015 — very few people could have predicted what was about to happen to Memorial Stadium: A lightning bolt was about to hit.

Because it was one year ago that Simon Cvijanovic, behind the Twitter handle @IlliniSi and an official football team mugshot, took former head football coach Tim Beckman to task.

What followed was a year unlike any other in Illini football history.

You know the story. The four-year starter angrily claimed mistreatment under Beckman, former offensive coordinator Bill Cubit, medical trainer Toby Harkins and other members of the coaching and medical staffs.

I stopped playing football because of my physical health. I was asked to push myself past pain until I didn’t want to play anymore. #truth

Cvijanovic’s actions drew attention and soon, everyone was watching Simon.

The response, of course, was mixed. Many former and current players outwardly disagreed with Cvijanovic’s assessment of Beckman, including, and perhaps most significantly, Ted Karras, a former roommate of Cvijanovic.

Simon quit on his brothers when we needed him most. These coaches let him stay on scholarship to finish his degree. #truth

Cvijanovic took on all comers on Twitter that day, fighting with fans, former players, current players and people unrelated to the program who questioned his account and often, his toughness. He ended the night by pointing out he had a project due the next day (the first day of finals week) and left many of us wondering what we’d just witnessed.

That night, center Alex Hill, a member of the class of 2015, tweeted the most prophetic thing of the night, the week and perhaps the year.

This is the calm before a very dark and bad storm. Prepare urselves

A former Illini who wanted his name kept off the record said to me on May 10, “Be ready for more guys to come out … Mostly Zook guys. Current players may not want to expose themselves.”

During a teleconference the next day, former Athletic Director Mike Thomas said that Cvijanovic’s claims would be investigated and that they were an “attack” on Beckman’s character. Thomas added that the internal investigation would not be made public.

Cvijanovic continued to tweet on May 11. He included a tweet — that he later deleted — comparing Beckman’s treatment of his players to conditions in North Korea. His prolonged denouncement of the coaching staff continued to draw criticism and support in equal measure.

He discussed his own injury further, mentioned his brother’s experience as a diabetic under Beckman and expressed his hope that NCAA athletes unionize.

So, about 24 hours after his first tweet, the world had heard a lot from Cvijanovic, a little bit from Mike Thomas and nothing from Tim Beckman beyond a statement that noted that he would, “continue to treat the players in our program, current and former, like family as we continue to move forward.”

On Wednesday, May 12, former Illini Nick North added his voice to those denouncing Beckman. He told The Daily Illini that Tim Beckman “took the cake” as the worst coach he had ever met.

Former players from Toledo, Beckman’s previous head coaching locale, added that they thought Beckman unfairly targeted players he didn’t like. Both the former Toledo players and North remembered “The Terminator Sheet,” which, if signed, meant a student-athlete was giving up his scholarship. Beckman supposedly threatened North with the sheet several times.

Several other media outlets, local and national, picked up the story and soon Beckman’s supporters were backpedaling, deleting tweets and slowing down their supportive rhetoric.

The next day, May 13, then-Chancellor Phyllis Wise announced that the University, at Thomas’ request, had hired law firm Franczek Radelet to independently investigate Beckman.

Wise’s announcement served as the University’s first validation of Cvijanovic. They’d been watching Simon and they deemed his allegations legitimate enough to warrant some examination.

At the time, it was tough to know how things would go for the Illini, but it certainly looked like Beckman was in hot water. Mike Thomas didn’t seem culpable in the case beyond ignorance, which, at a University the size of Illinois, isn’t an unrealistic claim.

Then, the following Monday, May 18, The Daily Illini published a story on further claims of coach mistreatment made by former members of the Illini women’s basketball team against coaches Matt Bollant and Mike Divilbiss. The former players had been watching Simon too, and they deemed it time to bring their complaints, which they felt hadn’t been addressed by the University, to the public.

Those claims prompted another independent investigation, and all of a sudden it looked like Illini Athletics was in hotter water than we’d previously thought.

The summer and the fall

Things only got worse for Mike Thomas and Co. during the summer months. On June 8, former soccer player Casey Conine sued Thomas and soccer coach Janet Rayfield in connection with mistreatment of a concussion she suffered at Illinois.

The investigation cleared Bollant of any wrongdoing — on April 12 this year, the University settled with the former players for $375,000.

But that lawsuit didn’t resolve itself before Wise, one of Thomas’ staunchest supporters, resigned on Aug. 6.

And just weeks later, on the prompting of the preliminary results of the Franczek Radelet investigation, Thomas fired Beckman and replaced him with Cubit six days before the Illini’s scheduled season opener against Kent State.

Cubit guided the team to a 5-7, but not before the final report on football mistreatment was released and Thomas was dismissed by Interim Chancellor Barbara Wilson.

The final report exonerated Cubit of any blame and on Nov. 28, Interim Athletic Director Paul Kowalcyzk gave Cubit a two-year extension and uttered the infamous “it’s not ideal, but…” line.

Cubit’s Illini proceeded to lose 24-14 later that day to Northwestern, ending the season one win away from a bowl berth.

Not a pretty picture.

Cvijanovic was silent during the fall — his only tweet during the months of autumn came on the day of Beckman’s dismissal. He didn’t weigh in on the final Franczek Radelet report and had nothing public to say about Cubit’s extension.

But the dominoes he had set in motion hadn’t all fallen yet.

Fast forward through a miserable basketball season and Wilson’s search for an athletic director seemed to be concluding. On Feb. 17, the University announced Josh Whitman, of Division-III Washington University in St. Louis, would be the next man to lead the athletic department.

The former Illini was all smiles at his introductory press conference, bringing his old Illini helmet and a new Illini hashtag: #WeWillWin.

Whitman claimed he was ready to move on from the events of the last nine months, but it’s hard to believe he wasn’t watching Simon too. Social media had brought the Illini athletic department crashing down around itself and in Whitman’s aim to build it back up, he seemed ready to use social media.

He announced his return to campus by tweeting a series of photo with Grange Grove, Memorial Stadium, Bob Zuppke’s grave and the Alma Mater statue.

The next month was clearly a whirlwind for Whitman. He met with former players, former teammates, donors, fans, alumni and, we found out later, Ron Turner. His former coach introduced the fresh-faced athletic director to Lovie Smith, the recently fired head coach of the Tampa Bay Buccaneers.

And, the rest, as you all know by now, is history.

Two days later, March 7, he hired Lovie Smith. And he announced it via Twitter.

We’ve seen a precipitous fall and a rocket-propelled rise in the 12 months since Cvijanovic’s tweet barrage.

If I could time travel, I would go back to the days leading up to May 10 and tell my past self what was coming, just to see his reaction.

“Former Peter, do I have a story for you…”

And I don’t think I would have believed that in a year, Lovie Smith would be patrolling the sidelines of Illinois’ spring practices as the school’s head coach.

Simon Cvijanovic hasn’t tweeted since Whitman fired Cubit on March 5. His tweet from that day indicated happiness at Cubit’s dismissal. Since then, fewer people have been watching him — his number of  Twitter followers has dipped down below 2,000 — and many have moved on from his outburst a year ago.

But a year ago, few of us knew what the future had in store. We had just begun watching Simon.