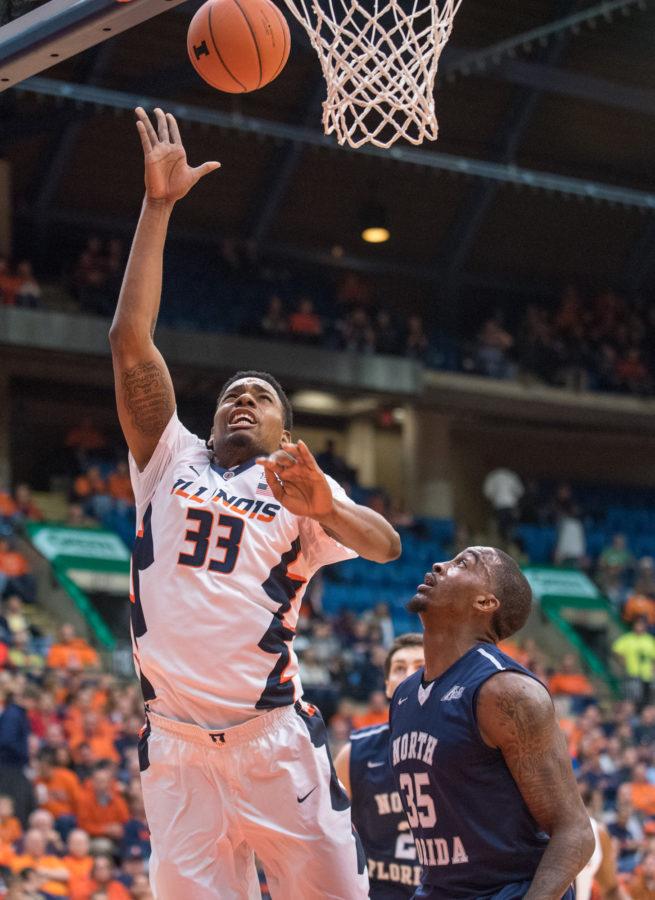 Mike Thorne Jr. beats a defender and makes a shot off the backboard during the game against North Florida at Prairie Capitol Convention Center on Friday.

Mike Thorne Jr. will be playing for Illinois basketball for a sixth year.

Thorne suffered a knee injury against Iowa State in November. Thorne then returned for 16 minutes against Indiana in January. That appearance caused doubts that he would get the medical hardship waiver.

“Now (Thorne) will get that chance to come back for a sixth year and finish his college career in the way we all envision.” Illinois head coach John Groce said in a press release.

I give all the thanks to God! pic.twitter.com/uvHBq0svko

Thorne averaged 12.9 points a game and 8.5 rebounds a game in eight games last season. Two of those were double doubles for Thorne.

The six-foot-11 center will help on the boards for the Illini, who ranked 13th in the conference in rebounding margin, only ahead of Rutgers. He will also be paired with six-foot-seven Leron Black, who also missed most of last season due to injury.

Black will be serving a six game suspension after pleading guilty to a misdemeanor earlier in May.

Thorne transferred to Illinois last season after playing at UNC Charlotte for three prior seasons. Thorne was the team’s leading scorer in his final season in Charlotte.