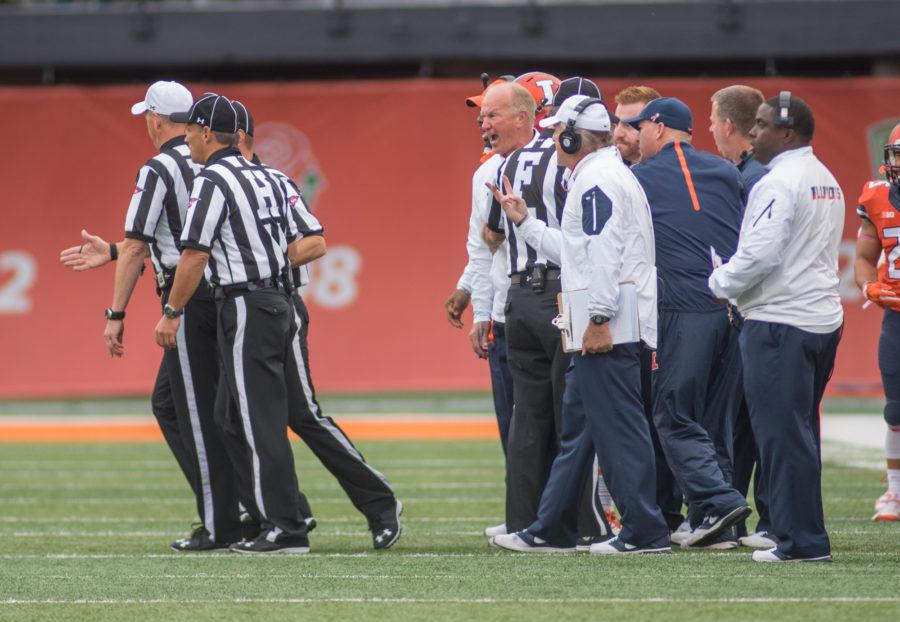 Head coach Bill Cubit disagrees with a call and has to be held back while he screams at the referees during Illinois’ 14-13 win over Nebraska on Saturday at Memorial Stadium.

CHICAGO — Bill Carollo, the Big Ten’s Coordinator of Football Officials, brought in a symphony to perform in front of conference referees earlier this year. But the ensemble wasn’t there to entertain: It was there to train officials.

One of the most stressful times for a football referee is those seconds after a questionable call, when a coach often fills a referee’s face, berating him about the decision. With a scenario that’s difficult to recreate and the magnitude of the moment impossible to replicate, Carollo has resorted to more unconventional tactics in means of training officials.

As Carollo has trained his referees to focus more, so the conference’s targeting call has been adapted as well: The parameters for the penalty remain the same, but the process to make sure the right call is made has expanded this season.

“The officials will continue to err on the side of safety, throw the flag when we have to,” Carollo said. “If it gets reversed I’m okay with that. We want to get that call right. But we’re giving the replay official more authority in the booth to look at all aspects of targeting, not just whether was it with force or was it the crown or was it below the shoulders, but was he defenseless? That’s a key area.”

Other changes from last year include officials being able to throw a flag for targeting after watching the replay, and players who slide feet first are now categorized as defenseless under the targeting rule.

Carollo said there were 21 targeting calls made in both Big Ten nonconference and conference games. Each of those plays went under review, and on nine occasions, the call was reversed.

“We are not looking to throw players out,” Carollo said. “All these changes have to do with player safety.”