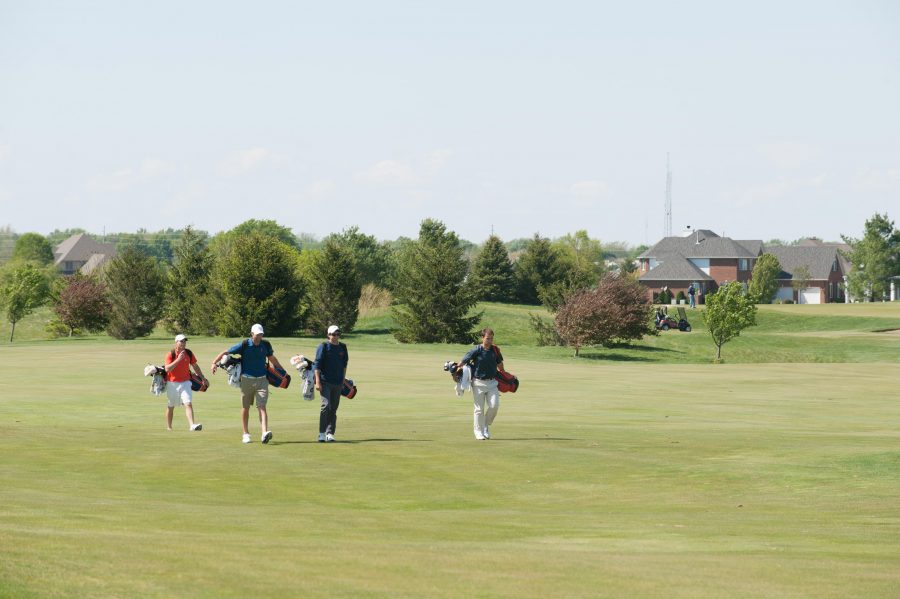 Members of the Illinois men’s golf team walk along the first hole at the Stone Creek Golf Club in Urbana on Wednesday, April 18, 2012.

The Illini are coming off a record seven-win season and a heart-wrenching loss in the NCAA championship, in addition to losing two of their best players to graduation.

But Barlow’s mindset is on food and championships.

Chipotle has been a longtime favorite of the Illini’s, especially for the international players such as Italian sophomore Edoardo Lipparelli and 2016 Belgian grad Thomas Detry.

Besides the traditional Chipotle run, Illinois is retaining some of its number three and four players from last year’s lineup. Juniors Dylan Meyers and Nick Hardy, both of whom played a key role in helping the team along its NCAA run, will lead the team as the veterans. They shot the Illini’s third (72.13) and fourth (72.62) lowest stroke averages during the 2015-16 season, respectively, behind recent grads Charlie Danielson and Thomas Detry.

“Not to speak for them (Meyer and Hardy), but I would say they want that national title,” Barlow said. “They’ve been close enough these last couple years to taste it and couldn’t quite get it.”

Hardy and Meyer are now the oldest players on the team, competing on Illinois squads that finished tied for fifth and third in the NCAA tournament the last two years.

Lipparelli and Trevor Gold will join the two on their journey to win Illinois’ first national title.

Lipparelli did not play in every tournament last year, but he still posed a big challenge to then-redshirt senior Alex Burge for the fifth spot in the lineup. Sophomore Gold did not have any tournaments appearances in his freshman year.

Taking Lipparelli and Gold’s spot as the freshman on the team are: Bryan Baumgarten of Granite Bay, California, Michael Feagles of Scottsdale, Arizona, and Giovanni Tadiotto of Belgium.

Barlow said Hardy and Meyer will help the new Illini get acclimated to their new team and college life.

“Nick and Dylan, I guess you could say are more than capable of taking the reins,” Barlow said. “They’ve matured well.”