From Beckman to Lovie: a total 180 for Illinois football 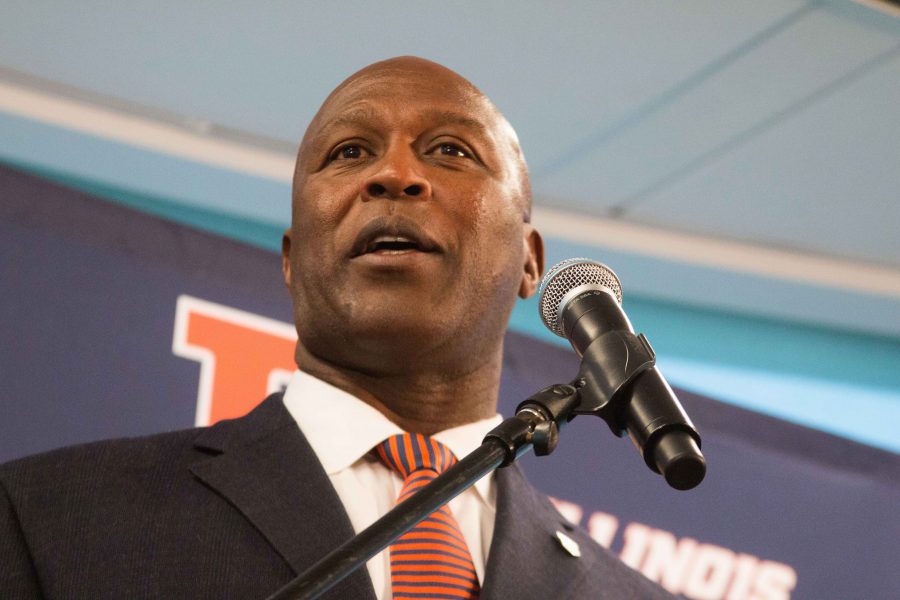 Lovie Smith responds to questions at his press conference on March 7, 2016.

The morning Lovie Smith was hired as Illinois’ head football coach, my dad called me, excitedly saying we were all over Chicago sports radio stations.

An Illinois alum, he instilled in me a love of Illini sports since I was a kid. I got to to stay up late to watch the 2005 basketball tourney run, and we went to the 2007 Rose Bowl loss, stuck in a section filled with USC fans throwing a peace sign meant to be a “V” for Victory hand gesture the entire game.

Yet, since the Rose Bowl season, Illinois football has hardly had a wow moment.

But the hiring of Lovie led to the Chicago media and its audience talking about the Illini in a positive light for the first time in a long time.

Illinois football was relevant again, and that’s an exciting thing.

Before Lovie’s introductory press conference in March, there was a pep rally in the Illini Union. The room was packed with students and fans alike, clamoring to take a photo or even get a glimpse of the Illini’s savior.

I’d never seen anything close to such a response for any Illini team during my three years on campus. Lovie’s energy took over the crowd and the man had only been head coach for mere hours.

The past year has been one non-stop media circus. Between firings and hirings, and almost a year of uncertainty both on the field and in the office, Illinois athletics constantly made fans ask, “What next?”

So Lovie’s hiring left us all dumbstruck, but it also woke Illini fans up. The Union pep rally was merely the beginning of a shift toward optimism that will see its first on-field results in just two weeks.

In the years before these scandals and failures, my old editors had nothing crazy to write about. It was plain old crappy football — day-in and day-out.

While I grew up watching and loving Illinois sports, my time in college has been spent covering them. And it hasn’t been an easy run.

As a journalist, I’ve been given plenty of content this past year. We’re one of the few college newspaper football’s staffs in the country that can say we’ve covered almost more firing and hiring press conferences than actual home games.

It was an endless cycle of hoping I’d be awake when I got the email about the next piece of breaking Illinois sports news. I’m not exactly a morning person, and Illinois had a tendency to announce these things when I was just waking up.

So there were more than a few mornings when my roommates saw me running out the door, one shoe on, yelling, “It happened again!”

While I’m sure my confused neighbors didn’t appreciated the wake-up call, I’m still thankful for the experience.

But as a student and Illinois fan on my off days, I’m finally excited about where the program is heading.

Because when I’m at home listening to the radio with my dad over the summer and they mention “Lovie this,” or “Lovie that,” it’s pretty cool to know that a positive spotlight is finally back on Illinois.

And there’s a potential for a whole new generation of fans, filled with girls and their dads, to get excited about whatever Illinois sports has in store for the future.