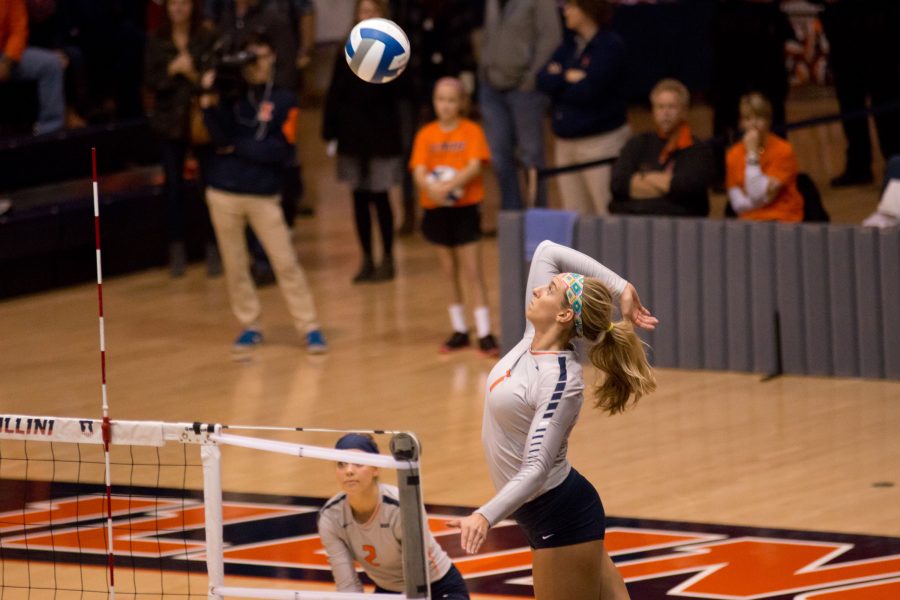 Former Illinois Jocelynn Birks gets ready to spikes the ball during the match against Wisconsin at Huff Hall on Wednesday, Nov. 18, 2015.

One thousand, nine hundred and seventy two kills and 5,656 attacks later, Jocelynn Birks’ career at the University is finally over. Birks finished her time in Champaign as Illinois’s all-time kills and attacks leader.
Head coach Kevin Hambly and his team find themselves on the cusp of ushering in a new era of volleyball — one that won’t include the 6-foot-2 outside hitter from Willow Springs, Illinois.
“She cleaned up a lot of stuff,” Hambly said. “No one knew if Jocelynn would be Jocelynn before she was. That’s why you get a lot of talent. Someone will figure it out. I think (her graduation) is good. We’ll have more balance.”
Birks’ career, along with five other seniors, ended when Illinois was defeated by Big Ten foe Minnesota in straight sets last December.
It has been over eight months since the Illini fell short of their championship expectations, and during that time the team has changed.
The Illini landed the 22nd-ranked recruiting class with the additions of 35th-ranked Kaylin Korte and 86th-ranked Jacqueline Quade. Both are outside hitters.
Hambly believes Korte will compete for a starting spot this upcoming season. He compared the new recruit’s style of play to that of Illinois’s second all-time kills leader Laura DeBruler.
“I’ve been (with the team) all summer,” Korte said. “It’s a change from going to club (volleyball) in high school. I love how competitive it is. Throughout my years here, I want to be able to set records.”
The high turnover of seniors will also open the door for a few returning athletes to build on the individual successes they had last season.
Sophomore Jordyn Poulter had an impressive freshman campaign, tallying 1,088 assists and 223 digs.
Her standout play on the court solidified her spot on the Big Ten All-Freshman Team and also called for her to be crowned the Illinois Female Newcomer of the Year.
“It’s hers,” Hambly said. “It’s (Poulter’s) team.”
The sophomore setter led the Illini in assists in all but seven matches and according to her head coach, Poulter will have plenty of options with the growth of seniors Naya Crittenden and Katie Stadick.
Hambly also said that he expects defensive specialist Brandi Donnelly to have a breakout season. The 5-foot-8 junior led the Big Ten with 331 digs in conference play and was the only Illini to start all 34 matches.
Her consistency last season allowed Illinois to start the season 3-0 against non-conference opponents at the Illini Classic, but that success did not translate over to conference play.
Though the team defeated Maryland and Nebraska in straight sets, Illinois struggled to sustain success against the rest of its Big Ten opponents.
Hambly’s squad finished the season with a 10-10 conference record and a 21-13 record overall.
Despite making it to the Sweet Sixteen for three consecutive years, Hambly will look to rebound from a very up-and-down campaign during his eighth season as head coach.
“I hate it. Sixteen, that number, I’m really considering getting rid of it on our jerseys,” Hambly joked. “(McKenna Kelsay) has it now, but it may go away. I don’t like that number. I don’t like second either, because we’ve been that a lot.”
Five years ago, Illinois was one match away from becoming national champions, but a loss to UCLA in the final meant that the NCAA title would never make its first trip to Champaign.
Hambly made it clear that winning isn’t his only motivation.
He admitted that a second-place trophy sits on his desk every day, and that he’s endured too many early exits from the NCAA tournament.
Experiencing one Sweet Sixteen loss in her lone season with the Illini, Poulter echoed the sentiments of her head coach and expects to lead her team to higher accomplishments this year.
“As a collective group, we kind of have this motto of, ‘Screw the Sweet Sixteen,’” Poulter said.
[email protected]