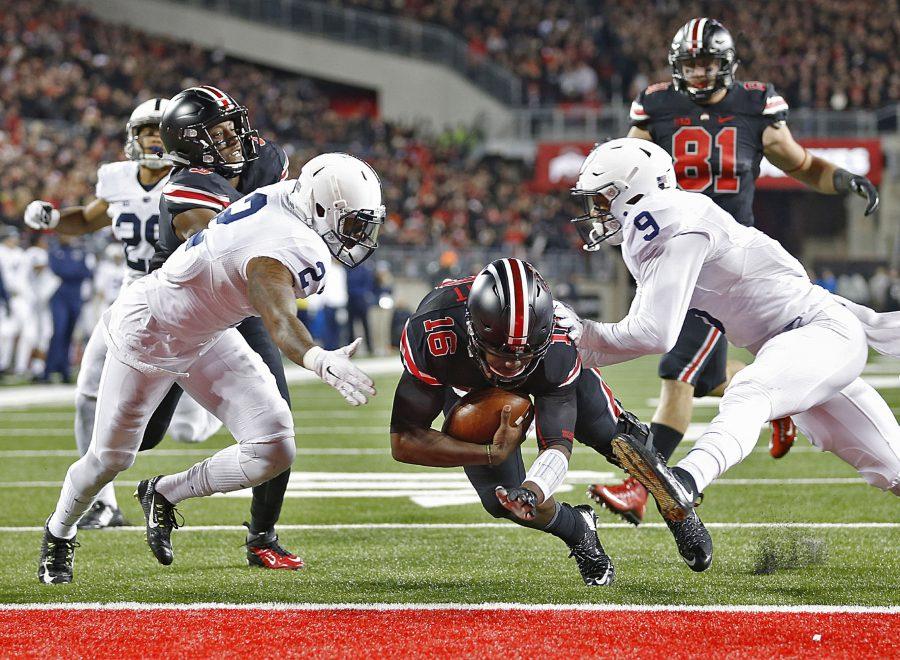 Harbaugh is not the only figure or team set to make it another wild and wacky season in the Big Ten. The renewed Ohio State-Michigan rivalry, Jabrill Peppers’s Heisman candidacy, the beginning of the Lovie Smith era at Illinois and Iowa’s division title defense all serve to make it a fascinating season in the conference. In that vein, here are ten bold guarantees for the 2016 Big Ten season.

1. Michigan and Ohio State both go undefeated in conference play until Nov. 26

Armed with sky-high expectations for runs to the College Football Playoff, the Wolverines and Buckeyes will, for the most part, steamroll to their final meeting on Nov. 26. Notwithstanding Ohio State’s road loss at Oklahoma, both teams manage to get to the finale 16-0 combined in the Big Ten. Both also enter the game ranked in the Top 10 of the CFP rankings.

2. Michigan still cannot get past the Buckeyes
The inevitable end-of-season showdown between Urban Meyer and Jim Harbaugh will decide the Big Ten East and will be the most important game between the two rivals since 2006. The difference in the game will come down to the quarterbackposition. Ohio State has an established quarterback in J.T. Barrett, while Michigan is still in the midst of a pre-season position battle. Whoever emerges as the starter for the Maize and Blue — Wilton Speight or John O’Korn — will be a solid option, but neither have the playmaking ability of Barrett.
Ohio State extends its streak over Michigan to five games with its 12th win in the last 13 meetings. The game happens to be one of the best of the entire season, and resurrects the rivalry back to the glory days of Hayes vs. Schembechler.

3. Michigan State beats Notre Dame on Sept. 17
The Spartans come away with one of the first victories to throw the CFP into chaos in a gutsy road win in South Bend. Here, first year starting quarterback Tyler O’Connor becomes a Connor Cook clone — a quarterback that may not be flashy but nonetheless gets the job done and does not commit silly turnovers. O’Connor’s emergence in this game, coupled with Michigan State’s predictably dominant defense make them a force in the Big Ten East. Mark Dantonio’s squad manages to come away with double-digit wins as they always do, and have a realistic shot to beat Michigan and Ohio State.

4. Saquon Barkley emerges as a Heisman candidate
Christian Hackenberg was supposed to be the guy that transformed Penn State into a national power once again. While he had a few decent seasons, Hackenberg will mostly be remembered as a quarterback that failed to live up to the early expectations. Now, with Hackenberg in the NFL, running back Saquon Barkley is set to be a star for Penn State.
With an inexperienced starting quarterback in Trace McSorley, Barkley will bear a larger brunt of the offense. The sophomore has a prime opportunity to make a surprise run for the Heisman Trophy.

5. C.J. Beathard is the best quarterback in the Big Ten
Of all the quarterbacks in the Big Ten, Beathard is the guy people always overlook. He had a fantastic 2015 season, leading the Hawkeyes to the Rose Bowl. Beathard tossed for 2500 yards with 15 touchdowns and four interceptions. More impressive were his numbers in the fourth quarter where he had zero interceptions all season with a completion percentage of 67 percent and a QB rating of 182.2.
Beathard should have an even better season in leading his team to back-to-back appearances in the Big Ten title game.
By season’s end, he will be considered a top quarterback prospect in the NFL Draft.

Dan is a graduate student in Media.
[email protected]