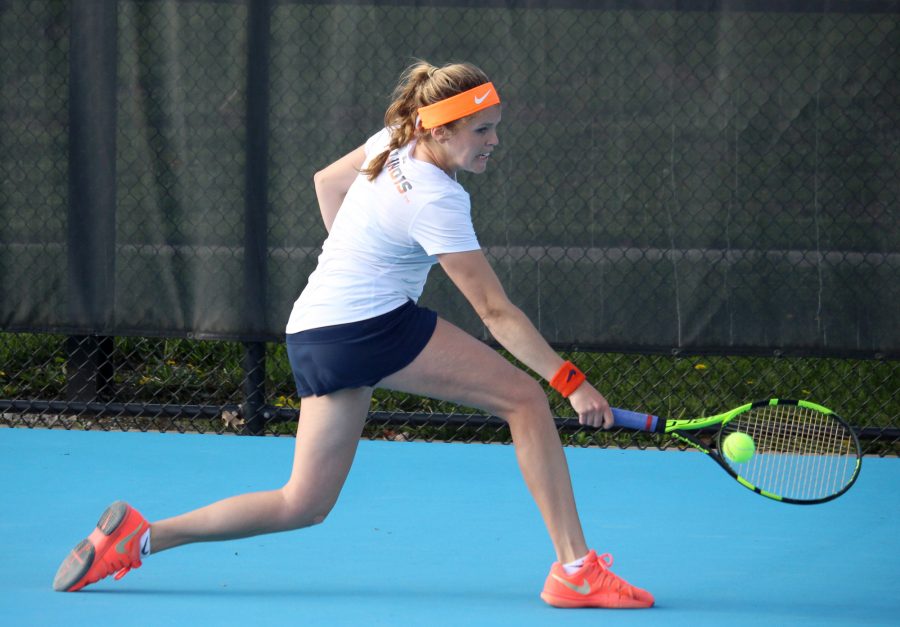 Justin Wolfe | The Daily I

Illinois' Jaclyn Switkes returns the ball in the match against Michigan State at the Atkins Tennis Center on April 22.

The Illinois women’s tennis team is looking to build off one of their most productive seasons since 2012.

The Illini already made strides over the summer, officially naming Evan Clark the head coach in June. Clark has been with the Illini since December 2014, when he started as an assistant. He was then moved up as the interim head coach in place of Michelle Dasso.
“I am extremely grateful to Josh Whitman and search committee chair Ryan Squire for allowing me this opportunity and trusting me to lead the Fighting Illini women’s tennis program moving forward,” Clark said in a statement from June. “We will continue to work hard to develop our student-athletes on the court, in the classroom and in all aspects of their life. We all understand that Illinois is a very special place and I am excited to build a program here of which everyone can be proud.”
Clark led the Illini to a fourth-place finish in the Big Ten regular season as well as a Big Ten tournament semifinal appearance as the interim head coach. Clark will also be bringing back assistant Kelly Cameron, who joined Clark prior to the 2015-2016 season.
“I am extremely pleased to be able to bring Kelly back to the Fighting Illini women’s tennis program,” Clark said in a statement from July. “We have achieved a lot of success together, both when she was a player and most recently this past year as my assistant. Kelly had a huge impact on our program during the 2015-16 season and I know she will help our program achieve success at the highest level.”
Along with retaining their coaching staff, the Illini will have many returning from last year’s roster. Top doubles and singles player Louise Kwong returns for her senior year, along with captain Alexis Casati, Madie Baillon and Jerricka Boone.
Kwong will most likely team up again with last year’s freshman phenom Ines Vias, who along with Jaclyn Switkes and Daniela Pedraza Novak are returning for their sophomore years.
Illinois’ fall schedule has not been released yet, but the team will look to improve after finishing the spring with an 15-9 record overall and going 8-3 in the Big Ten.
[email protected]