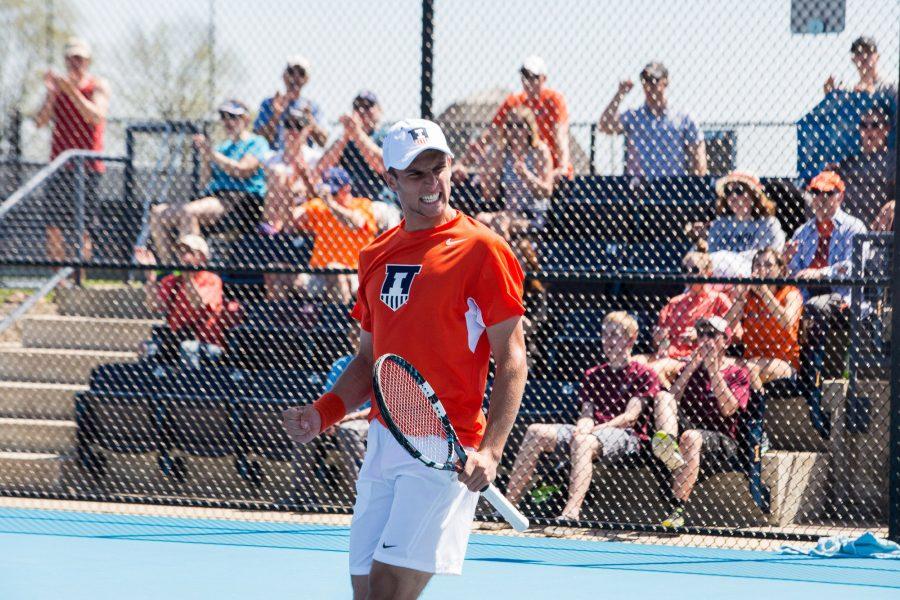 Illinois' Aleks Vukic celebrates after winning against Jathan Malik during the meet against No. 21 Michigan at the Atkins Tennis Center on April 17, 2016. The Illini won 4-1.

The Illinois men’s tennis team, coming off a successful 2016 spring campaign, was led by by Aleks Vukic and Jared Hiltzik last season.

But fans will be unable to watch the graduated Hiltzik at Atkins Tennis Center this season.

Hiltzik’s career came to a close in the round of 16 in the NCAA Men’s Tennis Singles Championship. He ended his time at Illinois as a two-time All-American, racking up 150 total victories.

The Australian native Vukic made it one round further in the tournament before dropping his quarterfinal match to Virginia Tech’s Joao Monteiro. Vukic split time with Hiltzik at the No. 1 singles position last season.

He was a consistent national top-15 player and defeated many high-quality opponents, such as Virginia’s Thai-Son Kwiatkowski and South Florida’s Roberto Cid.

The Illini were 20-11 overall last season, with an 8-3 conference record and a 12-3 home record. The team played many top-10 opponents throughout the season, including Texas A&M, TCU and Virginia.

Vukic will be assisted this year by fellow upperclassmen Aron Hiltzik and Julian Childers.