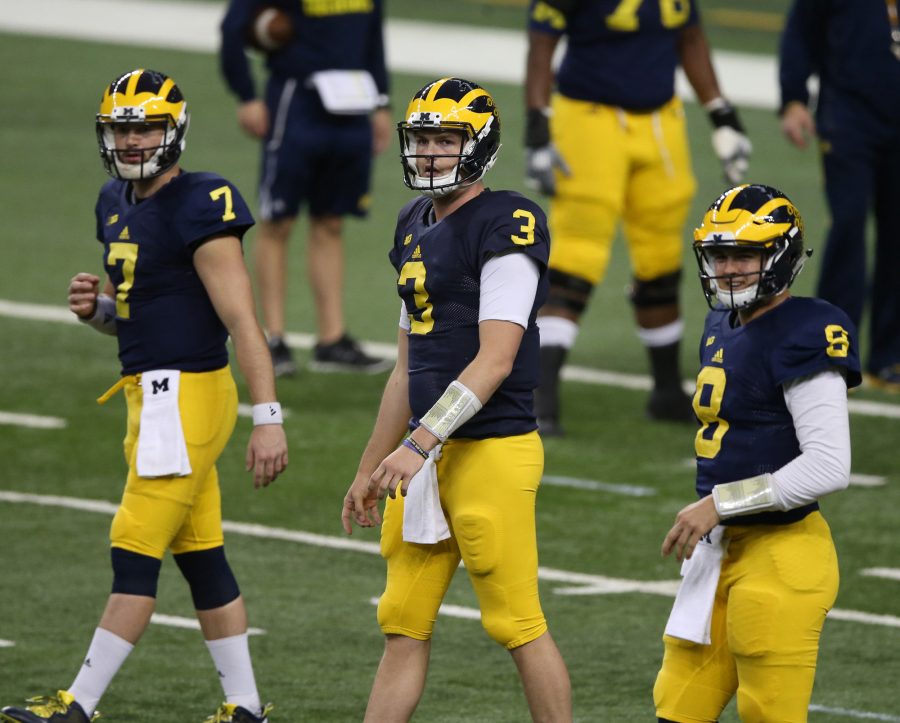 There may not be a more ominous phrase in football — college or professional — than quarterback controversy.

In typical college football discourse, a quarterback controversy typically brings to mind one of two situations: the quarterbacks in competition just aren’t very good or the team in question lacks a real identity at the position.

In the case of Michigan, though, the current quarterback battle the team finds itself quite different than the usual preseason quarterback controversy. Not only does it not feature a competition between two untalented quarterbacks, it may be the rare position battle with the ability to decide the Big Ten and the national championship race.

The quarterback competition between John O’Korn and Wilton Speight is entering its final stages, and Jim Harbaugh has his first difficult decision to make in his Michigan tenure.

Luckily for Michigan, Harbaugh has a history of making the right decision during past quarterback position battles. Last year, Michigan was also in the midst of a quarterback battle, though eventual starter Jake Rudock was always the favorite to win the job.

Harbaugh clearly made the right decision, as Rudock threw for over 3,000 yards and 20 touchdown passes with a quarterback rating of 141. Michigan doesn’t have the same level of certainty this year when it comes to the position, though.

Both O’Korn and Speight represent two disparate offensive philosophies for the Wolverines, with O’Korn the playmaking, big-armed quarterback and Speight as the cautious, yet effective game manager.

If you read the latest reports out of Michigan, Speight is the supposed favorite to win the starting job for the Sept. 3 opener. While that may be the case, one must wonder if that is the right decision.

Compared with Speight (who has only attempted 25 passes in his entire college career), O’Korn is infinitely more experienced with moderate past success.

Prior to transferring to Michigan, O’Korn had a strong freshman season at Houston in 2013. That year, he threw for over 3,100 yards and 28 touchdowns. As a sophomore, he struggled before losing his starting job, which ultimately led to his decision to transfer to Michigan.

If a track record of past production counts for anything, O’Korn should have the inside position to be the starter.

Yet, it would be wrong to completely discount Speight simply based on experience. In limited action in 2015, he came in for the injured Rudock in a game against Minnesota, leading the Wolverines to a last-second touchdown.

Michigan may have just so much talent littered around the field that whomever the starter is might not even matter. Based on the offensive talent on the roster, either quarterback will be in great position to succeed.

With the explosive running back combination of De’Veon Smith and Drake Johnson, and the downfield targets of Amara Darboh, Jehu Chesson and Jake Butt, Michigan’s starter won’t even be expected to be an all-Big Ten signal caller.

Michigan’s stable of offensive playmakers still doesn’t make the decision of starting quarterback any less important. It is crucial for the Wolverines’ college football playoff chances that they find a consistent starter without switching back and forth throughout the season.

Any decision Harbaugh makes in regards to the starting quarterback must be made with Ohio State in mind. Unlike last season, the Buckeyes have no quarterback controversy with J.T. Barrett gearing up for a possible Heisman run.

As it stands now, Michigan appears to have a clear weakness in terms of its quarterback position when compared to its main rival and obstacle to a conference championship and playoff appearance. Neither quarterback candidate for the Wolverines has the explosiveness and experience of Barrett.

This is why Harbaugh should be under immense pressure to make not only the correct decision based on preseason practices but based on which quarterback gives his team the best chance to win the national championship.

It is certainly not an easy choice, but a choice that could have reverberations in mid-January.