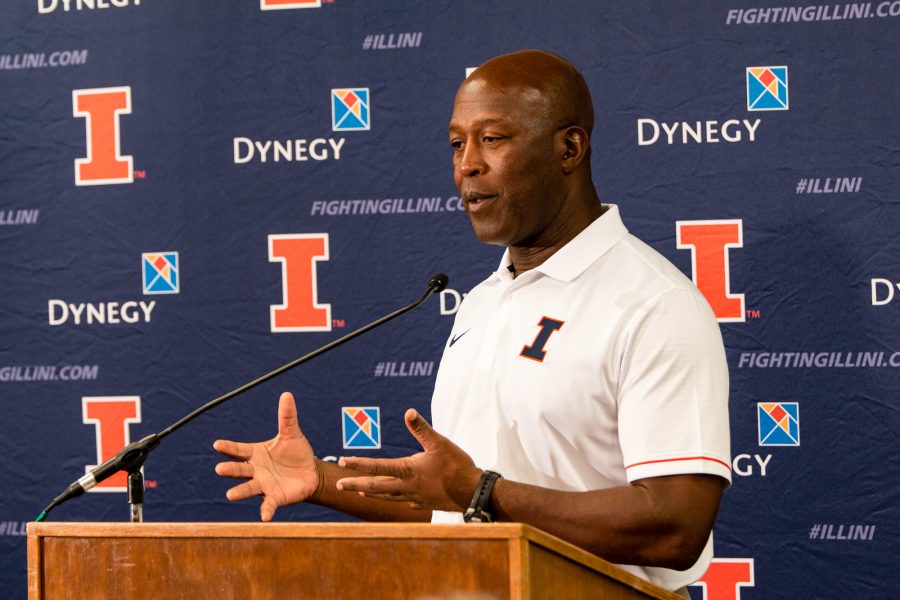 The Lovie Effect is in full swing at Illinois, with the effects being felt all across campus.

A day after recruit Trent Frazier made an appearance with Dee Brown at the final public day of training camp last weekend, the four-star guard verbally committed to the Illini men’s basketball team.

Stepping on the Memorial Stadium turf was just one part of Frazier’s official visit, which included a one-on-one session with senior forward Malcolm Hill.

The meet-and-greet with Smith at Memorial Stadium was the icing on the cake, especially for Frazier’s parents —the die-hard Bears fans were quick to embrace Smith and pose for some photos. Frazier even called his uncle who couldn’t make the trip from West Palm beach, Florida, on FaceTime to share in the moment.

These are the types of impressions Smith and his staff hope to make when it comes to their own recruiting.

As of Wednesday, Illinois has just nine hard commits for the 2017 season, all of whom are three-star recruits, and five of whom are in-state prospects. Thursday is a big day for this year’s class, with two Illinois targets, three-star defensive end Olalere Oladipo and four-star wide receiver Carmoni Green, expected to make their decisions.

“We think we’re in pretty good shape,” Smith said. “We knew we were a little bit behind, and we just started sprinting trying to catch up, and we feel like we’ve done that. We have a good handle on who we want. We have a few commitments and may get a few more before the season starts. But we’re in great shape right now, about where I wanted us to be.”

Following Thursday’s announcements, there may not be much more recruiting noise until next year’s evaluation period. With the recruitment window closing rapidly — Oladipo is one of the top remaining in-state prospects — and the conclusion of training camp, Smith’s focus has shifted to the season.

“This coming Sunday, we get into a true game week,” Smith said. “So we have a couple additional days, and we have a few things we normally do gameplan-wise for this week, which is no different than in the NFL when you go to the final preseason game; you’re really thinking ahead to the next week. That’s where we are, and Murray State is definitely on my mind.”

With the season opener against Murray State right around the corner, Smith has made it a point for the team to have a few days off before the grind of the regular season.

There was no practice Monday, so players could ease into their class schedules. The team will have another day off Saturday.

“I’ll probably just sleep in,” redshirt-freshman offensive lineman Gabe Megginson said. “I feel like I’ve got to catch up (on sleep) for a couple weeks now. You get to a point, especially with camp and then just rolling right into the season, you’re pretty drained emotionally and physically. But once the season fires up, people kind of gain it back and adjust for the season.”