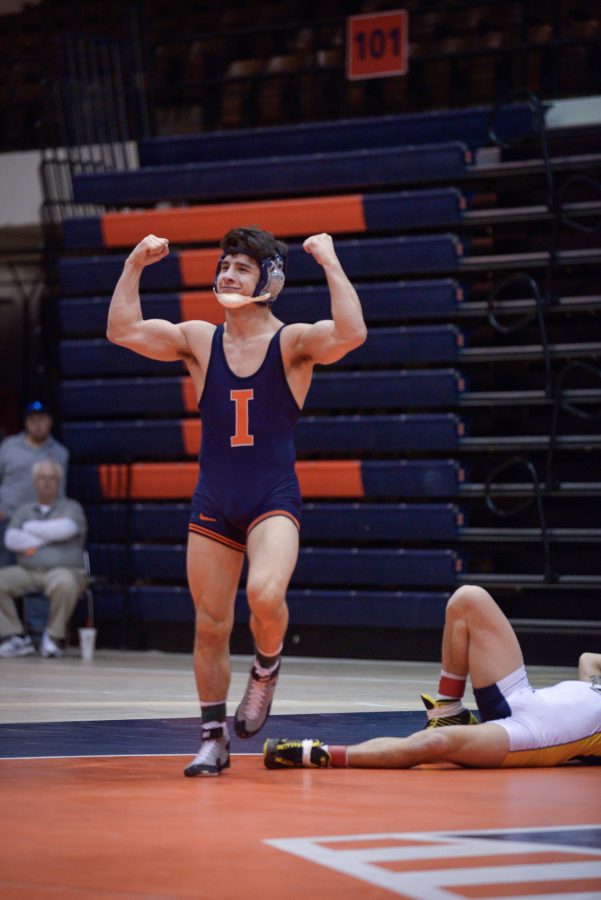 Illinois’ Isaiah Martinez pops off after his victory over Kent State’s Ian Miller during the match at Huff Hall on Sunday, February 15, 2015.The Illini won 38-0.

Here are the four weight classes to watch for this upcoming season.

This weight class certainly was not the one that other squads feared during the reign of Jesse Delgado. Franci Edelin held the spot last year. He goes into the season with the most experience, along with freshmen David River-Kohr and Travis Piotrowski who are starting their wrestling careers. Look for different starters at the lightest weight class.

Fifth-year senior Zane Richards will be looking to top the podium at the end of the season. Richards placed fourth after losing to Oklahoma’s Corey Brewer. Two freshmen are in the same weight class as Richards, but don’t expect to see them competing at 133 unless something happens to Richards.

According to the roster on the Fighting Illini website, Isaiah Martinez will be going into this year at 165 pounds. The two-time champ at 157 pounds, Martinez has been the main attraction for fans of Illinois wrestling for the last two years. One of the most interesting rivalries in college wrestling was Martinez against Penn State’s Jason Nolf. Both wrestlers have only ever lost to each other in their college careers. Time will tell if this weight switch marks the end of this rivalry.

Zac Brunson did not end the season strong when he lost in the fourth round of the consolation bracket at the NCAA tournament. In his final season, Brunson will be looking to finish stronger and hopefully stand at the top of the podium in his weight class.

These four weight classes can be key factors for the Illini. Weight classes 133, 165 and 174 are where the Illini can win most of their points. If Illinois can get a more solid performance out of their 125-pounders, the team can start looking for a top-five finish, or even better.