Ticket sales best in years with Lovie in charge 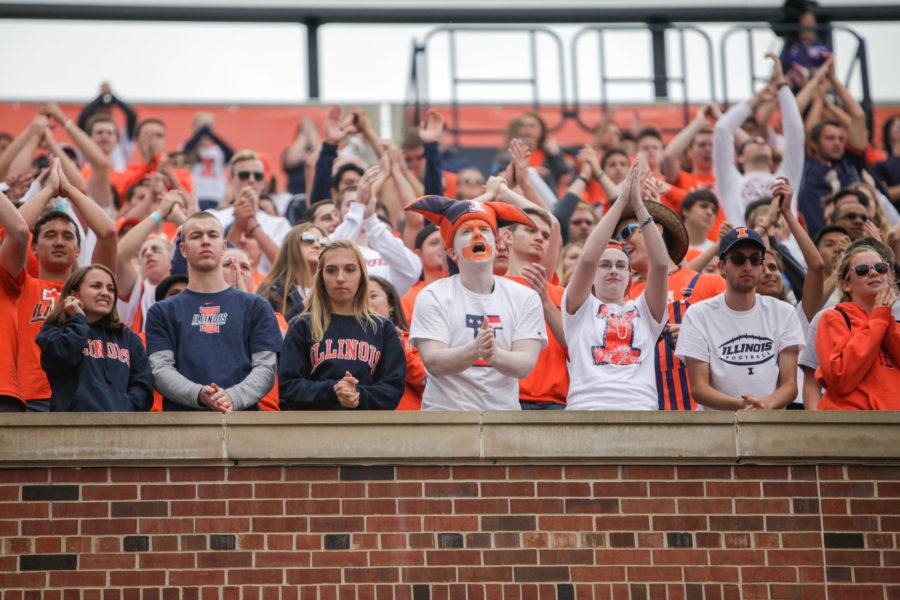 Students in Block cheer on athletes during a football game.

Illinois football finished 12th in the Big Ten in attendance last season. But this year, the program is looking to improve upon its attendance with Lovie Smith at the helm.

A total of 255,883 fans paid for tickets to attend Memorial Stadium, which has a total capacity of 60,670. The team’s percent of capacity was 70.3 percent, which was second-to-last in the Big Ten.

To put that in perspective, Michigan, the NCAA attendance leader in 2015, had an average crowd of 110,168 Wolverines fans waiting for Jim Harbaugh to do something crazy.

That was a five-percent attendance increase from the season prior for Michigan, which had a similar revitalization of its fanbase due to an ex-NFL hire that the Illinois campus is seeing with Smith right now.

“The Lovie Effect” has been a phrase tossed around in the media on a daily basis, and looking at football ticket sales prior to the team’s Week One date with Murray State, Smith’s impact has definitely been felt.

According to Jason Heggemeyer, the associate director of athletics, ticketing and sales and customer service, the expected attendance for Saturday’s season opener is 45,000 and climbing.

Since Smith’s hiring in March, 30,000 season tickets have been purchased, 2,000 of which are unique buyers from last season. Heggemeyer expects season tickets to continue to sell through Week Two. The season ticket purchases are the highest they’ve been since 2013.

The Ticket Office recently capitalized on the excitement surrounding the beginning of the football season with a recent promotion allowing all students the chance to claim a free ticket for the Murray State game.

Heggemeyer said nearly 7,000 students have taken advantage of the promotion and more will do so through the end of the week. With the help of the Ticket Office’s promotion, Heggemeyer expects over 10,000 students to fill the stands on Saturday.

With such a strong student response, Vice President of Block I Ryan Christiansen expects a full north end zone Saturday, along with fans being piled into an overflow section.

An overflowing Block I section could be common scene throughout the season. According to Christiansen, Block I has already sold more tickets than they did all of last season, which totaled out about 2,300.

According to Heggemeyer, over 3,000 students have already purchased season tickets.

“The hype has been surrounding campus since March and is definitely stronger than ever as the first game approaches,” Christiansen said. “In the past, the students seem to get more involved as we enter the conference season, but this season’s non-conference games will be just as exciting with more attendance for Murray State and primetime for UNC. I have been and will continue to work with the DIA to keep the students involved throughout the season to make it the best one yet.”