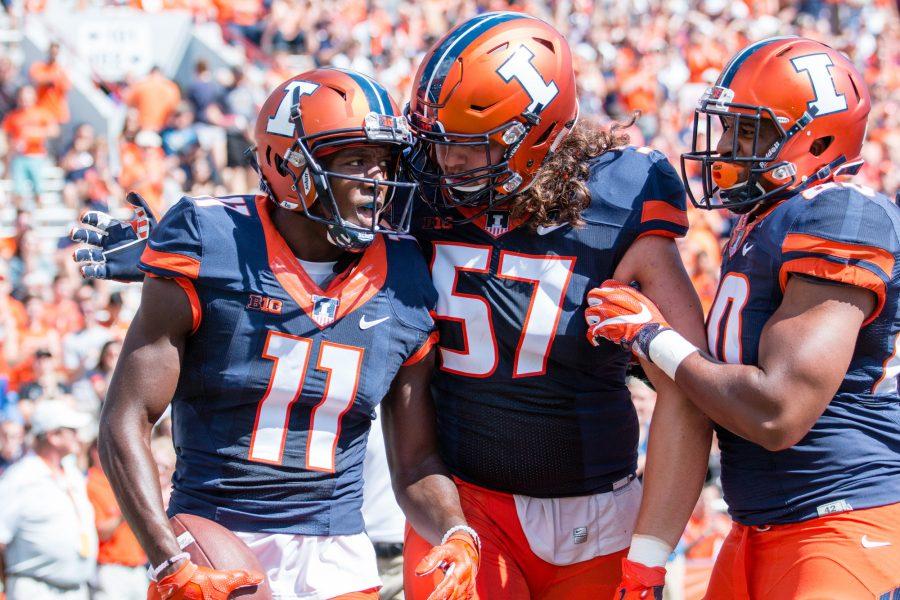 Sophomore Julian Hylton got his first start of his career Saturday at strong safety for the Illinois football team, and it took him two plays to make his presence felt. In that second play, Hylton picked off Murray State quarterback KD Humphries.

Hylton climbed the depth chart towards the end of the off season. At one point he was listed as the No. 3 strong safety.

Head coach Lovie Smith said after the game that he is the fastest player on the team and he can jump higher than any one, and he earned his spot as a starter, but he was still surprised that he was so calm on the field. Hylton credited the Illini coaches for his play on the field.

“I saw the opportunity, and I tried to make the most of it,” Hylton said. “Honestly it was just the preparation that the coaches put us through to get us ready for the game.”

A few minutes later, Illinois quarterback Wes Lunt completed a short pass to Malik Turner for the Illini’s first touchdown of the season, and the first score on their way to a 52-3 win over Murray State.

But the Illinois secondary wasn’t done yet. Free safety Taylor Barton picked off Humphries to end the next drive.

Lunt needed only one pass to capitalize on Barton’s interception. The senior threw a bomb downfield to Malik Turner who caught it in stride and turned it into a 68 yard touchdown – the longest of both Lunt and Turner’s careers. Turner led the Illini in receiving yards with 83 yards and he added two touchdowns. Turner was Lunt’s first look on the play.

“I was reading the safety on the play,” Lunt said. “If the safety came down at all I had a basic over the top throw planned, and Malik made a great play.”

Foster only had 78 career rushing yards entering today’s game, but had 112 yard in two plays against the Racers.

Lunt was pulled in the latter half of the third quarter. He threw for 226 yards, three touchdowns and no interceptions. Sophomore Chayce Crouch took over went Lunt was taken out.

Humphries had a poor start to his senior campaign. He threw for 181 yards, but had no touchdowns. Entering the game, Humphries was the FCS active leader for yards per game with 262.2. The Illini defensive line kept him and the Racer running backs on their heels all game.The Racers finished with -10 rushing yards, compared to the Illini’s 287.

Illini running back Ke’Shawn Vaughn rushed for 49 yards on 14 attempts.

Smith said after the game that the Illini coaching staff would always be pleased with a win, but there was still a lot of work to do for North Carolina next week.

“We are high after a win,” Smith said. “It’s too hard to win. When you win you need to celebrate it like its the Super Bowl, it doesn’t matter what kind of win it is. But we also realize that it is just one. We will be right back at it tomorrow.”