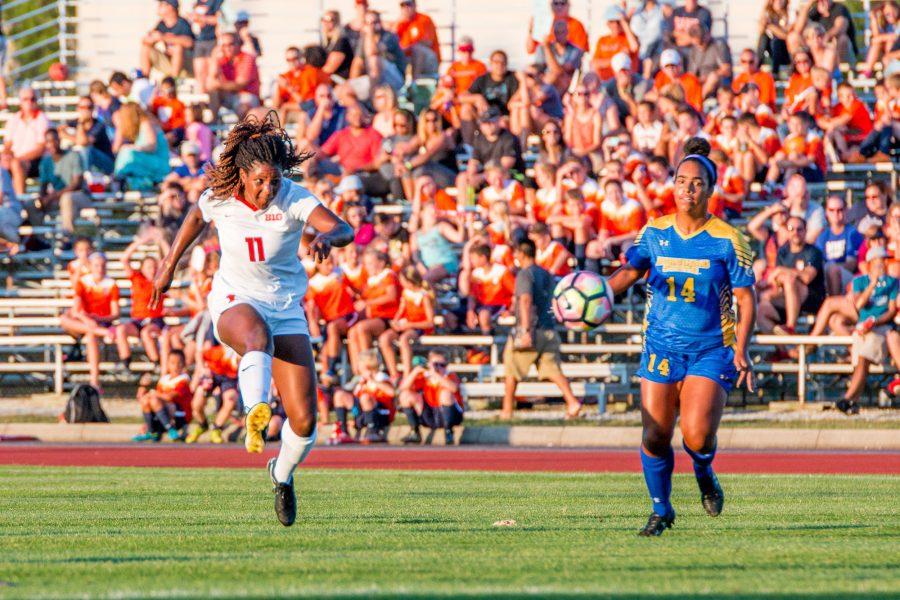 Illinois forward Patricia George puts a shot on goal in the first half of the game against Morehead State at Illinois Soccer Stadium on August 19, 2016. The Illini won 2-0.

The Illinois soccer team headed down to Texas this weekend to take part in one of its toughest road trips of the season.

Illinois lost 2-1 to undefeated TCU on Friday night in the Horned Frogs’ home opener and then fell 2-0 to No. 14 Texas A&M.

“Despite the outcome (Sunday), we showed ourselves the level of soccer we can play,” head coach Janet Rayfield said. “We got better this weekend…we showed improvements in each half we played.”

The Illini lost both of their matches last weekend on a road trip to Missouri, falling to Missouri and Saint Louis. Illinois played stronger and more consistent soccer this weekend, but it wasn’t enough to come out with wins in the Lone Star State.

Illinois fell behind early against TCU. The Horned Frogs entered the match coming off a 6-0 victory against Lamar and carried that success into Friday night.

Junior Emma Hackendorn scored a goal in the second minute to give TCU the lead. The Illini came out strong in the second half, putting up 16 shots to TCU’s five. In the 56th minute, a well-placed corner kick was put in by senior Taylore Peterson for her first goal of the season.

While the Illini put offensive pressure on TCU the entire second half, the Horned Frogs earned a penalty kick in the 73rd minute that Kayla Hill put in for the game winner. The win gave TCU its first 4-0 start in program history.

Illinois traveled to College Station, Texas, on Sunday to face off against No. 14 Texas A&M. The Aggies returned 10 of 11 starters from last season and entered the game without allowing a goal in their last 188 minutes of play. They extended that streak to 278 minutes with a 2-0 victory over the Fighting Illini.

“That team was good enough to beat us if we didn’t come out and have a solid night,” Texas A&M head coach G Guerrieri. “Janet Rayfield is one of the most respected and intellectual coaches out there.”

The Illini were on the attack early on and didn’t allow a shot from the Aggies until the 21st minute, but in the 23rd minute, Texas A&M’s leading scorer Haley Pounds put in her fourth goal of the season to give her team the lead. Pounds then assisted on the Aggies’ second goal from Jordan Hill in the 60th minute.

The Illini put up an offensive push throughout the second half, outshooting Texas A&M 7-3, but they couldn’t manage to put one in. Sophomore Patricia George, who scored her first goal against Missouri last weekend, was the Illini’s strongest offensive threat, with three shots and two on goal.

Illinois created much more offensive pressure this weekend despite the two losses. After being outshot 40-16 on their Missouri trip, the Illini outshot their opponents 31-23 in Texas. Going into the weekend, Rayfield stressed the importance of an attacking mindset. The Illini responded with opportunities but weren’t able to put in enough to come away with wins.