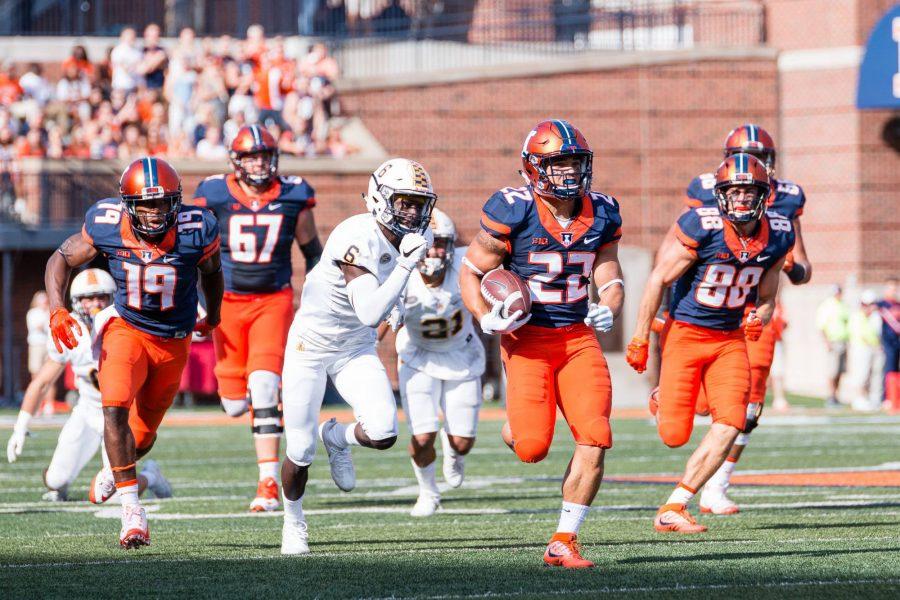 Illinois running back Kendrick Foster (22) runs down the field during the game against Murray State at Memorial Stadium on Saturday, September 3. The Illini won 52-3.

The digits on the back of Kendrick Foster’s jersey don’t only belong to him.

When the Illinois running back officially made the switch from No. 25 to No. 22 this past offseason, he got on the phone to tell the number’s co-owner about the change.

“I got our number, dad,” he told his father, James Foster.

Suiting up with the No. 22 stretched over a pair of football pads has become a father-son tradition for the Fosters.

The Foster name was first paired with the No. 22 when the elder Foster played as the starting running back for Richwoods High School in Peoria, Illinois in the early 1990s. Over a decade later, another Foster donned the same number and played the same position for the same head coach.

The elder Foster kept his number at Iowa Central Community College, which was the No. 6 JUCO football program in the nation when he attended in 1996 and 1997. He then transferred to Illinois in 1998 to play for Ron Turner.

The transfer meant the end of the elder Foster’s run as No. 22 — receiver Rob Majoy owned it at the time — but more importantly, it marked the end of his football career. He suffered a hamstring injury before the 1998 season and didn’t have the option to properly rehab before his eligibility expired.

He never took the field as an Illini.

“It did discourage me on the football field, but the people and friends that I met during that time are people I still talk to today,” James said. “For (Kendrick), being a young kid coming to the University, I think it’s all about that moment — taking advantage of that moment and opportunity that you have because there’s a million kids like you that didn’t have the same opportunity.”

The fans at Memorial Stadium never had a chance to watch the elder Foster play during the Turner era, but the Lovie Smith era has given the Foster name and the No. 22 a second life.

On just four carries against Murray State on Saturday, the younger Foster piled up 118 yards, highlighted by two 56-yard touchdowns.

“He’s done well all training camp,” offensive coordinator Garrick McGee said. “He’s had a really good summer. He came back in training camp in shape, he’s fast, he understood blocking schemes. It didn’t surprise us that he popped a couple runs.”

Although it was his own hard work and dedication that carried him into the end zone twice Saturday, Foster has his father and the rest of his family to thank for being in the Illinois backfield.

Back in November, Foster, frustrated with his lack of playing time, took to Twitter to announce his intent to transfer from Illinois. According to the elder Foster, it was a decision Kendrick made completely on his own.

Once he sat down with his parents and grandparents, Foster realized he had made a mistake and eventually asked former head coach Bill Cubit to return to the team.

“We had a heart-to-heart,” James said. “We just talked about the journey he’s been on and talked about life outside of football and the type of education you can get from the University of Illinois. Football wasn’t the conversation at the time. I just really wanted to paint a bigger picture for him. We all play the game, but before you know it, it’s all over, and then what are you going to do with your life?”

Foster said his decision to stay was largely due to his mother and grandparents who live in Peoria. They wanted them to see him play.

But upholding that father-son football tradition played a large part in his ultimate decision.

“He told me, ‘You’ve just got to show the world what you’re made of — I played at that level, and I succeeded, and now it’s your turn to carry the torch,”’ Kendrick said. “And I’m ready for it.”

Foster’s father lives in Phoenix but comes to Champaign to watch his son play every chance he gets. He’ll be in town for Saturday’s matchup against North Carolina.

At last, James Foster will finally have the chance to see what that No. 22 jersey looks like in orange and blue.

“It gives me goosebumps just thinking about it,” James said.